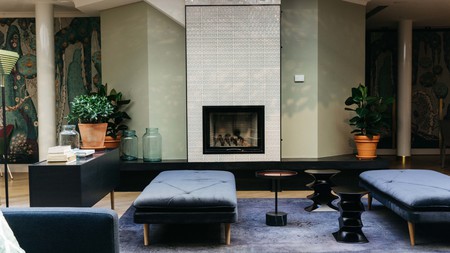 Discover the best hotels in Finland, from boutique design hotels in the heart of Helsinki to family-friendly resorts in Lapland, all bookable with Culture Trip.

Finland is renowned for being the happiest country in the world – and it’s easy to see why. The Nordic country has vibrant cities with world-famous architecture, wild stretches of nature – including some 187,888 pristine lakes – a thriving sauna and wellness culture and it’s even home to Santa and his reindeers. The country’s best boutique hotels celebrate all this and more. From Helsinki to Lapland, read on to discover the best boutique hotels in Finland. 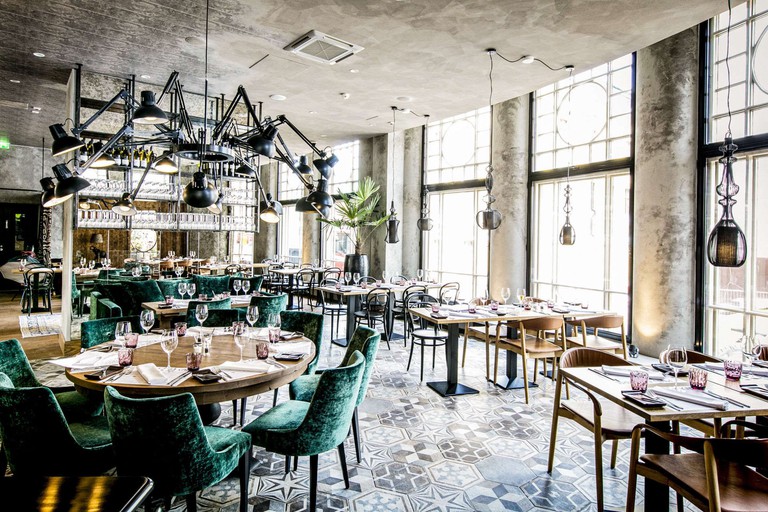 Courtesy of Hotel Lilla Roberts / Expedia.com
This elegant Helsinki hotel is set in a historic building located in the city’s design district, between the CBD and a prestigious residential area. Built in 1909 as a power plant, the building was also used as a police station before being transformed into a 130-room boutique hotel in 2012. The interior is inspired by the building’s rich history, and evokes the charm of a bygone era: think Art Deco style tiles, a cosy fireplace surrounded by mid-century design classics, and lush palms. Book a table at the hotel’s restaurant Krog Roba, which serves up casual Nordic fare such as shrimp toast and roe on grilled sourdough bread, and fried pike-perch with potato purée, kohlrabi, fennel and dark dill gravy. 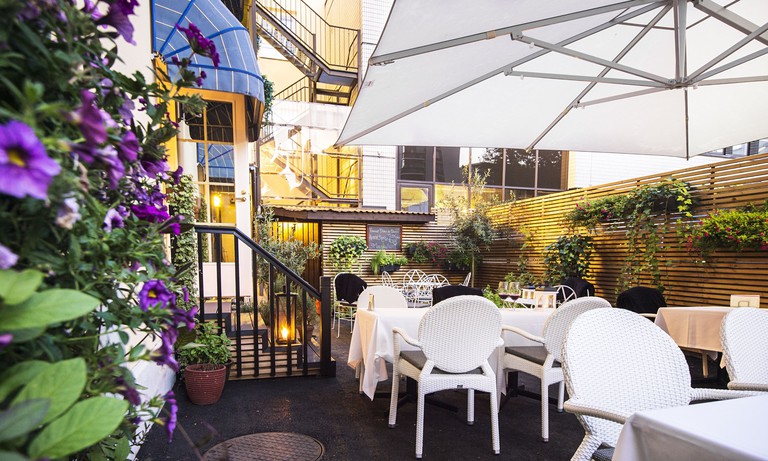 Courtesy of Boutique Hotel Yöpuu / Expedia.com
Located in a historic stone house in the centre of Jyväskylä – a city in the western Finnish Lakeland known for its high number of buildings by legendary architect Alvar Aalto – this boutique hotel has 26 uniquely decorated rooms. There’s a room inspired by 1950s Finnish films, another adorned with prints and fabric from iconic Finnish design house Marimekko. Then there’s the stylish relaxation room decorated with a palette of natural materials and a yoga mat. Fittingly for the location, there’s even a room that celebrates the spirit of Alvar Aalto, furnished with classic pieces of furniture designed by the architect. 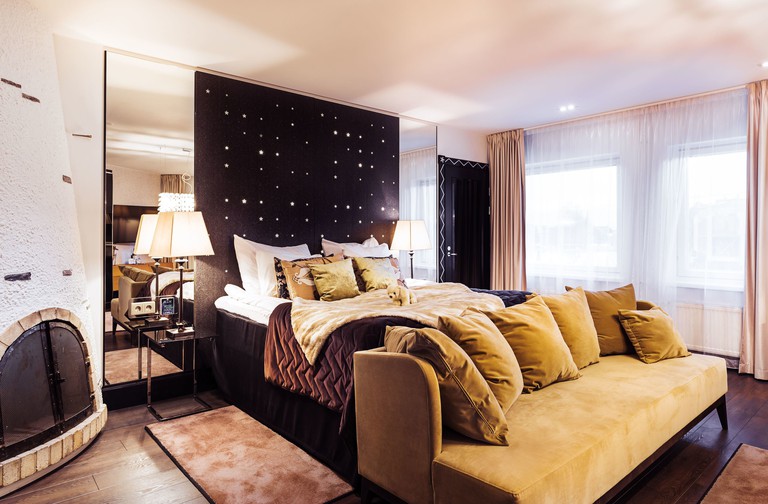 Courtesy of Arctic Light Hotel / Expedia.com
Rovaniemi, the capital of Lapland in northern Finland, is known as the official home of Santa Claus – making it a popular winter destination for families. As well as meeting Santa and his elves at Santa Claus Village, you can enjoy sleigh rides led by reindeer, ride snowmobiles and dogsleds through snowy forests and catch a glimpse of the northern lights. The Arctic Light Hotel is ideally situated to enjoy all these activities. Set in a 1950s building that was formerly the City Hall, the hotel has 57 rooms decorated with starry walls and cosy faux-fur throws. 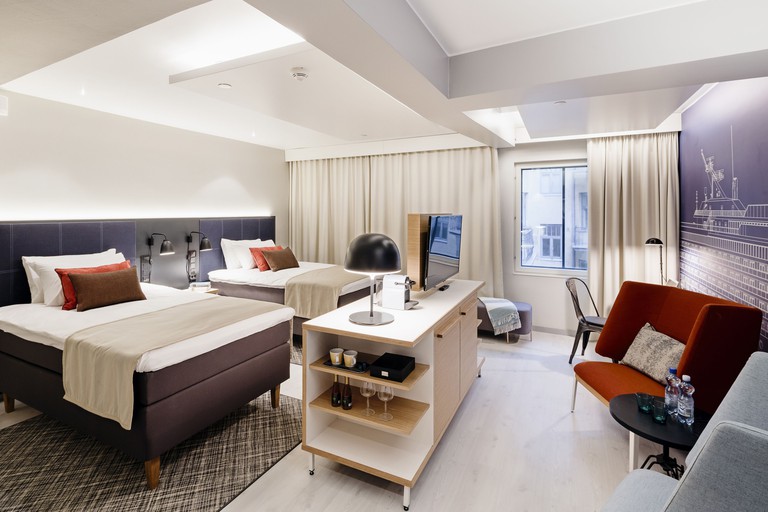 Courtesy of Hotel Indigo Helsinki - Boulevard / Expedia.com
Get an insider’s perspective on Helsinki at Hotel Indigo, a boutique hotel that celebrates local stories. Set on Bulevardi, one of Helsinki’s most important and dynamic streets in the heart of the Design District, it has 120 individually decorated rooms. Each one features murals showing the city’s different neighbourhoods by celebrated illustrators Linda Linko and Pietari Posti in addition to photographs from the nearby shipyard. The fitness centre is also rather unusual, with a Jungle Sports sling training system and silk yoga trapeze hammock. After your workout, take five in one of the traditional Finnish saunas. 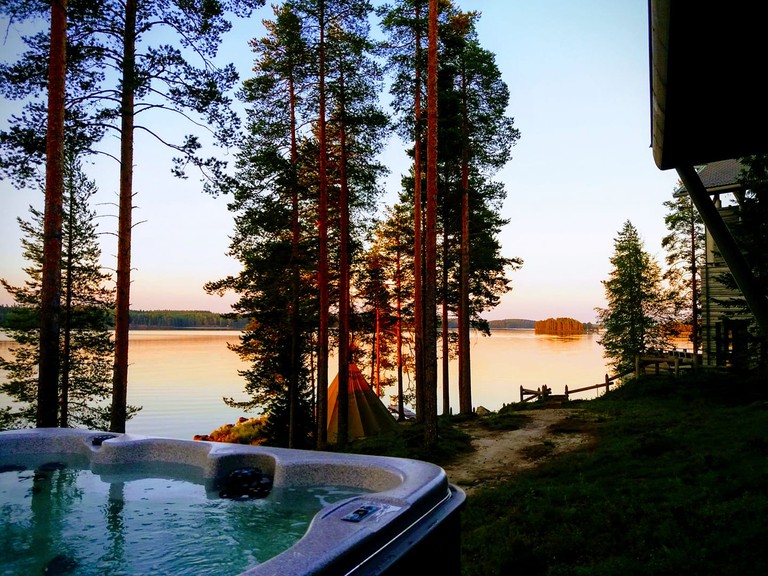 Courtesy of Hotel Kalevala / Expedia.com
Discover the wild side of Finland in Wild Taiga – an unspoilt region on Finland’s eastern border around Kainuu, Kuhmo and Suomussalmi – where encounters with bears, wolves, and wolverines are all on the cards. Amid the forests and pristine lakes is Hotel Kalevala, a small, lakeside hotel that is protected by The Finnish National Board of Antiquities. The complex has been designed to resemble an ancient wooden fortress, while the unique concrete form of the main building is inspired by the silhouette of an eagle spreading its wings. Looking for an adventure? The hotel can organise guided tours for everything from husky safaris to swimming in rapids. 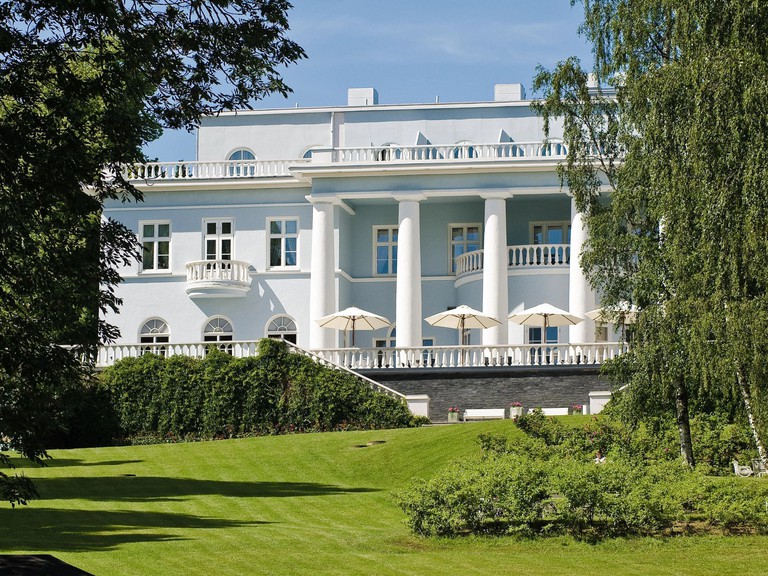 Courtesy of Hotel Haikko Manor Spa Hotel / Expedia.com
Escape the city and head to the picturesque town of Porvoo, just a half-hour drive from Helsinki. The Hotel Haikko Manor is set in a historic manor house in the middle of a seaside park and is ideal for couples in search of a romantic wellness break. There are four pools in the manor itself, including the main pool with a bubble bench heated to 30C and a cold plunge pool, not to mention a variety of saunas including a steam bath, infrared sauna and aromatherapy sauna. Looking to organise an event with a twist? There are four private seaside saunas with lounges and fireplaces here, suitable for up to 30 guests. 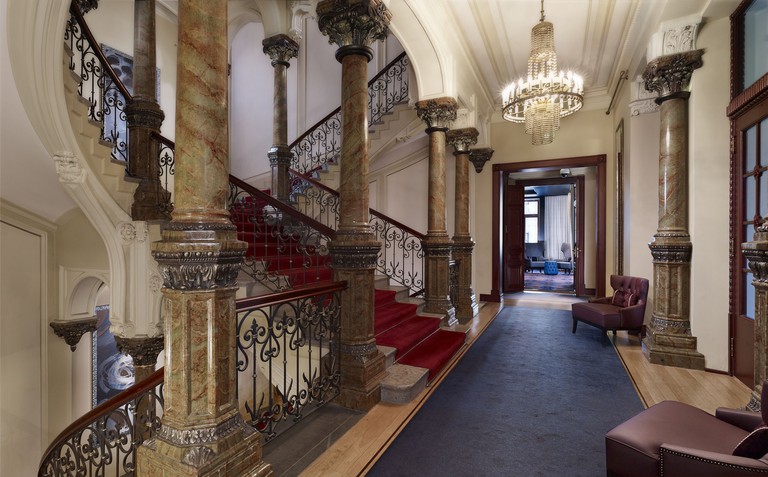 Courtesy of Hotel Kämp / Expedia.com
Hotel Kämp has been a Helsinki icon for more than 130 years, with this rich heritage celebrated throughout the hotel today. The elegant rooms feature timeless decor with plush furnishings and luxurious marble bathrooms, while the Mannerheim Suite offers separate living and bedroom areas and a private balcony overlooking the Esplanade park. The French-inspired Brasserie Kämp dates back to the early days of the hotel and the menu features specialities from previous chefs that celebrate local ingredients. Expect langoustine soup with fried langoustine and rouille sauce, or beetroot risotto with hazelnuts, king oyster mushrooms and sorrel. 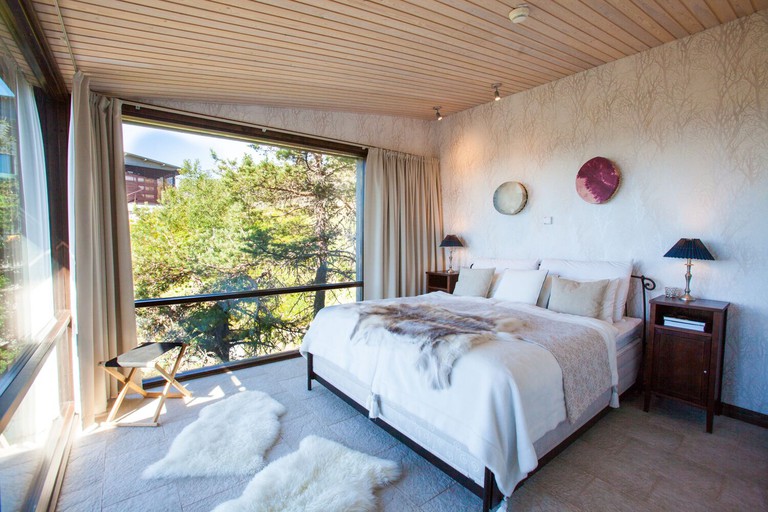 Courtesy of Ruka Peak / Expedia.com
The town of Kuusamo and the surrounding region of Lapland is home to some of Finland’s most spectacular natural wonders, from Hossa National Park to the Stone Age Varikallo cave paintings. You’ll also find Rukatunturi here, a 490m (1,607ft)-high fell and resort with downhill skiing, more than 500km (311mi) of cross-country skiing tracks and 600km (373mi) of snowmobile routes. Perched atop Ruka Fell is Ruka Peak, a family-run, ski-in and ski-out boutique hotel with six double rooms and two suites. The hotel has enormous windows that overlook the surrounding mountains and, if you’re lucky, you might catch a glimpse of the northern lights. 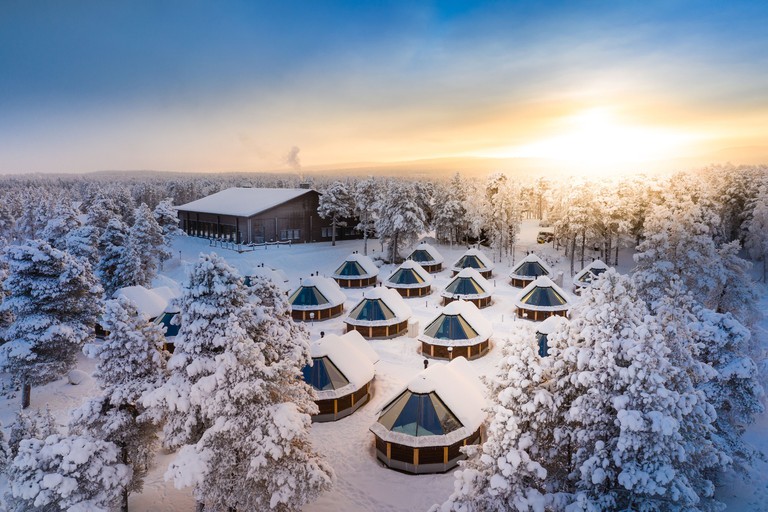 Courtesy of Wilderness Hotel Inari / Expedia.com
A perfect choice for those hoping to catch a glimpse of the aurora borealis, experience the traditional culture of Lapland at the Wilderness Hotel Inari, a modern boutique hotel on the shores of Lake Inari. The light-filled restaurant, which overlooks the lake and is hung with sculptural reindeer antler chandeliers, serves local dishes like reindeer tenderloin with smoked parsnip puree and roasted root vegetables and cold-smoked char, elk pastrami and smoked reindeer mousse served with dill mayonnaise and pickled vegetables. The hotel is also just 3km (1.8mi) from the village of Inari, which is home to the Sámi Museum in Siida and the Sámi Cultural Centre Sajos. 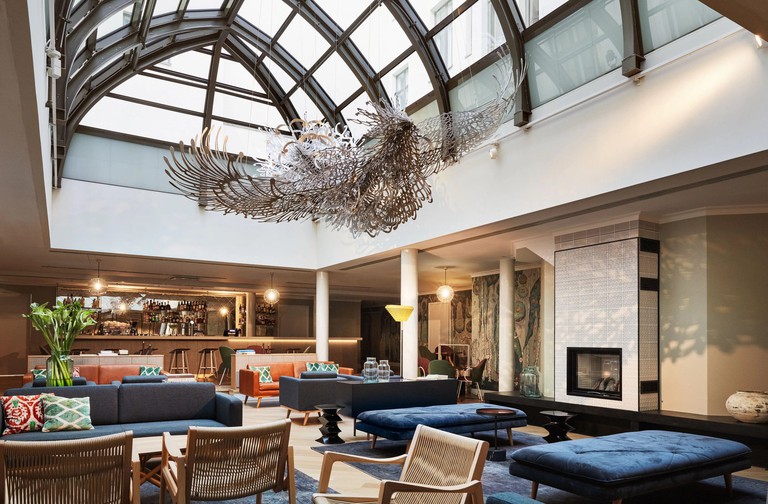 Courtesy of Hotel St George Helsinki / Expedia.com
In a historic building designed by architect Onni Tarjanne next to the Old Church Park in Helsinki, this boutique hotel is characterised by its art collection and thoughtful design. There are 148 rooms and five suites, each of which tells a different story. The Poetry Suite references the building’s former use by the Finnish Literature Society, with a curated poetry library and vintage furnishings. Then there’s the Coupole Suite, which features a living room set in the cupola of the building and is furnished with Scandinavian design icons and lithographs from Finnish abstract art pioneers.

Looking for more great hotels in Finland? Get closer to the country’s natural splendour with our guide to the best places to camp in Finland. Or catch a glimpse of the aurora borealis from the comfort of these magical stays in the Arctic Circle and book your stay with Culture Trip.

This is a rewrite of an article originally by Jessica Wood.