9 Emerging Fashion Designers You Should Know From Finland 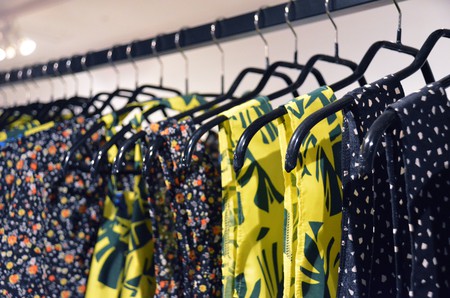 Finland has long been known for unique design, from the international popularity of the Marimekko brand to the traditional woolen clothing still sold at tourist gift shops. These are some of the rising stars of the Finnish fashion world, their inspirations, and the impact they are making on global fashion and design.

A graduate of the Aalto University School of Arts, Design, and Architecture, a prestigious school where many designers on this list have trained, Sälekari has already become an established fashion designer at the age of 23 for her bold colors and contrasting patterns. She has been featured in numerous magazines, including Elle and her competition entries include the Festival International de Mode et de Photographie in France and the H&M Design Award 2014. She currently works in Helsinki as a freelance designer.

Helsinki-based Satu Maaranen’s graduation collection won the Grand Prix at the Festival International de Mode et de Photographie in 2013 and her work has since been featured in Marie Claire, Harper’s Bazaar, Elle, and Vogue, among others. Additionally, she has done work for Marimekko, Prada, and Dolce & Gabbana and continues to work for multiple international clientele.

Since graduating from the Aalto School of Fashion in 2011, Järnefelt has gone on to create designs for Marimekko and become a guest lecturer for Aalto and several other universities. She was one of the co-founders of the Pre-Helsinki festival, which has been running since 2013 and serves as Helsinki’s Fashion Week and a networking opportunity for new fashion designers.

A French-Finnish textile artist, Salo graduated from the École Nationale Supérieur des Arts Décoratifs in Paris and recently graduated with an M.A. in textiles from Aalto University. Her master’s degree thesis was included in the Pre Helsinki festival in 2016.

Boucht is a Finnish designer who has a B.A. in Fine Arts from The Swedish School of Textiles and now works in Stockholm as a design assistant for H&M. She still works on her own designs as well, one of which was worn by Rhianna during Paris Fashion Week, which launched her career in fashion. Her graduation collection was presented at Mercedez Benz Fashion Week Stockholm and London Fashion Week and her work has been featured in Vogue, Elle US, the Daily Mail, and many more publications.

Helsinki, 16th of may, save the date! #ellaboucht Photo by Ellen Syrjälä

Raasakka has a B.A. from Aalto University a M.A. from Central Saint Martins and now works in London. She was the winner of the Grand Prix du Jury of the 2012 Festival International de Mode et de Photographie for her menswear collection. Her unique body of work combines feminine silhouettes with masculine sportswear.

Ekroth’s career has transitioned from social work to sales to professional gambling and now to fashion design after discovering his love of sewing and making clothes. He was named Finland’s Young Designer of the Year in 2015. His M.A. collection had a unique inspiration; based upon the day that O.J. Simpson’s chase from the police gained 100 million viewers and beat out six major sporting events and caused TV signals to overheat and become mixed up. His collection mixes up different elements of the sports outfits that were worn on that day.

One of my favourite persons from Hyères rockin my black shine cape! Coming soon to Lafayette near you. #rolfekrothxgl #rolfekrothxgalerieslafayette #rolfekroth #hyeres2017 #hyeres32

Sirén is another graduate of both Aalto University and Central Saint Martins who now designs menswear. Her M.A. collection was based upon old photos of her father as a DJ and was influenced by 1970s Finnish nostalgia and West Berlin. Her collection won the Hyères Fashion Festival Grand Prize in 2012.

Suurväli is a highly experimental designer, using methods such as liquid rubber to create a shiny surface and wrinkled fabric to recreate clothes dropped on the floor. Her recent inspirations include the migrant crisis and issues of decreased privacy.