The Cosiest Festival in the World: Nordic Knitting in the Faroes 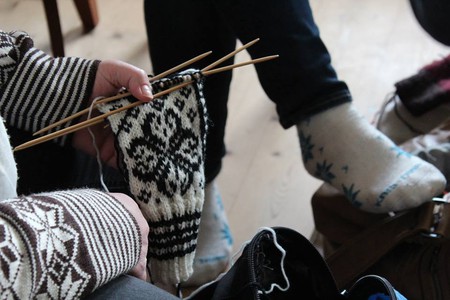 Every April, women from all over the world gather in the tiny village of Fuglafjørður to immerse themselves in the world of knitting. This truly unique festival in the Faroe Islands is programmed as living room workshops, providing fascinating lectures on the limitless creative potential of craftwork in the cosiest environment possible.

The Faroe Islands first welcomed its knitting festival in 2015, with hundreds of people flocking to learn about knitting and revel in each other’s company. In this interview, we talk to Sólgerd Maria Joensen, one of the festival organisers, to find out why this knitting festival is the cosiest in the world. This year, there was a particular focus placed on upcycling in an attempt to help combat climate change.

A truly unique festival with a personal touch

This cosy festival offers living room workshops and an eclectic program of fascinating lectures that take place in people’s homes. The personal feel of the festival, as well as the friendly nature of the Fuglafjørður community, has ensured its increasing popularity, with live music and private accommodation on the cards too.

Each year, there are roughly 70 knitting workshops taught at the hands of more than 20 world experts. In previous years, there have been huge banquets hosted by the whole village of Fuglafjørður, where invitees attended in their finest knitted attire. The idea of binding stitches, while also binding communities, is their ultimate manifesto.

A unique glimpse into Faroese culture

This knitting festival offers an exclusive opportunity to stay with locals, with a glimpse into their lives like never before. There are not many hotels in the remote Faroe Islands and so, the option of staying with locals ensures tourists can make their wildest knitting dreams come true.

“It’s a rare opportunity to make new friends by spending your time in the homes of the locals of Fuglafjørður”, Sólgerd tells Culture Trip. “People are always curious as to how people are living in the Faroes and now, you can discover it all by being taught how to knit in our homes”. 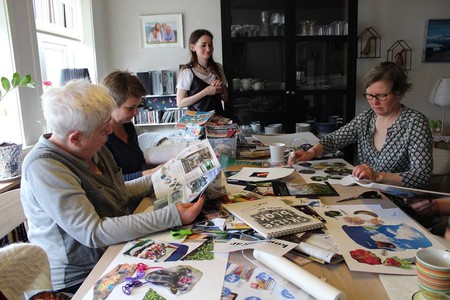 This is where the cosiness comes into play: when you’re sitting and talking together, enjoying a relaxing moment of peace with new friends after being welcomed into their homes. “Denmark sells this idea of cosiness with ‘hygge’ and the Faroe Islands have the same”, says Sólgerd.

While not all the hosts are fluent in English, you’re sure to be greeted with a hospitable welcome over a cup of coffee and will soon be revelling in a mutual love for crafts. “It’s a really relaxed atmosphere, there’s absolutely no stress”, Sólgerd insists. 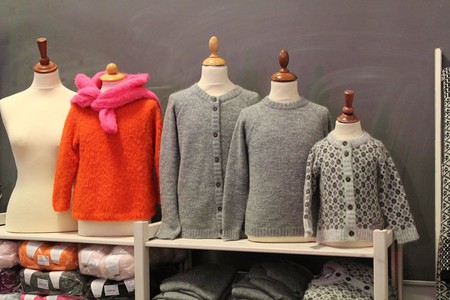 The traditions of knitting in the Faroe Islands

Interestingly, it was the men who knitted in ancient Faroese culture. The gender roles were reversed only a few centuries back when the country became a fishing culture, largely undertaken by men, leaving women the task of knitting while the men were at sea.

Faroese women excelled at this task, developing ingenious techniques of time efficiency like having two women knitting a sweater at once. The women also used to carry a special backpack made of wood, held in place by a strip around the head, so that they could knit on the move. Their talent has never been so clear as in the giant mitten on show at the festival, the biggest in the world.

Trudging across mountainous landscapes and hopping across streams to collect milk, all the while knitting a much-needed sweater, makes the ancient women of the Faroe Islands seem like the heroes of the nation. 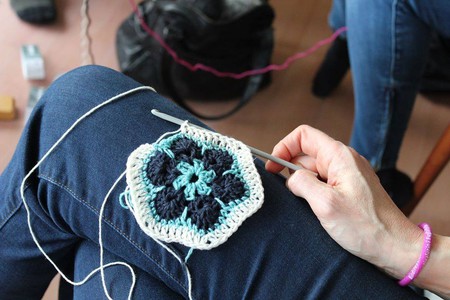 “If you didn’t have money to buy clothes, then you simply had to make them”, says Sólgerd Joensen. “With the islands being so isolated, it took a long time to get imports, which meant you had to knit your clothes so you wouldn’t freeze”.

“We want to hold on to the tradition of knitting. It’s maybe starting to decline a little because schools have low budgets. They need to save money and craftwork gets taken out of the curriculum instead of reading and writing, which is very sad. Not everyone is born to be a banker, for example, many are good with crafts”.

Knitting inspires a sense of community

When the organisers first started the festival, they wanted to put the focus on the old culture of knitting in the Faroe Islands. But they also wanted to provide a safe space for women – and only women – to enjoy this ancient pleasure in a social environment. It draws inspiration from how the country is very fond of its social knitting clubs and Sólgerd is a member of two knitting clubs herself. 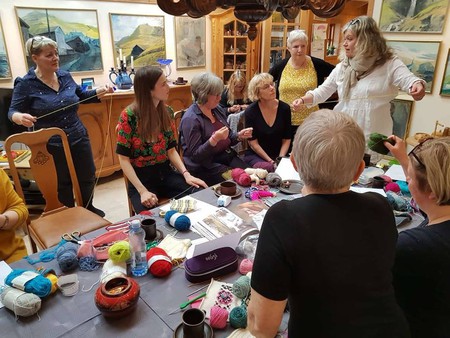 “It’s an old tradition and it’s mostly social these days but in the old days, it was normal to always have knitting material with you.Also, with the festival, we wanted to let women concentrate on themselves and have some ‘me time’ – essentially, not be bothered by kids and husbands”.

The festival places focus on upcycling

The festival staged many events this year that placed a focus on upcycling, for example, recycling leftover yarn by grooming it up and mixing it with new wool.

“It was a coincidence but we found more and more people addressing these issues and so this year, there’s been an upcycling theme. We’ve had lots of lectures about reusing and mending clothes and how to transform them into something prettier”. 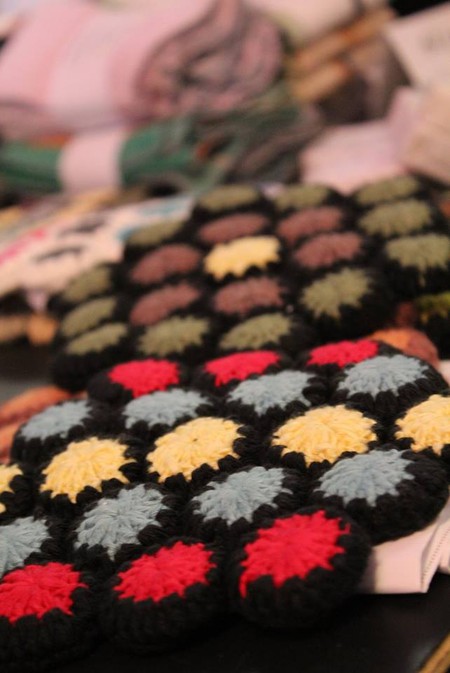 “We teach people how to update clothes so they don’t get bored. There’s one workshop where you’re taught how to transform a drawing into embroidery. Another is focused on transforming cuffs into something more special, an event that even sold out”.

A program motivated by climate change

One festival guest, Fia Heinesen, gave a lecture about the overproduction of clothes for the fashion industry. After living in Denmark for 12 years, Fia soon became appalled at the shocking statistics of waste, as Denmark has one of the highest averages of consumers throwing clothes away.

There are 16 kilos of clothes thrown away per person each year and so, putting her artistic talent to good use, she made a cape weighing 16 kilos from various items of clothing to raise awareness. 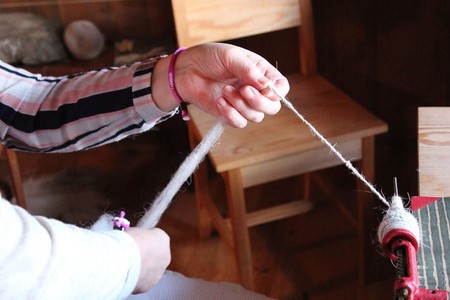 The cape was also made to draw attention to how only one percent of clothes donated to Red Cross go to people who need them, the rest being sent back to the textile industry. “It should be the other way around with more going to people who really need them”, says Sólgerd. 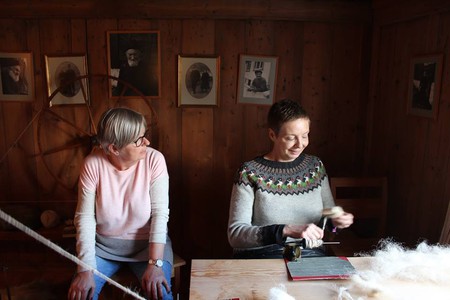 One of the fashion alternatives the festival is pushing for to avoid this waste is to make your own clothes. Sólgerd says not only is this better for the environment, but it’s actually a better way to express yourself as it’s ‘more personal’. She points out that Anne-Marie Nielsen staged a fascinating workshop on aesthetic knitting techniques, which was particularly popular in this regard.

But not all the events are about knitting, there is drama on offer as well as live music. Hafdís Bjarnadóttir from Iceland, for example, put on an incredible musical performance showcasing her unique talent of composing music from knitting patterns. 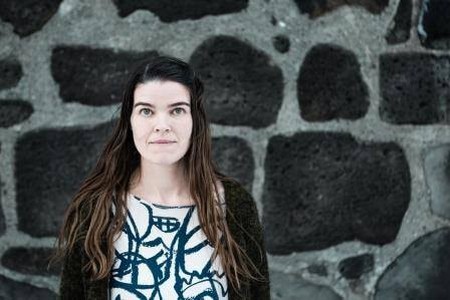 If you’re travelling to the Faroe Islands for the first time, especially to soak up the relaxed vibes of this spectacular knitting festival, then we highly recommend booking a stay in the adorable Gjáargarður Guesthouse. It’s nestled on the shores of Gjógv, named after the 200-metre long sea-filled gorge that flows from the village into the ocean. It’s also the most charming hotel on the island.

Tucked away behind the grandest mountain in the Faroe Islands, Slættaratindur, this quaintly grass-topped guesthouse commands a breathtaking view across the scenic 400-year-old village of Gjógv. It’s the ideal base if you plan on hiking or fishing and its calm and peaceful surroundings – with barely another soul in sight – promise to provide an authentic and relaxed stay. There’s nowhere more idyllic.