The Top 15 Things to See and Do on Saaremaa Island 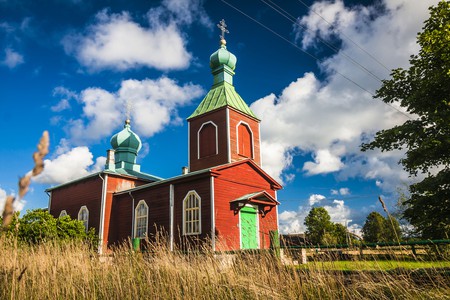 As the largest of Estonia‘s islands, Saaremaa’s natural beauty and interesting history attract both local and international visitors. Because of its relative isolation, Saaremaa is seen as “authentic” Estonia, and emits a fisherman’s village vibe combined with a national park, making it a perfect retreat for relaxation and nature explorations. Read on to discover our favorite sights to see on beautiful Saaremaa Island.

The capital of Saaremaa — Kuressaare — holds some of Saaremaa’s top sights. It is also here that you’ll find excellent restaurants and cafés for dining out, as well as a variety of hotels and accommodations. Kuressaare also has a small airport, so if you are arriving by air, this is where you’ll begin your adventure. Though Kuressaare has seen numerous wars and invasions, which damaged or ruined many of the oldest buildings, some impressive historical sites remain for visitors to discover. For example, the impressive Kuressaare Castle stands strong, the town hall, which was originally built in 1654 has been restored, and St. Nicolas Church still reaches for the sky.

The main feature of Kuressaare is the Kuressaare Castle, which dates back to the 1200s and was probably built by the Teutonic Order as a residence for the Bishop of Saare-Laane. Several other additions were made later in the castle’s history by other owners — Danish, Swedish, and Russian. Kuressaare Castle is unique among castles in the Baltics, because it is the only completely intact medieval fortress that remains. The two towers as the defensive fortifications have also mostly survived and/or have been restored. 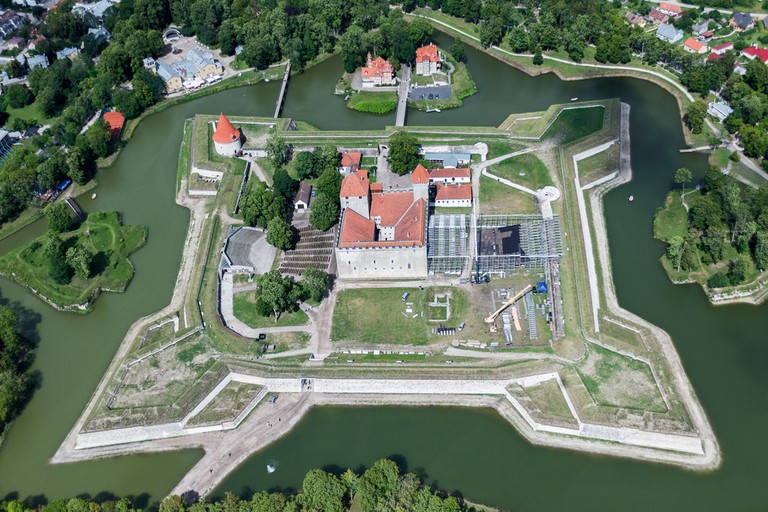 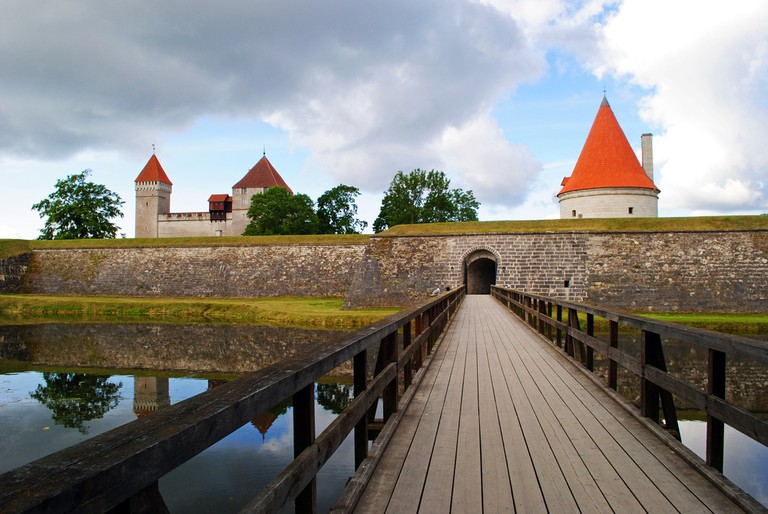 Kuressaare Castle | © irra_irra/Shutterstock
Located within the Kuressaare Castle, Saaremaa Museum houses exhibits related to Saaremaa, as well as restored interiors providing examples of religious areas, defensive quarters, and dungeons. The Saaremaa Museum was founded in 1865 and is one of the largest museums in all of Estonia — certainly making it worthy of a visit!
Open In Google Maps
1 Lossihoov, Kuressaare, Saare maakond, 93815, Estonia
+3724554463
Visit Website
Give us feedback 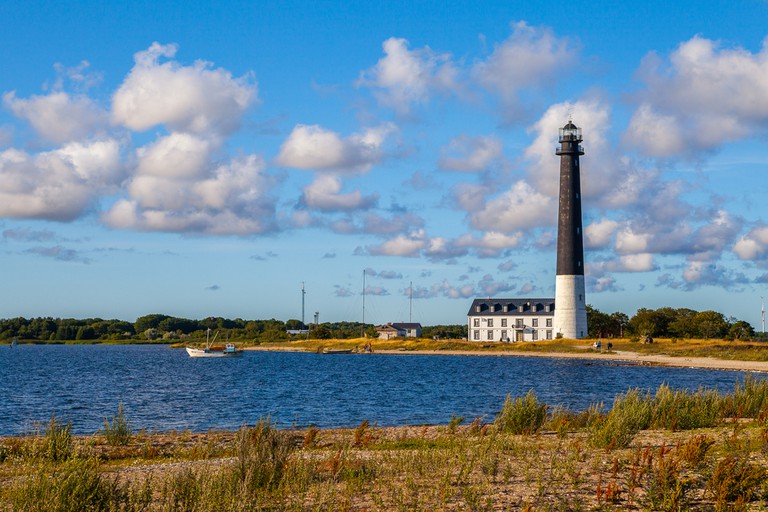 Café Retro is a cute, kitschy, and highly rated spot for a meal or drink in Kuressaare. The menu features roasted quail with beetroot risotto, creamy chicken and mushroom soup, and perfectly moist cakes. Both the interior and exterior of Café Retro is perfect for Instagram photos because of its incorporation of bright colors, chalkboard paint, and nostalgic accessories.

Located in Angla, Angla Windmill Hill holds the only remaining windmills on Saaremaa Island, although windmills used to be a common sight on the island. These windmills were formerly used to grind wheat and rye into flour. Five wooden windmills remain on the hill and visitors will see both Saaremaa-style and Dutch-style windmills. 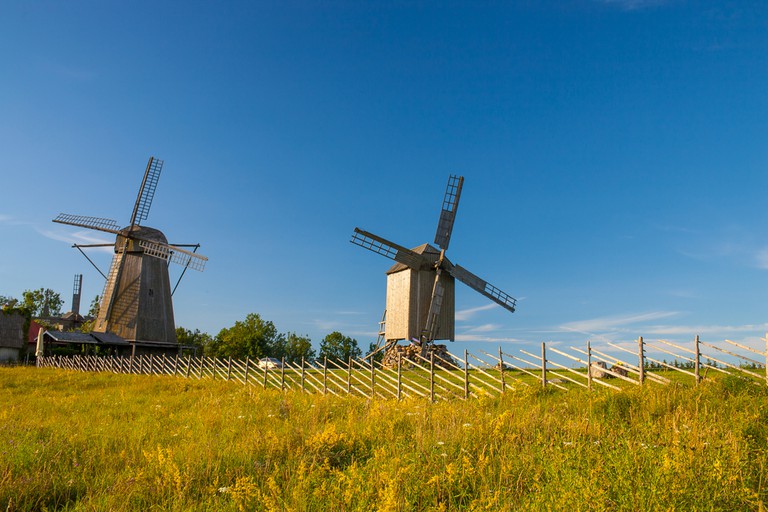 The Kaali Meteorite Crater Field is a site of myth and legend on Saaremaa, as it is the most recent example of a large crater falling in a populated area. Approximately 7,500 to 7,600 years ago, a large meteorite entered the Earth’s atmosphere and broke into numerous smaller meteorites. The largest meteorite left a crater 110 meters in diameter and 22 meters deep.

Kuressaare’s St. Nicholas Church was built out of locally excavated dolomite in 1790. It features three naves and a three-part gate. The church was built on the orders of Catherine the Great.

Orthodox Church of the Holy Trinity in Ooriku

Built in 1873, the Orthodox Church of the Holy Trinity, simply known as Ooriku Church, is a five-domed church built in the shape of a Greek cross. Later, a three-story clock tower was added to the original building. 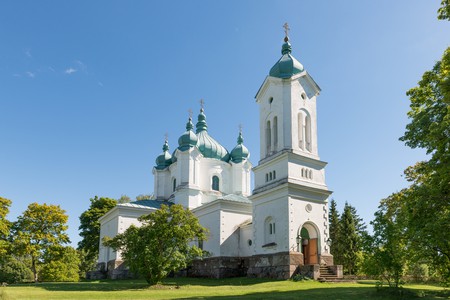 Visitors seeking a day trip either on their way to or from Saaremaa Island might consider stopping at Muhu Island, which is Estonia’s third largest island. A day trip to Muhu might include a visit to Muhu St. Catherine’s Church, checking out the colorful clothing and textiles for which Muhu is known, and a meal enjoyed at Padaste Manor, Estonia’s number one restaurant.

So many manors in Estonia 🏡🇪🇪 #muhu #visitestonia #pädaste #saaremaa

Panga Cliff is located on the northern shore of Saaremaa Island. The cliffs that reach 21.3 meters high and are 2.5 km long create a sheer wall around Saaremaa’s northern shore. From the top, visitors can marvel at views of the water or watch the sunset. Additionally, these cliffs were formerly a sacrificial site.

Park
Facebook
Email
Twitter
Pinterest
Copy link
Share
Map View
Vilsandi National Park is composed of 150 small islands in the Baltic Sea, and most of its area protects marine ecosystems. Vilsandi National Park is a great place for birdwatching, spotting seals, and botanizing. Portions of Saaremaa’s coast are part of Vilsandi National Park, so visitors will find hiking trails and boats to travel to other islands composing the park.
Open In Google Maps
Saare County, Estonia
Visit Website
Give us feedback

Spa treatments and saunas are a big part of Estonian culture, and visitors can opt to relax in a spa on Saaremaa Island. Some of the top spas on Saaremaa are Georg Ots Spa Hotel and Grand Rose Spa Hotel.

Visitors who enjoy cycling will be happy to learn that there are 20 km of biking trails in and around Kuressaare and further biking routes along roads. Because there is little traffic on Saaremaa, cyclists can enjoy mostly free roads, although some are unpaved.

Ornithologists, photographers, and birdwatchers will find a birding haven on Saaremaa each spring and fall when birds can be seen nesting or passing through Saaremaa on their way to warmer wintering grounds. Vilsandi National Park is one of the main places to see migrating and nesting birds, especially waterbirds. In fact, 1.5 million migrating birds have been counted here in the autumn. Black storks, broad-billed sandpipers, pygmy owls, and more can be observed in Estonia.