This Royal Parade in Copenhagen is a Ceremony Not to Miss 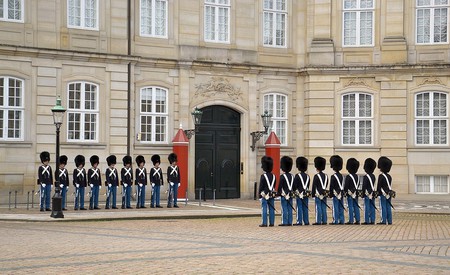 Every day at 11.30 pm the Royal Guard parade in the streets of Copenhagen’s city center before arriving at the royal family’s winter residence in Amalienborg Palace, where the ceremony for the changing of the guards takes place.

The Changing of the Guard ceremony

Guards with bearskin hats and blue ceremonial uniforms parade every day through the historic city center before they go on duty in one of Denmark’s most majestic palaces, leaving tourists and locals open-mouthed. 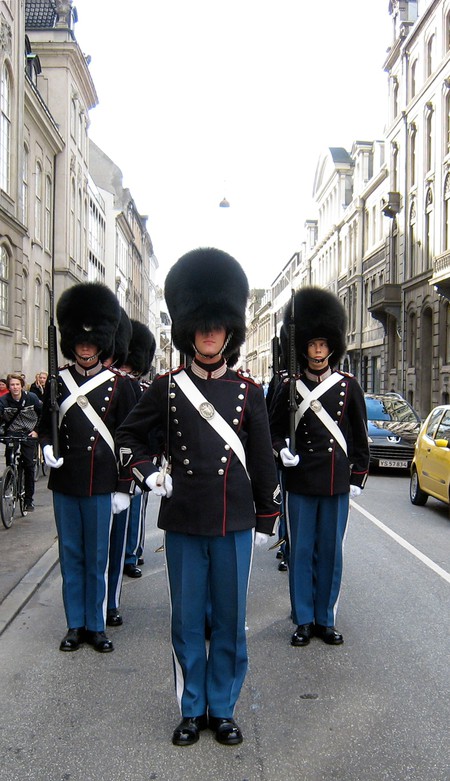 At 11.30 the Danish Royal Guard start marching from the Life Guard Barracks in Rosenborg Castle and at 12.00 sharp it reaches Amalienborg Palace, which is the royal family’s winter residence. There they change last day’s Royal Guard and take their positions in front of the palace’s four buildings, starting their 24-hour shift.

When the Queen is in residence, the ceremony becomes even more spectacular as the 60-guard King Watch is on duty and the royal parade is accompanied by the Royal Guards music band, which consists of 36 musicians and 16 drummers. When Prince Henrik was in the palace or when Crown Prince Frederik or Prince Joachim are in residence, the Lieutenant Watch (Løjtnantsvagt) is on shift and music is again heard during the ceremony but with fewer guards (51-54). However, when the royal family isn’t at their winter residence, the Manor Watch (Palævagt), which consists of only 18 guards, protects the palace. 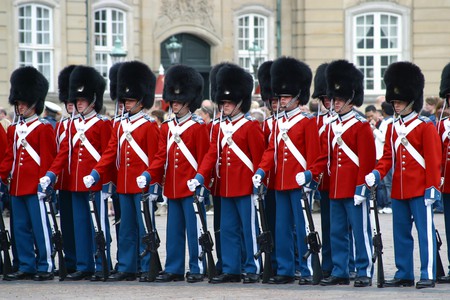 The best spot for tourists to watch the ceremony is at Amalienborg Palace, where guards march from the courtyard’s one corner to the other and the flag lieutenant hands the national flag to the adjutant on duty. However, it’s equally impressive and maybe a bit more fun to see the parade of Royal Guards pass by out of the blue while you’re standing close to the Round Tower or on your way to Kongens Nytorv.

The story of the Royal Life Guard

Den Kongelige Livgarde was founded by King Frederik III in 1658. Not really trusting in the longevity of the Roskilde peace treaty between Denmark and Sweden, the King deemed the creation of a royal guard necessary. Nowadays, the Royal Guard has more than one role. It serves as an active infantry unit, that assigns soldiers to combat zones around the globe, as well as the royal family’s guard, with its members being on duty at Denmark’s biggest castles such as Amalienborg Palace, Rosenborg Castle, Kastellet and the Fredensborg Palace. 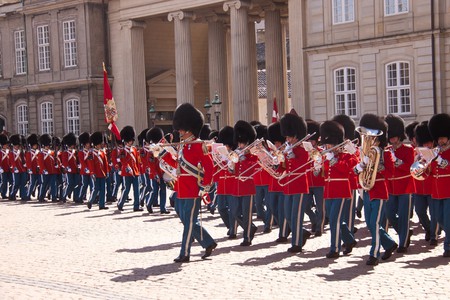 In the past, vacancies on the Royal Guard were filled through standard military draft but nowadays there are many Danes that voluntarily join Den Kongelige Livgarde. After three months of military training and one month of parade other four months. The Royal Guard’s motto is Pro Rege Et Grege, which translates to ‘For King and People’.

Those who are fascinated by the Royal Guard’s 300-year history should definitely visit The Royal Life Guards Museum in Rosenborg Castle, where a great collection of weapons, uniforms, instruments and other items of the Royal Guard are displayed for visitors.