The Best Bridges in Copenhagen

Øresund Bridge | © Daniel 4021 / Good Free Photos
A bridge that transforms into an underwater tunnel, another one that looks like a sailing ship and one known as the “Bicycle Snake” are just some of the bridges you’ll discover in this article. If you’re renting a bike during your stay in Copenhagen, pay special attention because this guide includes some of the best cycling bridges all over the city.

The award-winning engineering miracle that is Øresundsbroen could not but occupy the very top of this list. Designed by architect George K.S. Rotne and completed on the turn of the millennium, the bridge connects Denmark’s capital to the Swedish town of Malmö via both motorway and railway that run across Oresund strait. What makes the structure truly remarkable, however, is that it begins as a tunnel in Copenhagen, which, approximately 8km (5 miles) off the Danish coast, reaches a small artificial island where it transitions into a bridge, continuing all the way to Sweden. The journey between the neighboring countries takes about 40 minutes. 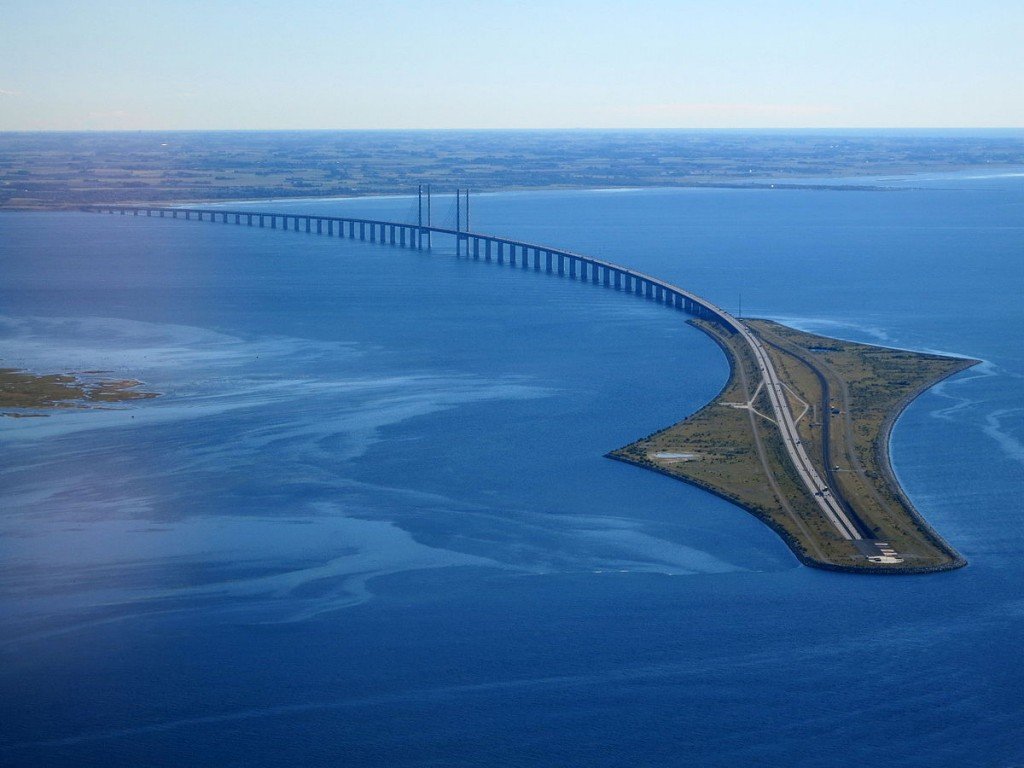 The 32-meter-long Circle Bridge was designed by the renowned Danish-Icelandic artist, Olafur Eliasson, also known for Your Rainbow Panorama at Aarhus museum. It links the area near Danisco with Christiansbro. What makes this bridge special is that, instead of being a straight pathway, it consists of five offset circular platforms of different sizes. Each one of them has a mast on top which was designed by Eliasson in order to make the bridge look like a sailing ship, in keeping with the history of Christianshavn which is a neighborhood strongly connected with sailing. 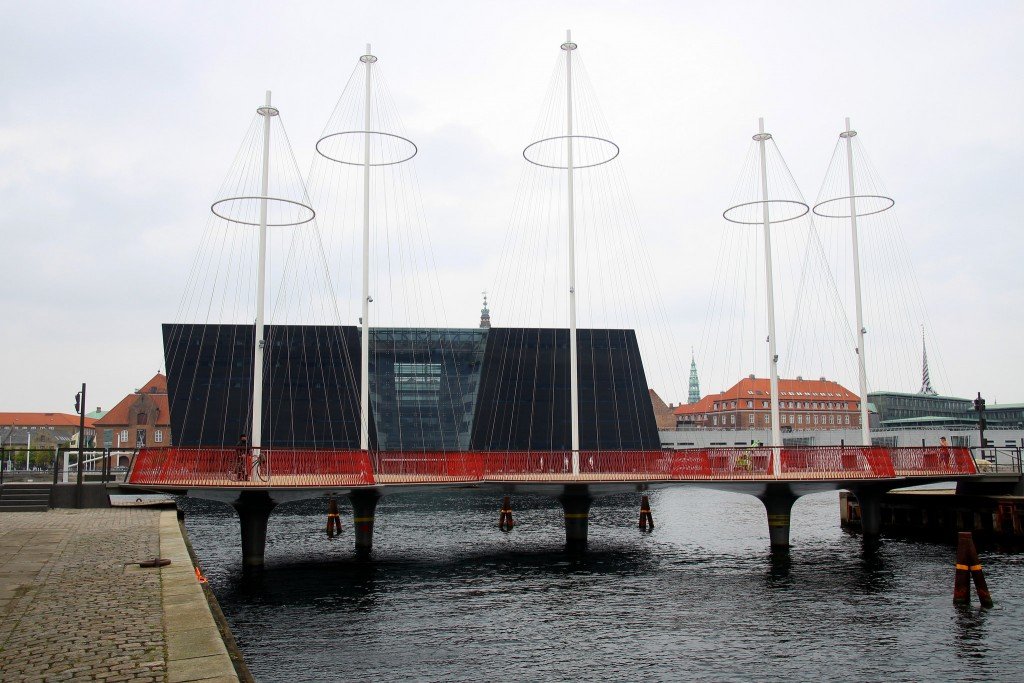 Designed by Vilhelm Dahlerup and constructed between 1885 and 1887, Queen Louise’s Bridge is considered, to this day, to be one of the architectural masterpieces of Copenhagen. It stands in the middle of two spectacular lakes, Sortedam Lake (Sortedam Sø) and Peblinge Lake (Peblinge Sø) and links Frederiksborggade in the city center with Nørrebrogade in Nørrebro. Due to its unique location and impressive width, it is one of the locals’ favorite spots during hot sunny days. The granite bridge took its name from King Christian IX’s wife, Queen Louise.
More Info
Open In Google Maps
Queen Louise Bridge, Copenhagen, 1371, Denmark

The Marble Bridge, which was designed by Nicolai Eigtved, was built at the same time as the first palace and its construction completed in 1744. The rococo style bridge, which crosses Frederiksholms Kanal, is an extension of Ny Vestergade and leads to Christiansborg Ridebane, a square surrounded by old stables. These two parts of the palace were the only ones to survive the fire of 1794. It is known as Marble Bridge because it is paved with Norwegian marble. Its beautiful design, featuring three impressive arches, and its long history makes it one of the most notable bridges Copenhagen.
More Info
Open In Google Maps
Marmorbroen, København K København, 1218, Denmark
Visit website

With the Bicycle Snake bridge (Cykelslangen in Danish) Copenhagen proves once more that it hasn’t earned the title of one of the best cities in the world for cyclists without reason. The architects behind the elegant design are Dissing+Weitling, and it’s thanks to them that, since June 2014, cyclists have no need to dismount on their way from Vesterbro to Islandsbrygge, when The Quay Bridge ends near Fisketorvet Shopping Center. This elegant bridge is 13 feet wide (4 meters) and it stretches for 623 feet (190 meters) above the harbor basin and between the blocks at Kalvebod Brygge. 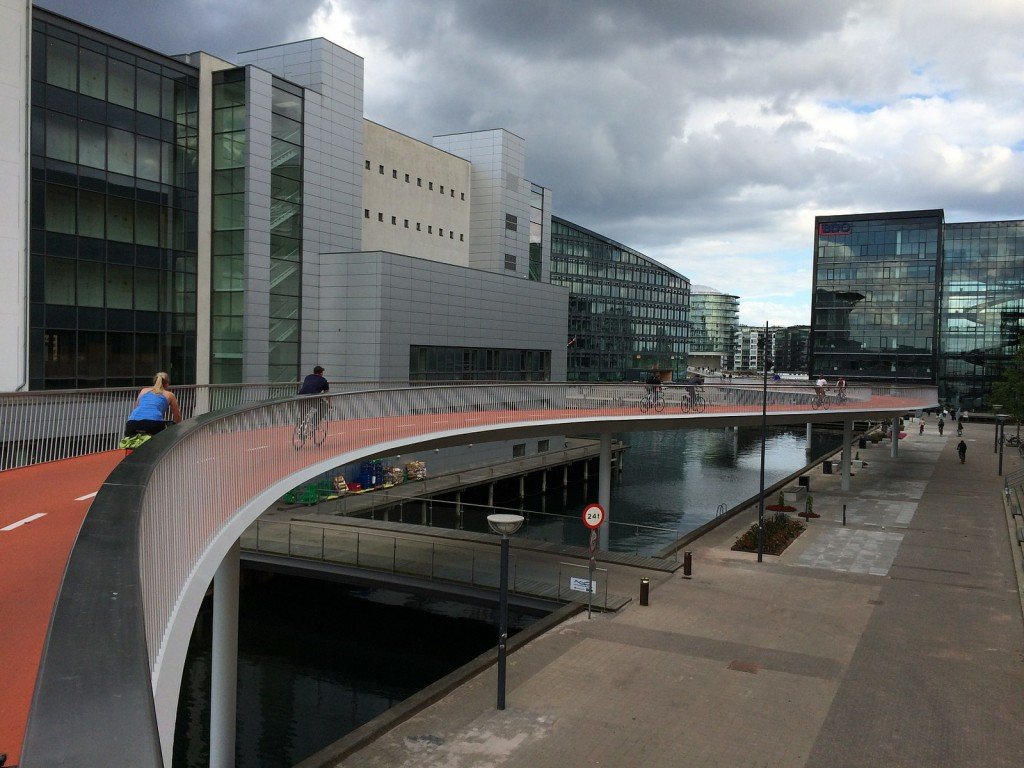 It might have three years after the expected inauguration date, but Inner Harbor Bridge finally opened in July 2016, welcoming thousands of cyclists and pedestrians. The 590 foot (180 meter) bridge, which was designed by Studio Bednarski from London, connects Nyhavn and Christianshavn/Holmen saving valuable time for students and commuters who cross the city on a daily basis. A discussion about the construction of a bridge to connect these parts of the city had started in 2004 when the Opera opened for the first time, but a series of unfortunate events delayed its construction. Copenhageners often refer to Inner Harbor Bridge as “The Kissing Bridge” due to the way it looks when it reconnects horizontally after splitting in two to allow ships to pass beneath it.
More Info
Open In Google Maps
Inderhavnsbroen, København K København, 1401, Denmark

Knippelsbro is the fifth consecutive bridge built to connect Copenhagen with Christianshavn. Its construction was completed in 1937 after three years of public works. It was originally known as Great Amager Bridge but was renamed Knippelsbro after Hans Knip, the man who was responsible for the supervision of the bridge and for the collection of tolls from passing ships in the first half of the 17th century. If you notice the bridge suddenly appearing to move, don’t panic: Knippelsbro is a bascule bridge meaning that it has two leaves that rise up to allow ships to pass beneath it.
More Info
Open In Google Maps
Knippelsbro, København K København K, 1409, Denmark