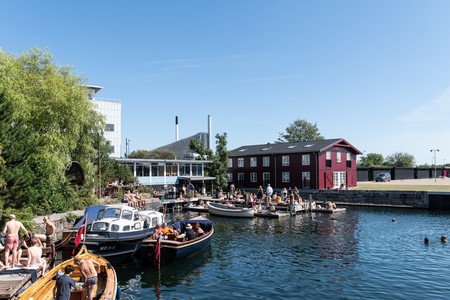 Formerly home to Copenhagen’s shipbuilding industry, Refshaleøen is now the place to be – thanks to its ramshackle spirit, a thriving street-food scene and an abundance of aquatic pursuits.

There’s nothing as uncool these days as doing something you’re meant to do in a place you were meant to do it. Which is perhaps one reason why a former shipyard in Copenhagen is proving so popular with the kids… and everyone else, too. No, shipbuilding is not the latest craft craze to capture the zeitgeist. Instead the empty warehouses, barren wastelands and picturesque harbours of Refshaleøen – an artificial island just to the east of Copenhagen – have proved a haven for Copenhagen’s dynamic cultural scene.

Back in 2014, Conchita Wurst won Eurovision, and her performance was staged on this very spot, inside a colossal disused shipping hangar; you could say Conchita’s Eurovision turn marked the start of a Refshaleøen renaissance. Since then, the island’s ramshackle landscape has been injected with life, slowly transforming into a hub for the culturally curious. 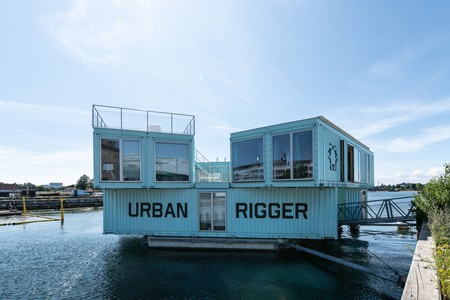 For a few years, you’d come to Refshaleøen in search of industrial cool or an unexpected ‘happening’, only to make the long journey back to central Copenhagen sooner than expected and a little disappointed. Now, the journey is not so long – thanks to a new bridge, Refshaleøen is just a 15-minute cycle from the city – and the chances are the place will keep you entertained all night, thanks to the wealth of things to see, eat and do.

The area’s metamorphosis has occurred partly due to space: Copenhagen’s ever-evolving food and party scenes needed more of it, hence the decision to host Eurovision out here. But things really changed for Refshaleøen last summer, when the sensationally popular Copenhagen Street Food festival was evicted from its compact home on Paper Island and moved up here to spread its wings. 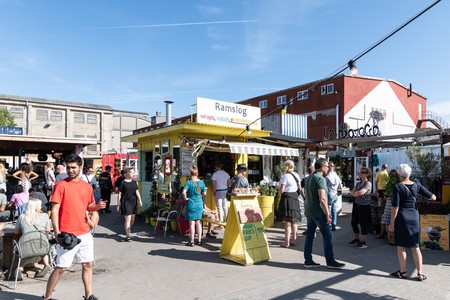 Renamed Reffen, the street-food market now gives you an excuse to come to Refshaleøen without an invite to a gallery or restaurant opening. True, there are Michelin-star eateries including Noma and Amass (the latter from former Noma head chef Matthew Orlando) up here. But quiet, upmarket restaurants are not for the everyday, and not enough to give the place a sufficient vibe for a day out.

A vibe is what Refshaleøen most certainly has now – particularly in the summer. The little inlet harbours are packed with boats, locals practising their watersports, and visitors basking in the saunas before heading into the water for a swim. There is a community of students living here in chic ‘container homes’ that overlook the water. Everywhere you turn, there’s a Mikkeller bar selling inventive craft beers. 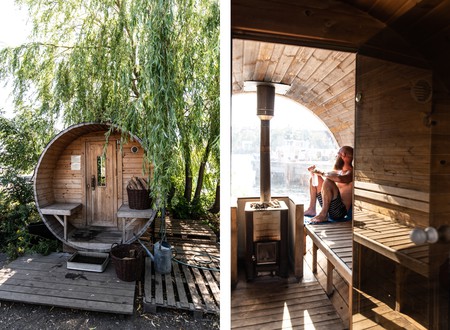 But the triumph of Refshaleøen, in its current incarnation, is that it hasn’t lost any of its raw aesthetic, grit or unrestrained sprawl. You are as likely to come across a huge warehouse selling old furniture (check out B&W Loppemarked) as you are a white-walled gallery showing avant-garde paintings or video art (Copenhagen Contemporary is well worth a visit). 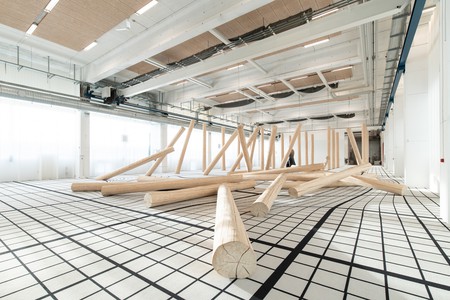 This means that Refshaleøen draws a hip millennial crowd, while also remaining accessible to everyone. The street-food market at Reffen has a lot to do with that, as does the free-for-all attitude, the sense that you might discover something unusual and the very Danish idea that if there is fun to be had, it ought to be had by people of every age – including families. 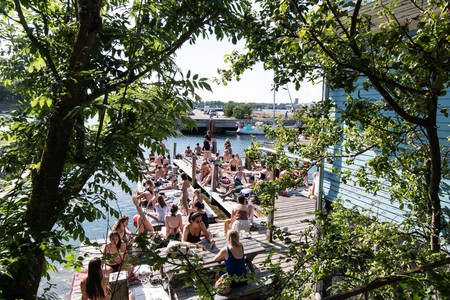 In the summer, a principal draw is water. Copenhagen’s harbour water is certified safe for swimming, which means you can dive in at one of the many harbour baths around the coast. A more secluded hangout is La Banchina, a vegetable-forward farm-to-table café and restaurant whose pontoons stretch out into a miniature cove and where swimming between before or after your meal is encouraged (their strapline is “dip, eat, repeat”), all before warming up in the sauna. CopenHot, up on the other side of Reffen, gives you the chance to soak in a hot tub on the pontoon before taking the plunge. Refshaleøen has Copenhagen’s tallest climbing wall, Blocs & Walls, a paintballing arena, and will soon have an artificial ski slope. 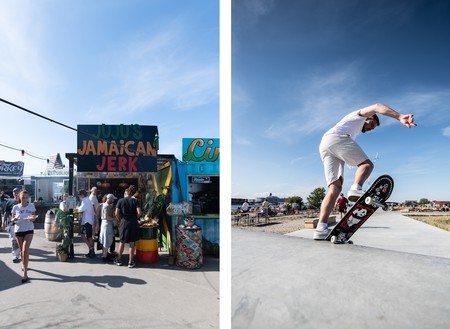 Much of the joy of Refshaleøen is in stumbling across quirky community concepts. But there are some treats you shouldn’t miss. Be sure to sample Juju’s Jamaican Jerk chicken, Filipino barbecue treats from Thrilla in Manilla, and moreish Nutella pancakes courtesy of Crêpes a la Cart – all at the Reffen street-food market. Call in on the chic Lille Bakery & Eatery, where you can eat in or take some hearty bread home with you. If it’s really hot, install yourself at Halvandet beach bar with a cocktail (and take your swimmers). To treat yourself to some exquisite food in an environment that’s as far from heavy industry as you could imagine, book yourself a table at 56° nearby, which serves Nordic food without pretence in an old barn in the middle of a field. 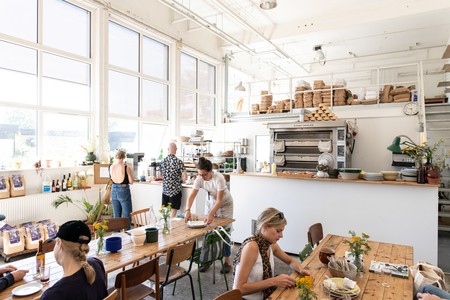 It’s also worth keeping an eye on the calendar. Every May, Copenhagen’s street party Distortion winds up here for its wild Final Night Party. In June, Copenhell, Denmark’s heavy metal festival, comes to Refshaleøen. Probably most interesting of all is Haven, a festival of music and food convened by Bryce and Aaron Dessner (of The National), the chef Claus Meyer and the beer brewer Mikkel Borg Bjergsø (he of Mikkeller fame). The festival, each August, was born in Refshaleøen and represents everything this area is about, right down to its name: Haven is Danish for harbour. 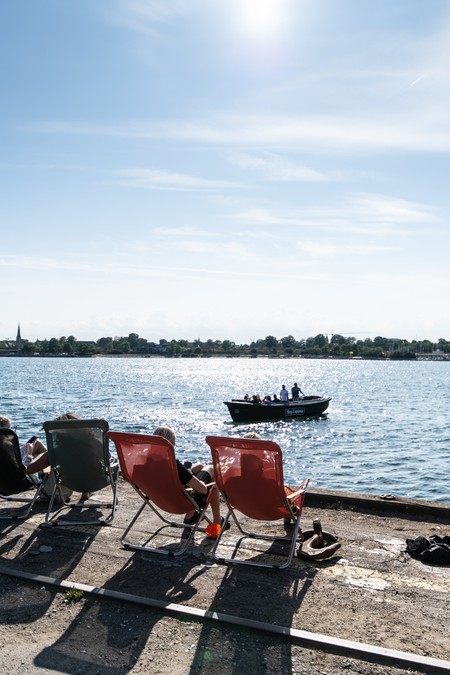 The art of doing nothing in Refshaleøen | © Martin Kaufmann / Culture Trip