The 10 Most Iconic Arne Jacobsen Designs

Considered the grandfather of modern Danish design, architect and designer Arne Jacobsen made significant contributions to architectural functionalism. Even as a student in 1925, Jacobsen won the prestigious silver metal for his chair design at the Paris Art Deco fair. After the war, his iconic furniture and product designs propelled his name into design history. We discover more about Jacobsen’s mastery, examining his simple, but functional designs in minimalist Danish style. 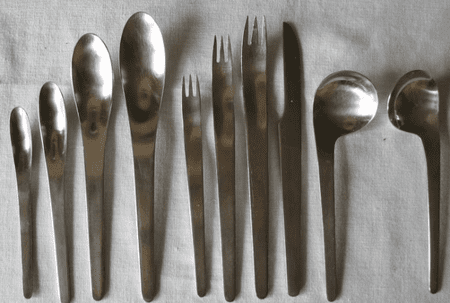 A minimalist classic, Arne Jacobsen flatware captures the essence of modern Danish style. Jacobsen first created the cutlery in 1957 for the Royal Hotel in Copenhagen, where it caused controversy for its simplicity and unique form. Since then, the narrow shape and slender contours of this Arne Jacobsen design have become a cult classic collection. The crew in Stanley Kubrick‘s film, 2001: A Space Odyssey and other sci-fi films used the flatware because of its futuristic appearance. The five-piece place-setting includes a dinner fork and knife, spoon, salad fork, and teaspoon made of matte-finish and stainless steel. The sleekly designed cutlery represents a work of art in itself and remains on sale at the Museum of Modern Art Store (MoMA). 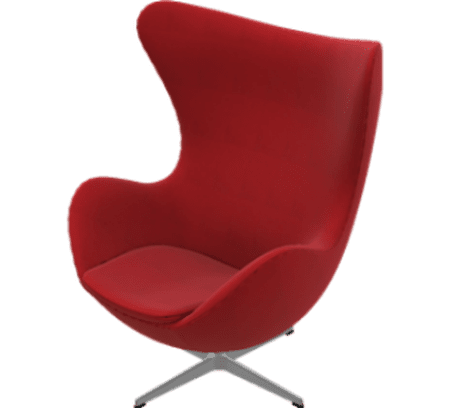 The Jacobsen Egg Chair has become an icon in modern furniture design. Commissioned for the Royal Hotel in Copenhagen, Denmark in 1958, the Egg Chair’s wavelike shape demonstrates Jacobsen’s ingenuity to create furniture with a simple yet elegant construction. While seated in the chair, the contours cocoon the sitter in his own private space, and the four-star aluminum base allows the chair to rotate and recline. Today, the Jacobsen Egg Chair sits in some of the world’s finest lobbies and lounges, but also perfectly suits any modern living room. A special edition couch version of the design recently sold for 400,000 DKR, about £47,000. 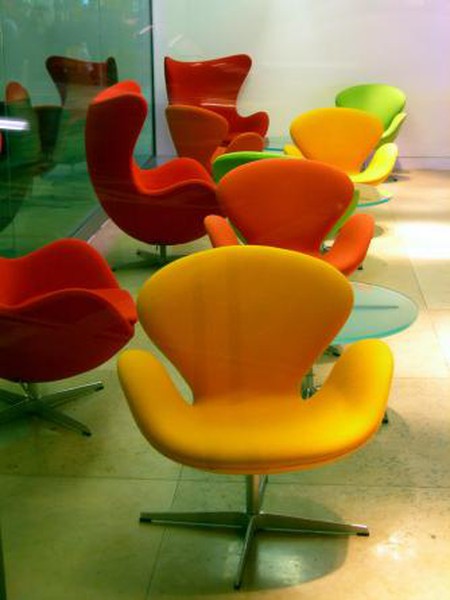 Like the Egg Chair, Jacobsen designed the Swan Chair and Swan Sofa as specialty pieces for the lobby, lounge areas and panoramic restaurant of the Royal Hotel in Copenhagen in 1958. The Swan Chair’s characteristic three-dimensional shape displayed technical innovation for its curvy design with no straight lines. Its frame contains a synthetic mold, covered by a layer of foam upholstered in fabric or leather with an aluminum four-star swivel base in satin polished aluminum.

When the Dean of St. Catherine’s College in Oxford decided to build an extension for the school, he chose Arne Jacobsen to design the surrounding landscape and a furniture series. The Oxford Chair resulted from this project, and represents another classic Jacobsen design which couples modernity with functionality. Designed in 1968 for the professors of St. Catherine’s Cathedral in the United Kingdom, the Oxford Chair has two variations, both perfectly suited for offices, board rooms or reception areas. The first version has a tall, wood laminate back and sits around the dining hall’s high table. The other model, characterized by a shallow, curved swivel seat, narrowed armrests and a low backseat, appears in the teaching staff offices. Critics have lauded the Oxford Chair for its sophistication and ergonomic design.

The appropriately dubbed Ant Chair received its name for resembling an ant with a head raised. Jacobsen designed the Ant in 1951 for the canteen of a Danish pharmaceutical company, Novo Nordisk. Today, the Ant stands out as one of the prominent icons of this particular Arne Jacobsen furniture collection. Originally, the piece had three plastic legs and a seat made from form-moulded laminated veneer. The light, stable Ant Chair easily stacks and the three legs prevent the sitter from getting feet tangled. Later models added a fourth four leg all made from tubular steel. The chair almost didn’t make it, as Jacobsen’s production partner, Fritz Hansen, did not see the chair’s potential. It has since proved very popular and further evolved into the Series 7 Chair, which became the most sold chair in the history of Fritz Hansen.

Around the same time that Jacobsen conceived the Ant, he created another small wonder. Jacobsen came up with the irresistible Dot design by accident during factory testing for the Ant Chair. He loved the simplicity of the piece and used it for one of his most important projects at the time. The simple, stackable bar stool offers charm and functionality, providing seating, decoration and handy help around the home. It easily adds a touch of color to any room, and The Republic of Fritz Hansen continues to sell the stool, available in a full range of colors as well as beech veneer and walnut. 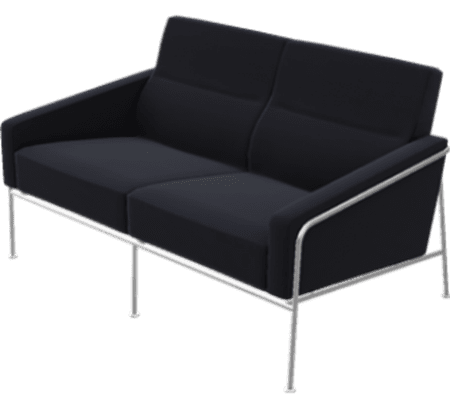 In the late 1950s, Jacobsen designed the Series 3300 for the SAS Terminal of the Royal Hotel in Copenhagen. This Arne Jacobsen furniture design harmonizes with his architectural work during that period, utilizing straight lines and perfect proportions. The couch’s cool, streamlined shape contrasts with that of the organic, curvy contours of the Egg and Swan Chairs, which also appeared in the same hotel. The Series 3300 generally comes in leather and fabric upholstery with a chromed base. Variations include one, two and three seats, perfect for lounges and waiting areas as well as in private homes.

Otherwise known as chair model 3208, the Lily Chair received its nickname for resembling a blossoming lily flower. The chair, made from laminated slice veneer, undergoes a very complicated molding process to achieve its blooming curves. Jacobsen designed the Lily for the Danish Central Bank and premiered it at the Danish furniture fair in 1970. Lily comes in black, white or red lacquer, front upholstery or full upholstery. 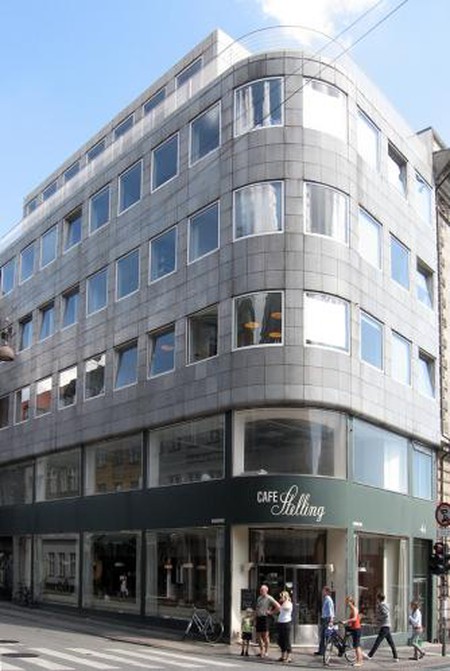 Although most famous for his furniture designs, Jacobsen also deserves credit for his architectural achievements that strongly defined Nordic modern design. Built in a modernistic style, The Stelling House stirred up controversy at the time of its construction as an avant-garde building in one of Copenhagen’s most historic squares. Since then, the Stelling House has become a prime example for building in a historic setting because of its restrained design that complements the classicism of the surrounding buildings. The reinforced concrete structure stands six storeys tall with the top floor slightly set back. Green painted steel covers both bottom storeys while grey tiling adorns the upper part of the building.

Even 70 years after its completion, the uniquely designed Aarhus City Hall still represents a modern marvel. Built by Arne Jacobsen in collaboration with fellow Danish architect, Erik Møller in 1937, the structure stands out with its jutting clock tower and three staggered building elements. Aarhus City Hall sits in the Aarhus city center surrounded by parks. The style reflects Nordic modernism, with organic lines that soften the business-like, constructive building made of concrete plated with marble. The interior made of brass and wood makes an elegant impression. 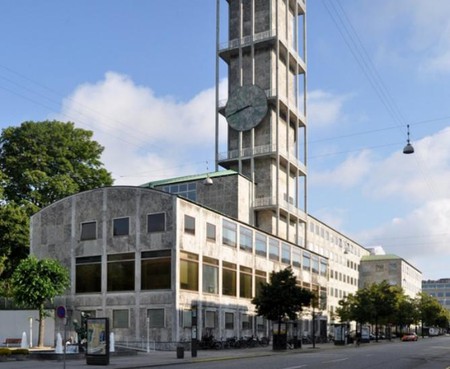