An Expert’s Guide to the Best Bars in Copenhagen 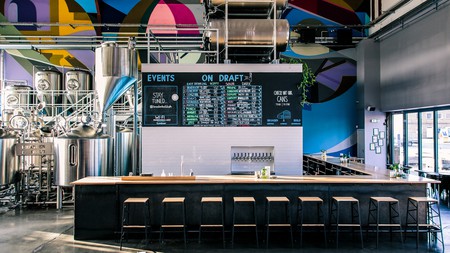 Copenhagen’s no-efforts-spared food scene has basked in global fame for years now, thanks to two-time best restaurant in the world winner, Noma. Now, a wave of drinking spots are taking on the same ethos, with top-tier cocktail mixologists taking as much delight in experimenting with gins, whiskies and rums as the city’s chefs do with their carefully sourced farm-to-table ingredients. 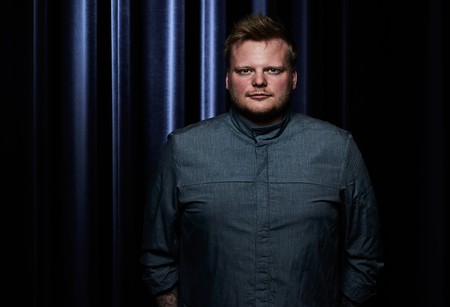 Danish drinking culture has had a reputation for being “quite crazy”, according to the chef at Copenhagen’s innovative Alchemist restaurant, Rasmus Munk. “But if you focus on the quality in Denmark and Copenhagen, the scene is developing so much right now,” says Munk, referring to an increased emphasis on the calibre and creativity of drinks served in Denmark. “We have some really great cocktail bartenders who have, over the past three or four years, done an amazing job.”

Wine bars and breweries are also getting in on the action, with brewers experimenting more with flavour, and talented sommeliers curating both classic and trendy natural wine lists, not to mention focussing more on sustainability.

Munk knows a thing or two about a good drink – the wine list at his own restaurant, Alchemist, in up-and-coming Refshaleøen, is expertly hand-picked and accompanied by an impressive cocktail collection that includes a solidified gin and tonic. Here’s his guide to Copenhagen’s coolest drinking spots.

In the same stretch of Refshaleøen warehouse buildings as Munk’s Alchemist, Broaden & Build serves draught and craft beers with a culinary twist. By using cooking techniques – such as toasting or fermenting ingredients – to brew their beers, Matt Orlando (ex-Noma chef and the owner of nearby restaurant Amass) and brewer Tiago Falcone hope to achieve something more special than the usual two-a-penny craft-beer bar. This ethos comes out in creative brews made with Danish ingredients, such as a low-ABV lacto-fermented rhubarb gose stout with toasted walnuts, a kölsch-style beer with fennel flowers and lemon, and a golden ale with elderflower. “Matt focusses a lot on sustainability and how to use every aspect of the ingredients,” says Munk. “They serve amazing beers and a roast every Sunday with different chefs.”

“This new cocktail bar is really inspired by New York,” says Munk, alluding to the speakeasy-style “secret door” that opens onto Kyros and Co. Spirits served at the softly lit, atmospheric space are distilled in-house (Munk recommends trying the infused gins), while the bartenders aim to incorporate commonplace flavours into their cocktails in inventive ways – think distilled and fermented coffee and cornflakes with tonka-marinated milk syrup and cream sherry, and a Johnnie Walker Black Label that’s been re-distilled to remove the caramel notes and paired with a smoked tea soda.

This bar comes from Christian Tang, the same bartender who set up Kyros & Co. and who Munk describes as “very talented”. “Balderdash is really experimental in terms of what cocktails can be – I’ve had some of my best cocktails here,” says Munk. “Tang’s very playful in his way of doing things. He has an ice-cream soda cocktail and all kinds of weird cocktails.” Munk has previously collaborated with Tang, who created a “blood cocktail” to go with one of his Alchemist menus – Munk served a lamb’s heart with an organ donation card, prompting 1,500 Danish diners to sign up as donors. Low lights, relaxed jazz and a working fireplace in an 18th-century home give this bar its unique atmosphere, and bartenders’ exploits have included extracting the amber hue from Campari to make a blue negroni, creating a Midori slush puppy and adding foie-gras distillate to a strawberry old fashioned. “It’s sometimes too much,” says Munk. “But I like that. I think that’s part of it – it’s nice if people are challenged a bit.” 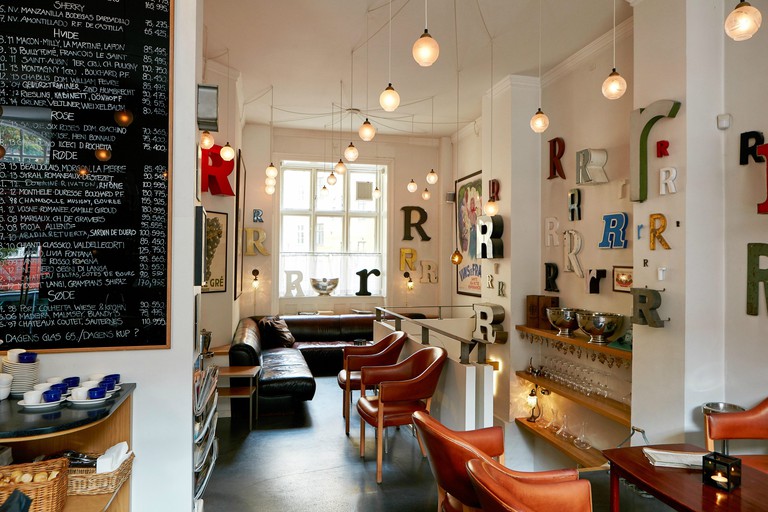 Run by Bo and Lisbeth Jacobsen, the same chef couple behind modern Danish restaurant Restaurationen next door, R vinbar’s drink collection consists of classic wines. “You can find wines with a lot of depth and age, and it’s rare to find bars like that,” says Munk. “Right now all the wine bars popping up are very focussed on natural wines – and Bo’s is quite the opposite.” Not that the owners purposefully steer clear of natural wine, but the criteria for the “amazing collection” at R vinbar, in Munk’s words, is that it has to taste good. Team this with a menu of luxury bar snacks, such as preserved Cantabrian seafood, oysters (paired with chablis), select cheeses and charcuterie, plus cake and port pairings, and you’re set for the evening. 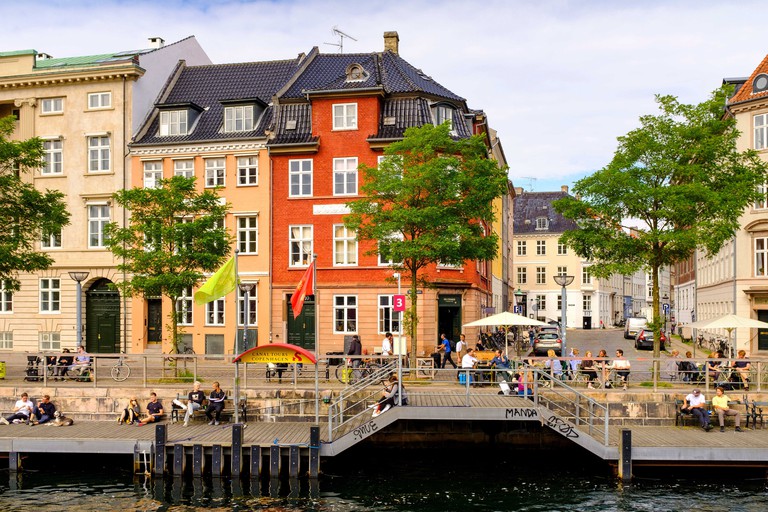 Ved Stranden 10 is a popular spot on summer evenings | © Bernard Bialorucki / Alamy Stock Photo
This typically Nordic bar, which serves wines by the glass, is a popular spot on Danish summer evenings. The interior has a lot of natural light, and Munk praises the “good vibe, friendly staff and beautiful location”; the outdoor seating overlooks the Slotsholmen Canal and the Danish Parliament building, Christiansborg Palace. “Ved Stranden is probably one of the most popular wine bars [in Copenhagen]. There’s a lot of natural wine, and a lot of sommeliers like it, too. I don’t like to put things in a ‘natural wine’ or ‘conventional wine’ box – it just needs to taste good for me. But some of the best natural wine I’ve ever tasted has been here.” 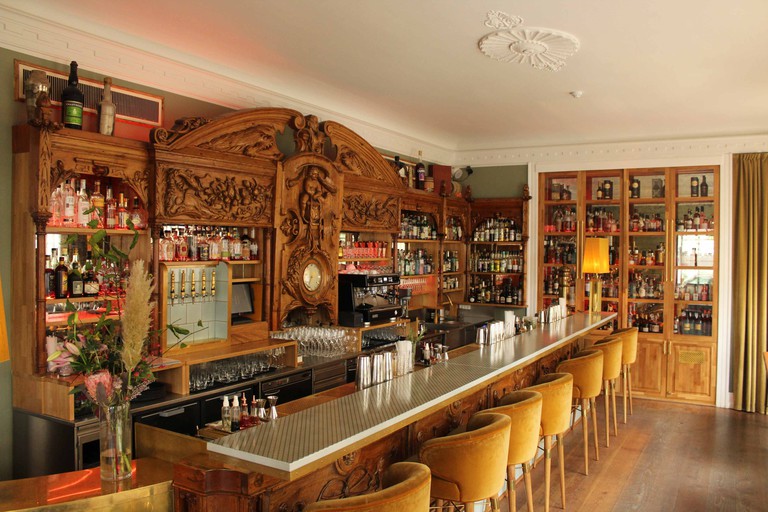 Brønnum has been a café, restaurant and bar for the past 125 years, and has been frequented by its fair share of musicians, artists and writers – including Hans Christian Andersen. The historic building, opposite the Royal Danish Theatre, houses a 150-year-old, wood-carved bar that used to be part of an apothecary, and is filled with dimly lit nooks and plush velvet furnishings. “Brønnum is a very classic cocktail bar, very New York-inspired. It’s classic cocktails, with a little touch,” says Munk. “They do the best espresso martini here, and they have an amazing selection of different whiskies from Japan.”

This article is an updated version of a story originally created by Rainer Mesi.