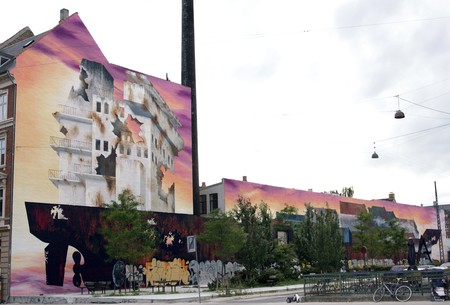 Discover 10 up-and-coming street artists from Copenhagen who travel around the world with a suitcase full of colorful sprays and transform cities’ grey buildings into colorful canvases. While some of them aim to address social and political issues through their artworks, others are inspired by nature or hip-hop culture. However, each one has its own distinctive style and all of them have done their bit to make Copenhagen more beautiful.

For approximately 17 years, Soten has been roaming around the world with a spray can in his hand, painting any kind of building or cultural event gallery. So, he is not considered to be exactly what we would call an “emerging” artist, but rather an established one who has already left his – colorful – mark in four continents. However, we couldn’t resist including him in our list.

In an interview he gave on Arte TV in 2015, he said that he first discovered graffiti when he was a teenager and watched Style Wars with one of his friends. After that, street art became a passion and a need. He claims that he prefers creating graffiti than a painting on canvas because the latter is just hanging on a white wall without communicating with all the surroundings like graffiti does. 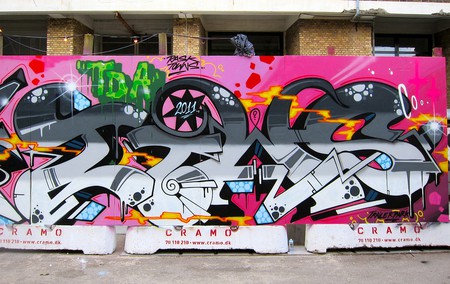 Tejn has “seized” the streets of Copenhagen since 2007 and today the city is full of his artwork, including stencils, paintings on paper and Lock Ons iron sculptures. Lock Ons are among his most renowned and interesting projects. Sculptures made of salvaged iron that was found in various areas around Copenhagen are tied with bike locks in different parts of the city. If you’ve seen one of those in Berlin, don’t be confused; Tejn has been there too. When he is not out in the streets, he is exhibiting at some gallery, always striving to address significant social issues with his artworks. 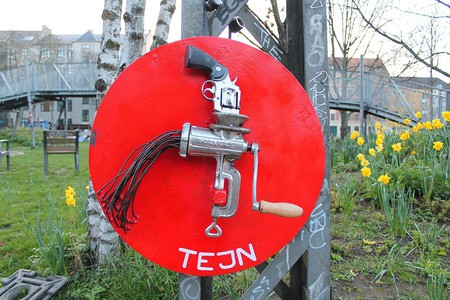 Andreas Welin is only 24 years old but his name is already known in the street art scene. He started doing graffiti in 2011, and ever since not only has he not stopped painting, but he has traveled overseas and decorated 30 New York buildings’ façades with large-scale murals. His graffiti has decorated several festivals including the world-famous Roskilde Festival as well as buildings in several neighborhoods all over Copenhagen. 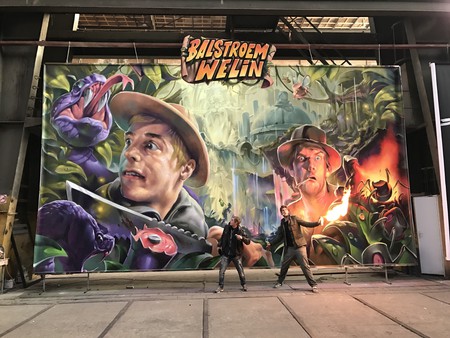 It’s not an exaggeration to say that Don John is one of the world’s most talented artists and that his paintings are a real piece of art. Even though his passion is graffiti, he has also exhibited his artwork in various galleries from Copenhagen and Odense to Australia and California. He always strives to paint places that will benefit the public space and he has stressed that the feedback he gets from the people in the streets is more important to him than the art experts’ reviews. If you’re lucky enough you’ll see some of his murals while walking at the streets of Copenhagen, Berlin, Hamburg, Reykjavik, New York, Tokyo and many other cities all over the globe. 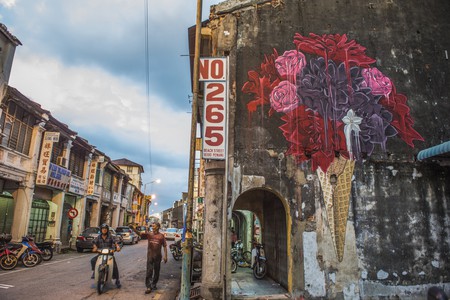 Peter Skensved started painting in the streets when he was a child and instantly fell in love with the process and the impact of street art. For him, creating murals and graffiti on buildings is a way to contribute to keeping the city alive.

“Small contributions and surprises that might give to people a slightly new experience on a well-known route to work, school or whatever. You walk in your own thoughts and suddenly see something new. I believe that it is in these instances that new ideas can arise,” he says. “Some might just give the painting a quick glance, while others linger around for a while. Some might even get a smile on their face.” 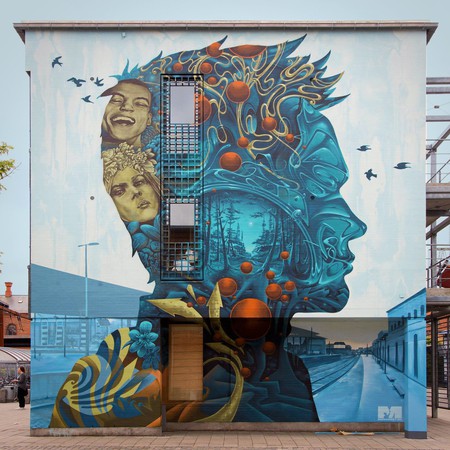 Tonek is a Copenhagen-based graffiti artist who loves designing cartoony, colorful, new-school and hip hop paintings. His story in street art began as a teenager when he started doing small projects on Christiania’s walls. In short time his paintings became more complicated and now, as he says, “there is not a wall too big for Tonek”.

It wasn’t too long after when he discovered his love for the art of tattoo and over the past three years he has been drawing his designs on skin. As he told us, he went through a few different tattoo masters and made many tattoos within a very short time, but the fact that he was already a known artist among Copenhageners played a crucial role in gaining the trust of customers. Even though at the moment he spends most of his time in All Ink Tattoo studio, he’s always looking forward to hitting the streets with a spray can in his hands. 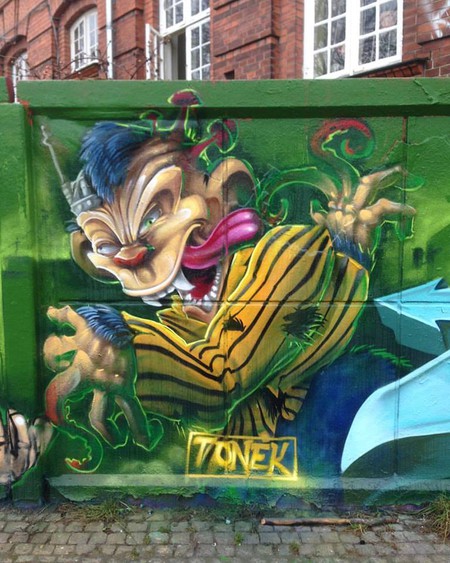 Unfortunately, we couldn’t find much information on Organ81 but the paintings in Copenhagen’s neighborhoods speak for themselves. Organ81 is a Copenhagen-based street artist who draws inspiration from every day things and through paintings aims to address environmental and social issues. It’s a way for Organ81 to remind to all of us of significant matters that affect everyone’s lives. Among others, the painting of a huge bee for example, decorates Sønder Boulevard street, stressing how pesticides affect beehives all over the world while the mural of a red butterfly at Copenhagen’s Trianglen is inspired by one of the most threatened butterfly species in Denmark, Euphydryas aurinia (Den Røde Hedepletvinge). 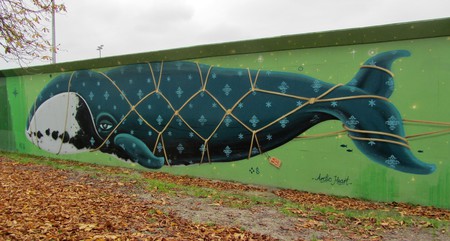 The Copenhagen-based artist enjoys painting animal and human characters on walls, paper and canvas. Besides Denmark, Lints has done his magic on walls in several countries such as Ireland, California, Chile, England, and Israel.

Talking about his artwork to Culture Trip, the talented artist said: “Painting walls is, for me, a natural extension of drawing. I love to draw in different sizes and walls that offer you a scale that’s not available anywhere else. It allows your work to interact with the environment and the people that might pass by, whether it be the man in a suit or the homeless guy in an abandoned building. Through the years the theme of my work has changed and has become more and more influenced by nature. Maybe it’s because of where I grew up or perhaps I’m just getting old and nostalgic.”

Use the hashtag #mycursedlefthand to discover his creations or visit directly his webshop and check out his prints and illustrations. 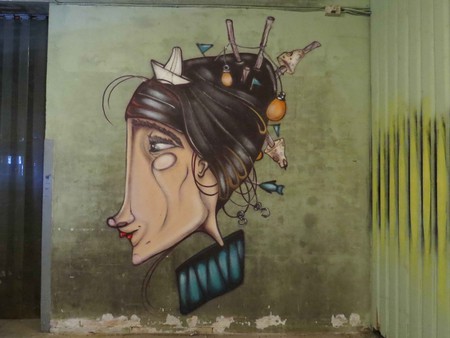 Simon Hjermind Jensen is one of the artists behind some of the beautiful murals that make Copenhagen a bit more beautiful. Jensen has participated in many mural projects and collaborated with other renowned street artists, such as Anders Schmidt and Theis Wendt. Even though at the moment he is much more into architectural themes as he told us, he always keeps his eyes and mind open for a new mural project which means that, luckily for us, he definitely hasn’t done his last big mural yet. 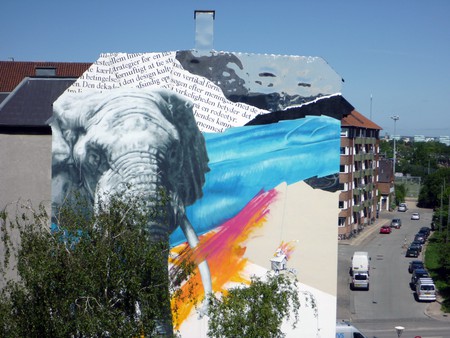 When Rikke Lydeking painted her first mural at the Student House in Copenhagen, she decided that she’ll never stop painting. She studied History of Arts and English Literature in Copenhagen and Oslo, but the moment she grabbed a brush and a pencil while taking an art class in New York, she knew that painting was what she wanted to do for the rest of her life. 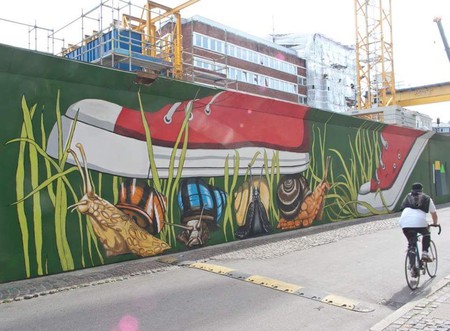