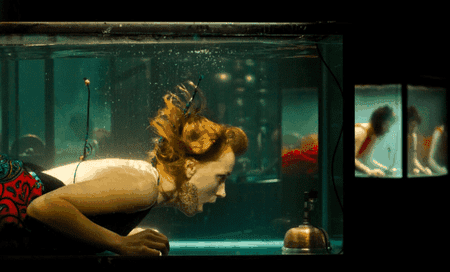 Laila Skovmand was just messing around in her kitchen one day when she decided to dunk her mouth in a bowl of water to see what it would sound like to sing.

‘It didn’t sound good at all,’ she admits ruefully. ‘But I was very intrigued by this very sensual feeling of playing with the water.’

Curious to experiment more, the Danish singer and composer developed her own technique on how to sing underwater, and even tested out a violin submerged. It collapsed after a few days.

She now uses instruments specially created by Bjork collaborator Andy Cavatorta and has set up her own band, Between Music, to perform alongside her underwater.

Her bandmate and the group’s manager Robert Karlsson says: ‘We started with a workshop in a swimming pool. Then we borrowed some portable aquariums. The first years were about finding instruments that sounded good underwater. We realised that we needed to make our own because most of the normal ones don’t work underwater.’ 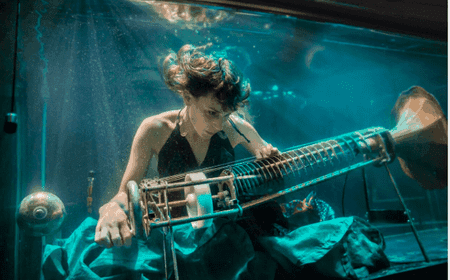 These include a hydraulophone, which is a water organ, a crystallophone, a modified glass harmonica, and a rotacorda, a six-string hurdy-gurdy that can be played like a guitar.

The collective will be bringing their AquaSonic concert, the first part of a series about human evolution, to Glasgow’s Sonica festival this week.

Each performance sees the band members underwater wearing waterproof in-ear headphones in their own individual tanks along with instruments and a microphone.

‘The one thing I really love about the sound underwater is it is a little distant,’ says Sokovmand. ‘Because it’s difficult to get really high frequencies and really low frequencies, you have a lot of middle range. For me, the sound is like going back in time.’ 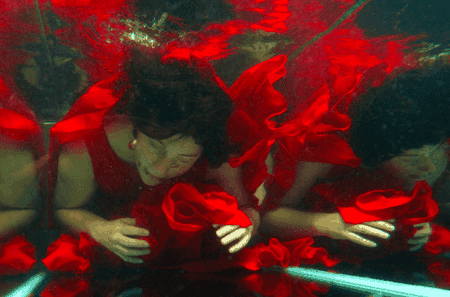 But it’s not just the sound that belongs to another time. The whole experience for her is like regressing back to the womb.

She adds: ‘We come from water. Our first nine months in the stomach, we heard everything through a water filter.’

Breathing is integrated into their haunting performances, which seem almost otherworldly as they emit eerie vocals and sounds from inside their tanks.

Watching them is like witnessing a haunted shipwreck full of musicians come back to life as their hair waves like tentacles around them and air bubbles escape from their lips.

While they make it look effortless and graceful, they have undergone training to make sure they can hold their breath underwater.

Karlsson says: ‘We do a lot of breathing exercises. We learned a lot from divers and yoga teachers. When we first produced the piece, we were in the water five to six hours a day.’ 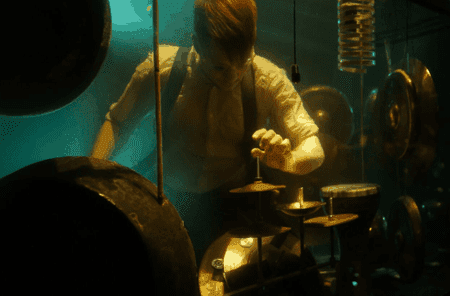 He claimed various factors affected how long the musicians could stay underwater, like how strenuous and active their playing was, along with the temperature. ‘If it’s a little too hot, you can’t keep your breath and the instruments sound less good.’

Skovmand claims she enjoys the performances because they force her to focus on the present moment, or ‘present-ness’, as she calls it. Letting your mind wander isn’t an option when you’re concentrating on not accidentally inhaling a lungful of water.

‘It’s so incredibly difficult to play music underwater. Both because of the sound waves because it’s difficult for them to travel rather than in air but also physically. Just to stay there and play. 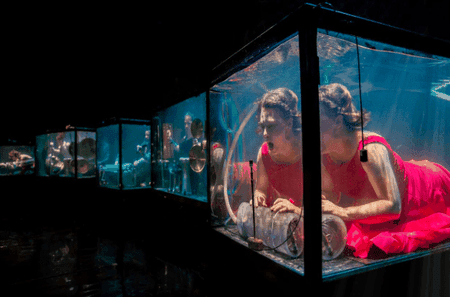 ‘When you’re obstructed, you have to repress your thoughts. You can’t think, “I have to wash the dishes when I get home”.

‘You’ve really got to stay there, be there and be in the moment. That’s one thing that I’m looking for when I’m making art projects – this present-ness. This is the thing that the audience can feel even though we are behind these big glass walls of the tanks. 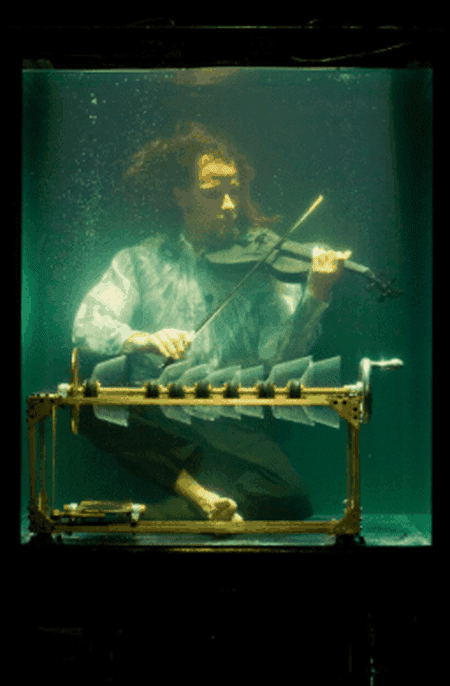 ‘It’s very sensual, it’s very fluid and to a certain degree it really feels natural to open your mouth, put water into it and start singing. On the other hand, it’s scary as hell because if you can’t hold the water, you get it into your lungs. So, there’s something about being in this in-between stage, of being at one with the water but also fighting against it.’

Living in the now has never looked so hypnotic.

Aquasonic takes place at Sonica in Glasgow this Thursday to Saturday. You can buy tickets here.