The Great Danish Poet of Dance and Disturbance 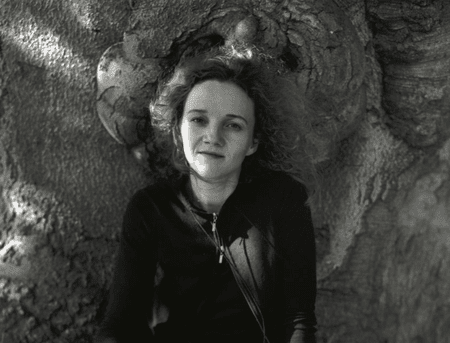 In Ursula Andkjær Olsen’s Third-Millennium Heart, the self and society are directed into poetic choreography.

Pina Bausch, the celebrated German choreographer, followed a candid dictum: “Dance, otherwise we are lost.” In only a few words, the direction showcased multitudes. In considering what the body writes, she tells us “speak, otherwise we are silent.” In minding what the body crafts: “create, otherwise we are pointless.” Dance differs from other art forms in that it is self-metaphoric, a dance between the body and the mind. The brain housed for life in the head, automates certain corporal functions to keep us alive and liberates others that allow us to explore life. To dance, then, is to observe and converse with one’s body in relation to itself and the space around it. To be a dancer is to be a poet of the physical world.

What is it then to be a dancer of the written word? As I read Third-Millennium Heart, the mesmerizing English debut poetry collection of the acclaimed Danish writer Ursula Andkjær Olsen, the answer appeared on the page as though translated from Labanotation. Her poems are at once dimensional and kinetic with verses bursting out from stanzas to claim their own pages: Does the wave fear its dissipation, or does it feel itself in everything she asks in the poem “My Name Is Waiting Room.” Though this line is isolated on an otherwise white page, it’s space that provides the skin of the poem, which continues on the recto page:

Relations like these may at first appear obtuse, but in fact provide a code to understanding Olsen’s sapience. Rendered into crystalline English by Katrine Øgaard Jensen, one can sense the sweat gleaming from Olsen’s brow as she navigates her psyche, at times giving in to the furious rapture of giving poetic form to perspicacious discernment — I am everyone (that is closeness), I have to be everyone — and at others surrendering herself to darker revelations — To be the evil one and never afraid. What Olsen never stops doing is dancing.

In her translator’s note, Jensen notes the challenges of rendering Olsen’s mercurial use of voice: “The speaker in Third-Millennium Heart is an ambiguous character: abusive, yet a victim, fiercely emotional, yet icy and cynical.” Jensen also quotes the Danish critic and scholar Ida Bencke who puts forth an even deeper assessment of Third-Millennium Heart as “an utterly monstrous character of the body…a heart, whose arteries and chambers lead us into into complex architectural constructions…” and from which “a terrifying female figure arises, spewing a long list of contradictory judgments and prophesies out over the Western world’s perverted civilization and market mechanisms.” 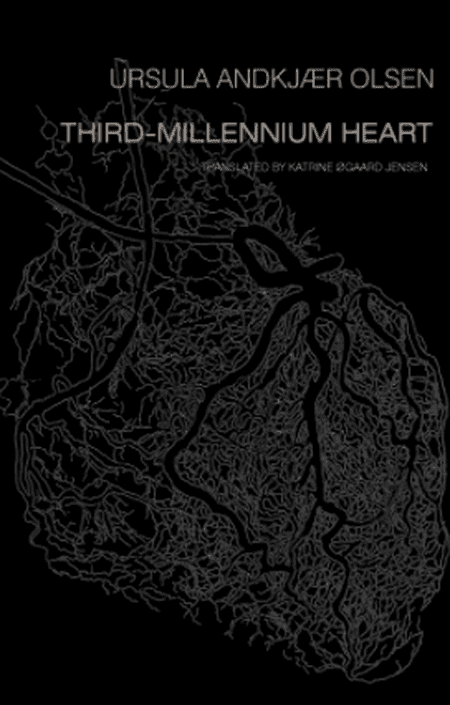 While my reading of this collection differs from Bencke as it does from other reviews of this book, I agree with Bencke that no reading of Third-Millennium Heart is incontestable—to me a sign of a great work. It can be almost startling to follow Olsen throughout the collection, where she fluidly moves from an interior dance to exterior pugilism. In the poem “Great Transactions,” Olsen linguistically firebombs capitalism and greed, at one point literally penning “Your money up in my ass” as though she were spray-painting it on the side of a bank.

This will come to no surprise to those more familiar with her work: in Denmark, Olsen is a socially outspoken feminist and activist (this past year, Olsen published a novel that flipped the myth of Pandora, letting the ancient figure tell her side of the story). In a recent interview with Informatíon, she is quoted as saying*: “It’s pitiful to believe that every person can do something about market forces and climate change — but we must dare to be pitiful.”

Such is the heat one encounters when walking the coals that burn inside us — which can lead one toward non-violent activism or hyper-violent extremism. But throughout the collection, Olsen never fully loses herself to herself, using the rhetorical technique of chiasmus of flipping verse to inverse to maintain a mental balance, and never letting her meditations lead to ruminative traps. See how she does this in the poem “These My Contact Areas”‡:

The goal is: never having to confide in anyone. It’s the same
as never feeling the urge to write a word.

The idea that this goal is false.

The hope that this goal is false.

The idea that it’s an advantage to know what you wish to destroy.

The idea that it’s a disadvantage to know what you wish to destroy.

I
you
castles
towers
spires.

The idea that it’s a disadvantage to love what you wish to control.

The idea that it’s an advantage to love what you wish to control.

Third-Millennium Heart brings to mind Daisy Hildyard’s The Second Body, another recent work that investigates what it is to be a body in the world. To Hildyard every individual is made of two bodies: a personality with individual concerns and a microbe in the grand organism that is planet Earth, which has universal concerns. “I need to find some places where real life and this global truth — the two bodies — come into one another.” Not surprisingly, Hildyard most often finds examples of this in the history of literature, from Shakespeare to Ferrante. Third-Millennium Heart is an ideal work to join that canon.