The 10 Most Exclusive Michelin Starred Restaurants In The World 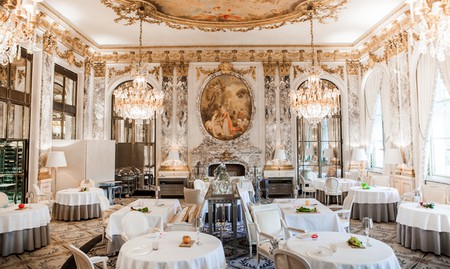 As gastronomy’s official guide, Michelin only hands out its stars of excellence to the best of the best. Founded over a century ago, today Michelin are the taste-makers of the restaurant industry — its anonymous inspectors can make or break a restaurant’s reputation. From Japan to Lima, here are the most exclusive Michelin-starred restaurants in the world to book a table at now. 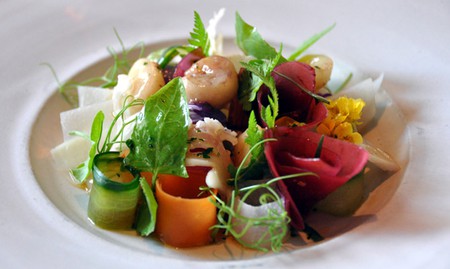 Restaurant, Danish, $$$
Facebook
Email
Twitter
Pinterest
Copy link
Share
Map View
Honored as the world’s best restaurant from 2010-2014, Copenhagen‘s Noma, a portmanteau of Danish words nordisk (Nordic) and mad (food), is one of the world’s most exclusive dining establishments. Opened in 2003, head chef René Redzepi and his team have created their own interpretation of Nordic cuisine through foraging the land’s flora and fauna and making surprising discoveries through Noma’s ‘fermented kitchen’.
Open In Google Maps
96 Refshalevej, København K København, 1432, Denmark
+4532963297
Visit Website
Give us feedback 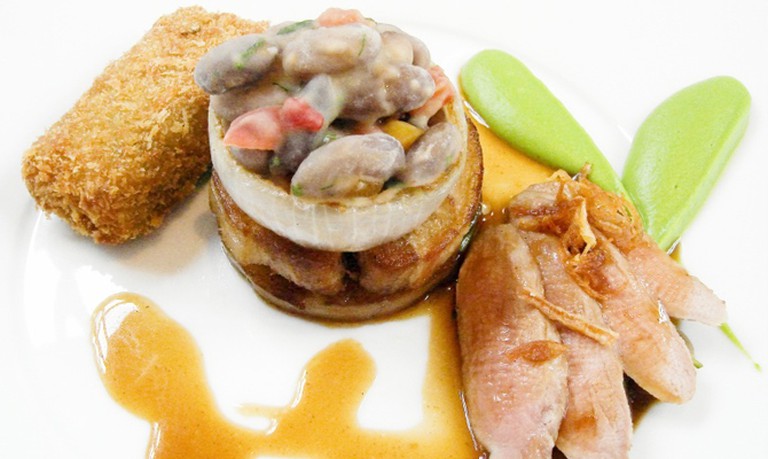 DSC01462 | © Leon Brocard via Flickr
Owned by TV chef Heston Blumenthal, The Fat Duck is a French bistro in Bray, Berkshire, with three Michelin stars. At this establishment, there is around one chef per diner, all prepared to cook up dishes for the experimental fourteen-course tasting menu. Blumenthal aimed to create a sensory experience with the Fat Duck’s menu, incorporating psychology and diners’ preconceptions into his culinary choices. Over the years, the restaurant has created signature dishes such as egg and bacon ice cream, snail porridge, ‘Sounds of the Sea’ and Triple Cooked Chips, the latter of which have now become a gastropub staple. A ‘ticket’ to The Fat Duck costs £255 per person and there is a waiting list of on average three months.
Open In Google Maps
High Street, Bray, SL6 2AQ, United Kingdom
Visit Website
Give us feedback

Restaurant, European, $$$
Facebook
Email
Twitter
Pinterest
Copy link
Share
Map View
Beginning his career in a small fish restaurant in Newcastle, Australia, Brett Graham has gone from strength to strength, working at Banc, The Square under Philip Howard, and garnering the title Young Chef of the Year in 2002. He went on to open The Ledbury in London, in 2005. Championing the best of British produce, The Ledbury features delights including Scottish langoustines, Belted Galloway beef, as well as Yorkshire grouse and woodcock during the game season. There are two eight-course tasting menus (one vegetarian available, and the restaurant has gained many accolades including its second Michelin star in 2010. The Ledbury currently sits at number 20 on San Pellegrino’s World’s 50 Best Restaurants list.
Open In Google Maps
127 Ledbury Road, Notting Hill, London, England, W11 2AQ, United Kingdom
+442077929090
Visit Website
Give us feedback
Book Now

Restaurant, Italian, $$$
Facebook
Email
Twitter
Pinterest
Copy link
Share
Map View
Born and raised in Modena, chef Massimo Bottura describes growing up ‘under the kitchen table, escaping his brothers’. In opening Osteria Francescana 20 years ago, he aimed to take past culinary traditions and bring them into the present to offer something new to the Italian table. Taking only the finest of the region’s produce, the dishes are executed with contemporary flare for a truly unrivaled experience. There are two tasting menus; Sensations, currently titled ‘Come to Italy with Me’, a gastronomic journey across Italy with 12 seasonal tasting plates, and Tradition in Evolution, an exploration of Emilian cuisine which includes the signature ‘Five Ages of Parmigiano Reggiano’. The restaurant has garnered three Michelin stars and enters at number two on the World’s 50 Best Restaurants List in 2015.
Open In Google Maps
22 Via Stella, Modena, Emilia-Romagna, 41121, Italy
+39059223912
Visit Website
Give us feedback 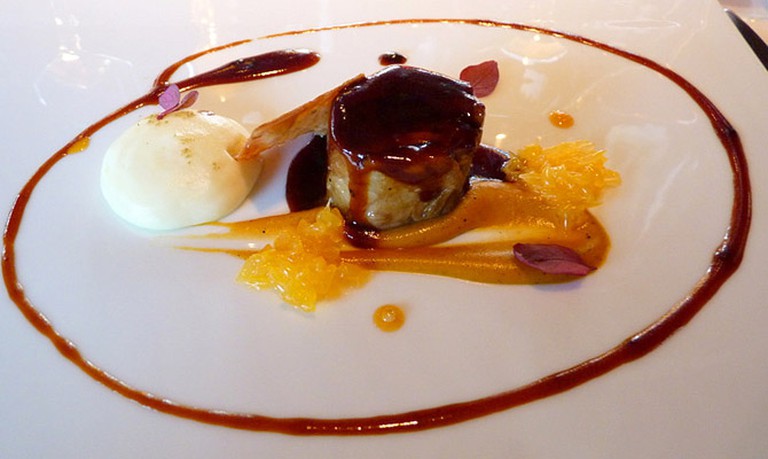 Xai amb terrina de boniato i mandarina | © dpotera, via WikiCommons
Set inside the five star hotel on the edge of the Tuileries garden in Paris‘s first arrondissement, Restaurant Le Meurice is the epitome of sumptuous refinery. Decorated by master architect Philippe Starck in 2007, the dining room is inspired by the Salon de la Paix at the Château de Versailles. Le Meurice has since undergone several more renovations, with three-star chef Alain Ducasse taking over the kitchen in 2013. A name that needs no introduction in foodie circles, Ducasse’s credo is, ‘we must return to the essentials. Start from the beginning, where tastes are real and aromas are genuine.’ This is exactly what he achieves with sublime flare. Try the Collection Menu, a five-course journey featuring vegetables cooked in salted crust, lobster with Jerusalem artichokes, Albufera poultry and tartufi di Alba.
Open In Google Maps
228 Rue de Rivoli, Paris, Île-de-France, 75001, France
+33144581077
Visit Website
Give us feedback

Brothers Josep, Jordi and Joan Roca make up the team behind El Celler de Can Roca in Girona, Spain. Described as a ‘free-style restaurant’, El Celler de Can Roca has come a long way from its opening in 1986, to its current number one position on the World’s 50 Best Restaurants list. Over the years, triumphs on the menu have included pigs trotter carpaccio with penny bun, lobster parmentier with black trumpets (one of the longest standing dishes on the menu), clam with grapefruit sorbet and Campari, and caviar omelet. El Celler de Can Roca was awarded their third Michelin star on November 25, 2009.

Hailed as the world’s greatest sushi restaurant, Sukiyabashi Jiro is hidden in the least likely of places for a three-Michelin star restaurant – a metro station. With only ten seats available, it’s safe to say that this is as exclusive as it gets. Owned and run by master sushi chef Jiro Ono, still active on site aged 90, Sukiyabashi Jiro was propelled into the limelight through Antony Bourdain’s No Reservations TV series and David Gelb’s documentary Jiro Dreams of Sushi. The artful chefs work in front of diners, carefully brushing each piece of sushi with nikiri soy sauce before it is ready to eat. The only menu available is the Omakase Tasting Menu, put together every morning depending on the fish available, and served as 20 individual pieces of sushi. Ono’s unique preparation of sushi is deemed an art, and set him apart from the rest as the world’s best sushi chef.
Sukiyabashi Jiro, Tsukamoto Sogyo Building, Basement Floor 1, 2-15, Ginza 4-chome, Chūō, Tokyo, Japan (+81) 03-3535-3600 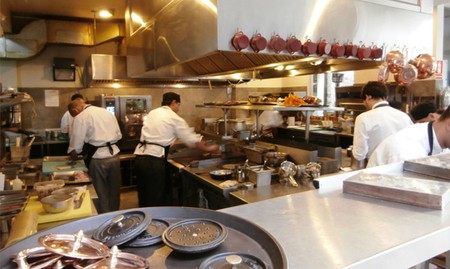 The kitchen at Central Restaurante | © WineDirector, via WikiCommons

Central ‘celebrates the biodiversity of Peru‘ with chef Virgilio Martinez taking contemporary Peruvian cuisine far and beyond ceviche. Dedicated exploration and research of the surrounding countryside, an in-house filtration system for only the purest water, and an urban garden result in a diverse and sensory menu. From the coast to the Andes and the Amazon rainforest, Martinez has managed to bring ingredients to the table that are unknown even to Peruvians themselves. Central turns nature’s rarest produce into dishes that are both beautiful and ground-breaking. 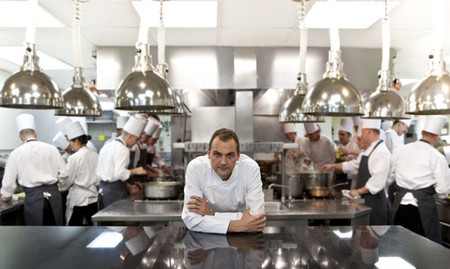 Earning his first Michelin star at the age of 24, chef Daniel Humm knows a thing or two about fine dining. Co-founding Eleven Madison Park with restaurateur Will Guidara in 2006, the three-Michelin star establishment excels in the both the kitchen and front of house service. An experience that is both whimsical and classic, the menu features interactive dishes such as ‘Name That Milk’ dessert; four specially-crafted chocolate bars presented in a box with pencils and animal drawings, where diners can guess which chocolate derives from which animal. Eleven Madison Park offers a seasonal tasting of 12-15 courses. 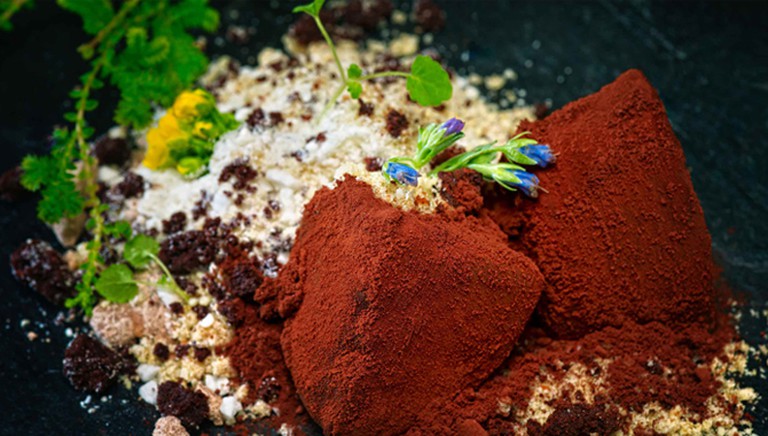 Arriving in Bangkok from Kolkata in India, Gaggan Anand had a mission to shake up Thailand‘s restaurant industry. The first chef of Indian origin to intern at Ferran Adrià’s world-famous El Bulli research team, Anand was compelled to open his own restaurant, Gaggan, to infuse the culture with progressive Indian cuisine. With only the best seasonal ingredients, Gaggan takes you on a food journey, exploring India’s rich culinary culture and rituals.