How to Spend 24 Hours on Bornholm 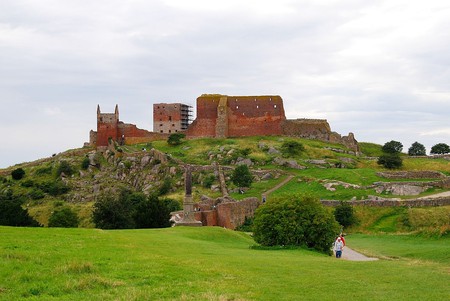 Bornholm is Denmark’s sunniest place, so no wonder this small Baltic Sea island is locals’ favorite destination for a short escape from daily life’s hustle and bustle. Spend 24 hours exploring picturesque little towns, climbing on granite cliffs, hiking across sandy beaches, and biking on the island’s more than 150 miles of cycling routes.

Bornholm’s main capital and the town that hosts the island’s airport is Rønne. This will most likely be the first stop of those travelling to Bornholm from Copenhagen. Take a walk around Store Torv, the city’s historic center, and spark up a conversation with locals while viewing the picturesque island for the first time. MadaGo is the ideal place to grab a bite and taste the local delicacies.

Take a stroll by the harbour and Rønne’s small neighbourhoods to observe the red and yellow brick houses that are considered the island’s trademark. Bornholm was occupied by Germans during the World War II and due to the extensive bombardments, the largest part of the city was destroyed. When it was reconstructed after the end of the war, the colourful houses now standing replaced the ruins and made Bornholm one of the most charming islands in Scandinavia. 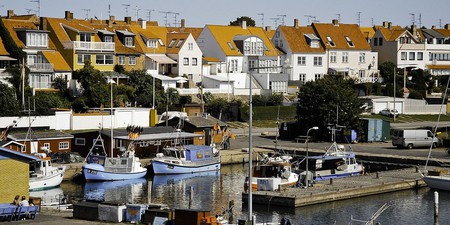 Nature lovers should head towards Hammer, the island’s northernmost place. It’s considered one of the most beautiful parts of the island and is approximately one hour by train from Rønne. Hike along the sandy coast and the island’s biggest lake Hammersøen, take a dive from the steep hills into the Opal Lake (Opalsøen), and visit the Hammershus Castle Ruins that stand on top of a cliff that stretches 74 meters (242 feet) above the sea.

After discovering Bornholm’s wild landscape, grab the bus towards Gudhjem, one of the island’s most known villages. Stop at Bornholms Kunstmuseum and discover the artworks of some of the most known painters of the Bornholm School. For an extra glimpse of the island’s diverse landscape, stop by the Sanctuary Cliffs (Helligdomsklipperne), Denmark’s popular awe-inspiring caves. As Bornholm is known for its traditional smokehouses, make sure to visit Gudhjem Røgeri and taste the locally smoked herring. The restaurant is particularly known for its special dish ‘Sol over Gudhjem” (Sun over Gudhjem), made with smoked fish, egg yolk, chives, and radish.

In about 10 minutes by car and 20 by bus (line 1), arrive at one Bornholm’s most important landmarks, Østerlars Rundkirke, the island’s largest and probably oldest round church. It is estimated that it was built around 1160 and its architectural characteristics show that in the past it was also used as a fortress.

Those exploring the island by car, have dinner at Bornholm’s most known and Michelin-starred restaurant, Kadeau. It’s located in the south of the island and takes approximately 30 minutes to get there by car. It’s a great way to end a trip to Denmark’s scenic island.

Those travelling by bus or bike, it will take more than two hours to get to the restaurant, so a nice alternative is to explore the less touristy side of the island in Svaneke City. It takes only 30 minutes to get there by bus from Østerlars Round Church. Take a walk around, check out the famous Svaneke Watertower that was designed by Jørn Utzon, the architect of the Sydney Opera House, and weather permitting, make a picnic at Hullehavn Beach and relax while enjoying the peaceful view. 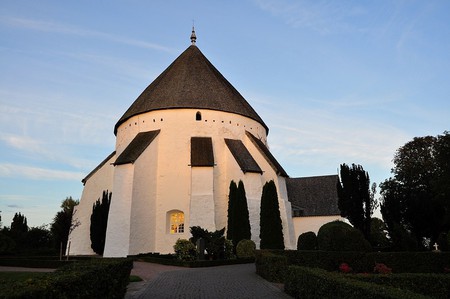