How CoBrA Became One of Europe's Biggest Art Movements 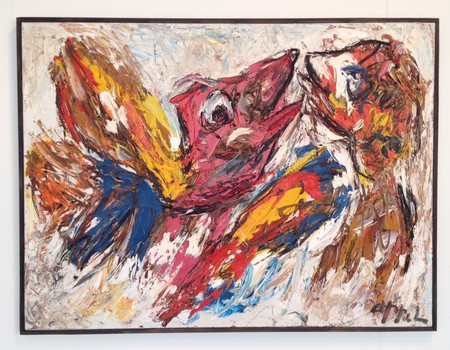 On 8 November 1948, Karel Appel, Constant, Corneille, Christian Dotremont, Asger Jorn, and Joseph Noiret met at Café Notre-Dame in Paris. Later that same day, the CoBrA movement was formed. Even though it lasted for only four years (1948-1951) it is still considered one of the most influential post-war art movements.

The meaning of the movement’s name

Asger Jorn was from Copenhagen, Joseph Noiret and Christian Dotremont came from Brussels, while Karen Appel, Constant and Corneille were from Amsterdam. So they decided to name their artistic collective based on the initials of their home cities: Co(penhagen), Br(ussels), and A(msterdam). Later, more artists from all over Europe and the US joined CoBrA, which resulted in a name change in 1949 as the founders changed it to Internationale des Artistes Expérimentaux. However, the new name never won over critics or art lovers and so, for the artistic world, they remained known as the CoBrA movement.

A few days after their meeting at Café Notre-Dame, the founders of the CoBrA Movement signed a manifesto written by Christian Dotremont, entitled ‘La cause était entendue‘ (The Case Was Settled). The manifesto, which was published shortly afterwards on the magazine Reflex, presented the artistic style this new European avant-garde movement would have. Through their text, CoBrA’s founders expressed their rejection of the sterile art forms that were dominating the art scene in the previous two decades.
The name of the manifesto was a play on the title of a previous document a breakaway group of Belgian and French Surrealists had written in 1947, with the title ‘La cause est entendue‘ (The Case Is Settled). Asger Jorn and Christian Dotremont were members of this group, so the manifesto’s title had a deeper meaning for them, which was to point out CoBrA members’ criticism of traditional surrealism. 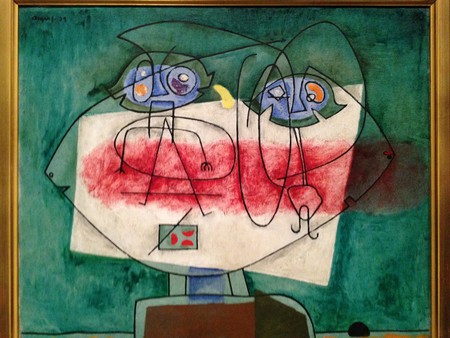 Despite CoBrA’s original members being established artists known prior to the creation of the CoBrA movement, their need to be reborn artistically was the reason they formed this artist collective. “We wanted to start again, like a child,” Karel Appel said. So they created a non-conformist art movement characterized by artworks with intense colors and bold shapes, which were inspired by children’ drawings, artworks from ancient Africa and Asia, mythology, and from disabled people’s artworks. Believing that naturalism and abstract art were very sterile and conservative, CoBrA artists strived to create pieces that didn’t follow any rules or norms. Therefore, they painted images portraying animals, humans, and fictional figures in ways that no artist had dared to do before. For them, the process of painting was far more important than the final result, and it’s been said they chose to create childlike paintings in order to communicate this message with the audience.

CoBrA was also a political movement, and its founders’ Marxist beliefs played a vital role in their artistic styles. Being opponents of individualism, they often created murals, publications, prints, and collaborative projects. For example, in 1949, members of CoBrA stayed in a house for one month for Danish architecture students at Bregneröd, and all together they decorated the place with paintings, sculptures, and poems.

Of course, the fact that they were living in a post-war period with their cities destroyed during WWII made their need for creating meaningful art more vital. So they strived to draw paintings that stated the artists’ opposition to dominant Western ideologies, and often the content of those paintings was inspired by the violent events of the Second World War.

CoBrA’s first major exhibition was held at the Stedelijk Museum in Amsterdam in 1949. It raised much criticism from both the press and the public, and several newspapers described the movement’s art as offensive and provocative. The second large exhibition, which took place just a few months before the group dissolved was held in 1951 in Liège, Belgium. As conflicts among group members had already started before the exhibition, some of the most important CoBrA artists refused to take part and exhibit their artworks in Liège. However, many of them had already built a strong relationship and continued collaborating after the group was dissolved.