How a Farmer's Open Faced-Sandwich Became a National Danish Dish 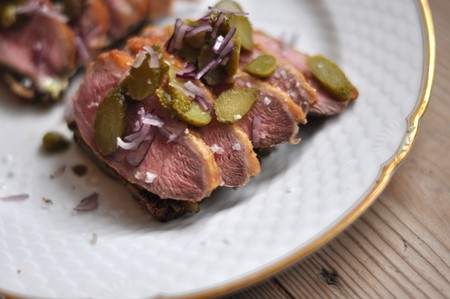 When foreigners find out that one of the most popular Danish-traditional foods is an open faced-sandwich called smørrebrød, they usually wonder what is so special about that delicacy and how it became so known that is now served in restaurants all over Europe. Well, its story begins in the Middle Ages and went through different phases before being served in high-end restaurants. Smørrebrød usually occupies the top of the Danish traditional-dish lists and is undoubtedly locals’ favorite delicacy. Smørrebrød actually means bread and butter and is an open-face sandwich that consists of a slice of rye bread and usually including fish or meat, vegetables, and some kind of sauce such as mayonnaise or the Danish remoulade on top.

A dish now found at a Danish Michelin-starred restaurant and slowly spreading in other countries all over the world, this sandwich has its origins in the Scandinavian countryside. A farmer’s main meal of the 19th century, the idea was simple: leftovers from yesterday’s dinner was put on the top of a bread slice that served as a substitute to a plate. In that way, farmers had a nutritious meal that kept them feeling full during the day.

This habit of using a slice of bread instead of a plate had existed since the Middle Ages, but agricultural workers hadn’t realized that all the flavors from the toppings were making ‘the plate’ the tastiest part of the meal at the time. Once done with the food, they threw the bread away. Several centuries later after realizing that that slice of bread was not only is delicious but also fills their hunger, the idea of smørrebrød was born. 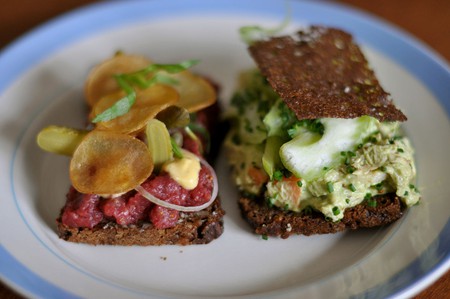 When Oskar and Petra Davidsen opened a wine bar in 1888, they decided to serve the open-face sandwich to their hungry customers. Shortly afterwards, the bar’s habitués were visiting Davidsen’s shop just to taste the delicious dish. Their recipes of 178 variations of smørrebrød passed from generation to generation. When their great granddaughter, Ida Davidsen, took over the family business, she decided to introduce the Danish dish overseas. From British Airways passengers to patrons of Restaurant Scandia in Hollywood, international diners can now get a taste of the traditional-Scandinavian delicacy.

However, the first to officially include smørrebrød on their restaurant’s menu were DIVAN 2 owners Louise and William Nimb, considered experts on the Danish gastronomy scene.

In 1909, 32 years after DIVAN 2 opened, the Nimb family opened Nimb, and the open-face sandwich still held a place on their menu. Nimb was the first restaurant in Tivoli Gardens, and it is now considered one of the best hotels in Copenhagen still serving high-quality food and drinks. 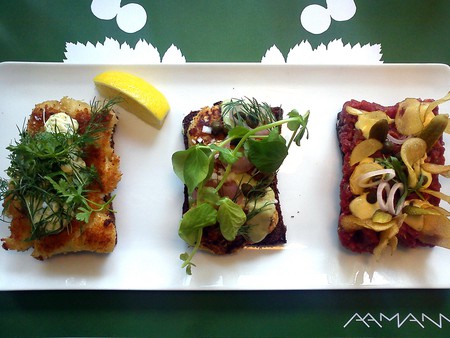 Even though smørrebrød became a part of the Danish-gastronomy scene, it wasn’t as popular as it is nowadays in the early 20th century. However, in 2006, chef Adam Aamann decided to bring it back to the foreground. Since then, restaurants in Denmark serve a wide range of smørrebrød variations. Aamann’s restaurants can be found in various countries such as England, Sweden, and Germany, and all of them offer the real Scandinavian open-faced sandwich.Those traveling to Copenhagen make sure to stop by Restaurant Schønnemann or Øl & Brød to get a taste of the world-renowned Danish dish.

The national dish is never missing from the Christmas or Easter table, but locals don’t need a special occasion to eat their favorite open-face sandwich. They’ll eat it for breakfast, lunch, and dinner every day of the year. Only the toppings vary: on Easter, it’s more usual to eat smørrebrød with fish on top—usually herring—while on Christmas, most Danes prefer to add a piece of the traditionally-roasted pork (æbleflæsk) on the top of a slice of black-rye bread.