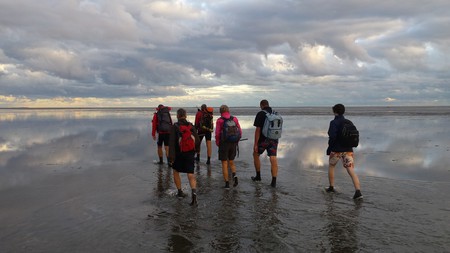 The Danish Wadden Sea is known for being home to seals, fish and millions of migrating birds. But its seabed is also home to million of oysters that travellers can now catch and eat for lunch. Take this unique trip in Denmark’s nature and enjoy a tasty meal while helping to preserve the ecosystem.

The Wadden Sea reaches Denmark in the southwestern part of the country and is considered to be one of the richest ecosystems in the world; according to some biologists it can even be compared to the Amazon rainforest in terms of biological productivity. It stretches across the Netherlands, Germany and Denmark and covers an area of 500 km in total. Its varied ecosystem, consisting of sandbanks, sand dunes, marshland areas and tidal flats, hosts 500 species of plants and animals including millions of migratory birds, fish, invertebrates, blue mussels and other fauna. The Danish Wadden Sea National Park qualified as a UNESCO World Heritage Site in 2014.

Thousands of Pacific oysters in the Danish Wadden Sea’s seabed

Thousands of visitors head to the Wadden Sea National Park every year. Nature enthusiasts swarm the area, not only to witness unique nature phenomena such as the Black Sun but for a unique gastronomy experience as well. The reason is simple; oysters. The area is so filled with Pacific oysters that oyster safaris organised by the Wadden Sea Center and other operators take place from September until springtime. For those who worry for the ecological consequences of the human footprint we have some good news; picking Pacific oysters in the Wadden Sea is actually beneficial for the environment.

When the European flat oyster was infected by a crayfish plague in 1922, its rates were reduced and shortly after the species disappeared. So, in the mid-90s officials decided to import the Pacific oyster – which up until then was found primarily in Japan. The molluscs were first introduced to the Dutch and French territories of the sea, followed by the German counterpart. Drifted away by the sea’s currents, the oysters were observed in the Danish Wadden Sea by 1996, and after multiplying steadily for the past 21 years, they are now causing a problem for other oysters and animals native to the complex ecosystem of the Danish Wadden Sea. 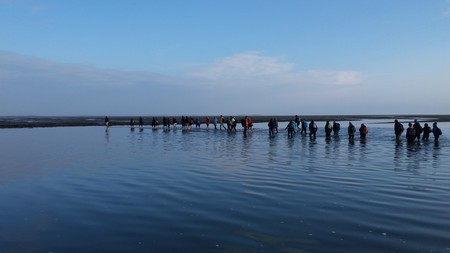 Why worth it taking an oyster safari?

By picking oysters not only will you earn your meal for the day but you’ll also be doing your bit to help the environment, and of course you’ll experience a unique trip in Denmark’s remarkable surroundings. When the tide is low, organised tours can take place for up to five hours – allowing operators and visitors walk along the three-kilometer seabed looking for Pacific oysters that they can collect in their buckets. The process is quite easy but it’s recommended to wear gloves as oysters are quite sharp, and of course don’t forget your waterproof boots.