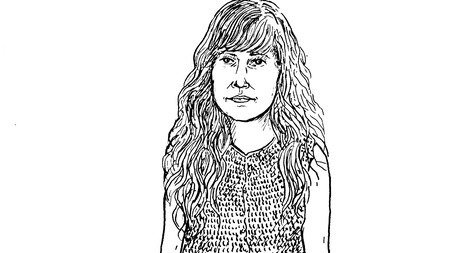 As part of our “20 Literary Translators Under 40” series, we interviewed Danish translator Katrine Øgaard Jensen.

Read: An excerpt from Third-Millennium Heart by Ursula Andkjær Olsen

What are you currently translating?
I just finished translating Ursula Andkjær Olsen’s poetry collection Third-Millennium Heart (forthcoming from Broken Dimanche Press & Action Books in May 2017), which I can best describe as part feminist/motherhood manifesto, part judgment day prophecy about Western civilization and its market mechanisms. The collection earned Olsen the Danish literary award Montanaprisen in 2013 from a judging committee that proclaimed she “possesses one of the wildest and sharpest intellects in Danish contemporary poetry.” Having gained an intimate knowledge of the architecture of Olsen’s poetry through translation, I’m happy to say that I agree with this sentiment. Translating her work has not only been a tremendous challenge—it’s also made me a better writer.

What approach or procedures do you take when translating?
There is a polemic quote by Yevgeny Yevtushenko that goes: “Translation is like a woman. If it is beautiful, it is not faithful. If it is faithful, it is most certainly not beautiful.” I don’t know about the woman part, but I do think there’s some truth to that statement when it comes to literary translation—especially in poetry, which is what I mainly translate. For instance, I often choose to break lines differently in English, when the translated poems invite new possibilities for wordplay, or when I deem an English line too clunky. When I encounter made-up words in the original, I’m only sometimes able to translate these words directly in a not-too-awkward manner. In many cases, I’ll have to create a new or similar image in English.

What kinds of works or regions do you gravitate toward?
As mentioned, I mainly translate poetry, and always from the Danish. Even though I know other languages, I feel that my small home country—with a population of 5.6 million people—can use all the help it can get in translation. In terms of the type of poetry I gravitate toward, I’m particularly interested in work that addresses current political topics through vivid imagery and surreal world building.

Who or what are some untranslated writers or works that you would like to see in English? Why?
The Danish poet Lars Skinnebach has been on my list for quite some time. His work, which exposes egocentric societies and their impact on (human) nature, seems to have influenced many poets of my (only slightly younger) generation. Thankfully, I just received Skinnebach’s permission to translate him into English, and I can’t wait to get started. Other Danish writers and poets I’d love to see translated (more) are Lone Hørslev, Mette Moestrup, Harald Voetmann, and Peter Adolphsen. Just to name a few.

What are some of the more interesting literary developments happening in the language or region you translate from?
A literary development in Scandinavia that I find highly interesting has to do with addressing climate change, the Anthropocene, the notion that nature and humanity have become inseparable. Anne-Marie Mai, an esteemed scholar of Nordic Literature, wrote a brilliant article for Post45 titled Eco-Crime: Scandinavian Literature Takes on the Environmental Crisis in which she describes this literary tendency much better than I could here (or anywhere else).

What is a recent translation challenge you faced?
In Third-Millennium Heart, Olsen references Danish idioms and songs, invents new words, and enjoys the occasional pun. The most difficult part of translating her poetry, however, has to do with her use of voice. The speaker in Third-Millennium Heart is an ambiguous character: abusive, yet a victim; fiercely emotional, yet icy and cynical. A literary scholar recently pointed out that the ambiguity of this speaker is so prevalent that any reading of its intentions could be disproved with an equally well-documented interpretation of the exact opposite statement. This enormous duality is possible in the original language, because Danish grammar allows for multiple ideas to (e)merge—separated by a wet monsoon of commas—within a single sentence. To accommodate this duality in English translation, I chose to replace some commas with line breaks, to entertain the possibility of connections between certain words or lines. In other cases, when a line break would cause more confusion than clarification, I inserted a colon or a period instead.