10 Bars For the Cheapest Beers in Aarhus

Courtesy of Sherlock Holmes Pub | | Courtesy of Sherlock Holmes Pub | © Michael Bang
Tourists in Denmark often step into a bar, look the prices on the drinking menu, convert DKK to their country’s currency, and step out of the bar. Well, Scandinavian countries including Denmark isn’t what you’d call a “top budget destination” but that doesn’t mean that there aren’t exceptions. This article is for those who want to taste a beer and experience Aarhus’ vivid nightlife without breaking the bank.

Bar, Bodega, Beer
With prices starting from 15DKK ($2.37 USD) Bodega Kurts Mor is definitely one of the bars to visit if you don’t want to break the bank on a night out. Opened for the first time in 1996, Aarhus’ cozy bar has been a local hangout for more than 20 years attracting people of all ages and styles.
More Info
Open In Google Maps
7 Fredens Torv, Aarhus C Aarhus, 8000, Denmark
+4586181848
View menu
Visit website
Visit Facebook page
Send an Email
Give us feedback

Bar, Beer, $$$
Mig & Oelsnedkeren | Courtesy of Mig & Oelsnedkeren
Mig & Ølsnedkeren offers a great selection of more than 20 tabs of beer, some of which are produced in their own microbrewery. With so many different styles of beer, no one leaves the place disappointed, not even the most demanding beer enthusiasts. It may not be the cheapest bar in Aarhus, but it has good quality beers at fair prices. Plus, there are always happy hours and special offers.
More Info
Open In Google Maps
12 Mejlgade, Aarhus C Aarhus, 8000, Denmark
+4593855158
View menu
Visit website
Visit Facebook page
Send an Email
Give us feedback

Pub, Beer, Pub Grub
Bodegaen is known for its cold beer and cheap shots, not without reason. A large glass of draft beer costs 25DKK ($3.96 USD) while 10 shots costs just 100DKK ($15.83 USD). The cozy bar that opened approximately seven years ago is located by the river and it’s open everyday until the wee hours. Keep your eyes open for the day’s special offer because there is always one.
More Info
Open In Google Maps
33 Åboulevarden, Aarhus C Aarhus, 8000, Denmark
+4586197727
View menu
Visit website
Visit Facebook page
Send an Email
Give us feedback

Bar, Beer, Pub Grub, $$$
Fatter Eskil, music venue in Aarhus | Courtesy of Fatter Eskil
In 2018 Fatter Eskil will be celebrating its 45 year anniversary as a venue and it still is one of the city’s top choices for those who love music and beer. More than 300 concerts and jam sessions from different kind of music take place annually in the cozy bar, attracting the city’s music aficionados. Even though there is a 40DKK ($6.33 USD) fee for concerts, every Thursday and Friday there is no entrance fee from 4 p.m. to 9 p.m. Those on time to get a stamp at “Fatter Fredagsbar” can enjoy free entrance even after 9 p.m. and beers from 25DKK ($3.96 USD).
More Info
Open In Google Maps
25 Skolegade, Aarhus C Aarhus, 8000, Denmark
+4521354411
View menu
Visit website
Visit Facebook page
Send an Email
Give us feedback

Bar, Beer, Wine, Cocktails, Pub Grub, $$$
Ris Ras Filliongongong, Aarhus | Courtesy of Ris Ras Filliongongong
Ris Ras is a cozy bar located in Aarhus’ hip Latin Quarter. With its rustic decoration, the friendly staff, the good music sometimes coming from bands doing “intimate” gigs, and more than 100 beers on its shelves at low prices, it’s no wonder its a hangout for locals. The stylish bar also attracts a great number of tourists who make sure to have a beer whenever they are in town. This year Ris Ras is among the five final nominees for the prize of the City’s Best (Friday) Beer.
More Info
Open In Google Maps
24 Mejlgade, Aarhus C Aarhus, 8000, Denmark
+4540484180
View menu
Visit website
Visit Facebook page
Send an Email
Give us feedback

Thorkilds has a great variety of beers and prices start from 25DKK ($3.96 USD). The wooden tables, the red wallpaper, and the comfy couches create a warm and cozy atmosphere which in combination with the great prices, have made Thorkilds one of local’s favorite. The city’s night owls make sure to stop by on Fridays and Saturdays for the night’s last beer as the place stays open until five in the morning. 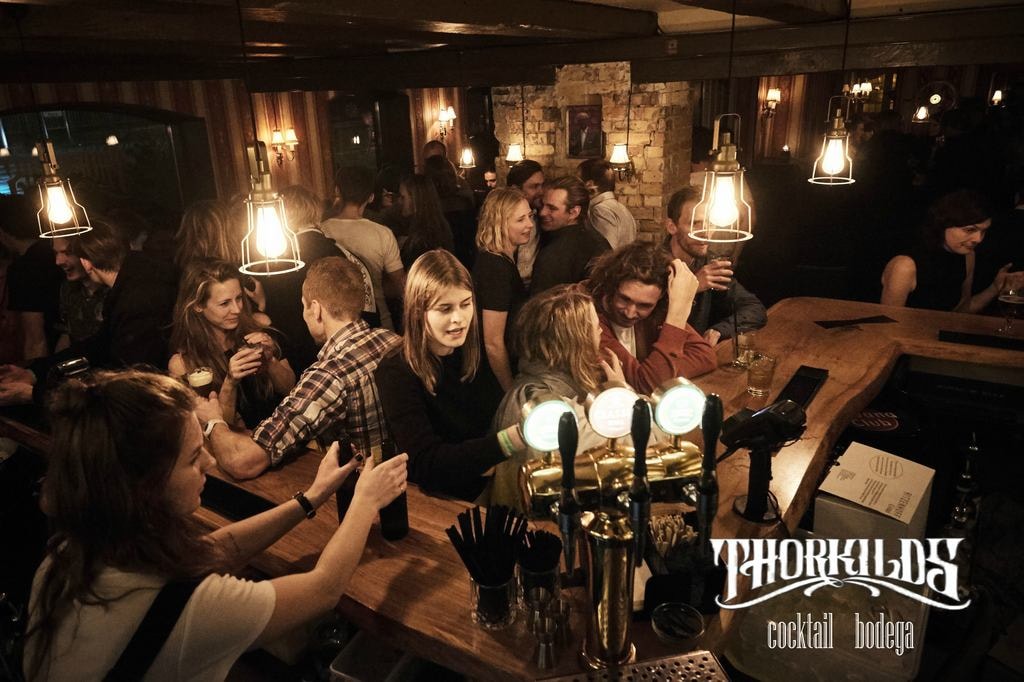 Bar, Beer, Coffee, Pub Grub, $$$
Fairbar is a non-profit café-bar located in Aarhus‘ city center. More than 200 events, such as talks, workshops, and film screenings, as well as music concerts, take place every year. More than 20 kinds of draft and bottled beer are served at Fairbar and the price range is from 20DKK ($3.17USD) to 135DKK ($21.37 USD). The profits from the drinks are used in programs that support the vulnerable people in Myanmar.
More Info
Open In Google Maps
6 Klostertorvet, Aarhus C Aarhus, 8000, Denmark
+4531684466
View menu
Visit website
Visit Facebook page
Send an Email
Give us feedback

Bar, Cafe, Coffee, Beer, $$$
Cafe Guldhornene | Courtesy of Cafe Guldhornene
Festive atmosphere, nice music, and cheap, cold beers are the words that describe Cafe Guldhornene best. With prices starting from 23DKK ($3.64 USD) and special events taking place all year around, it comes as no surprise that the bar is a real favorite among locals who want to finish off their night dancing to the sound of upbeat songs.
More Info
Open In Google Maps
28 Klostergade, Aarhus C Aarhus, 8000, Denmark
+4531737321
View menu
Visit website
Visit Facebook page
Send an Email
Give us feedback

Pub, Beer, Pub Grub, $$$
Sherlock Holmes Pub | Courtesy of Sherlock Holmes Pub | © Michael Bang
Enjoy a glass of cold beer in a traditional English pub in the heart of Aarhus. Sherlock Holmes pub opened in 1992 and ever since, has been serving high-quality whiskey and a great selection of beers to sports enthusiasts who never miss a chance to watch a game in the pub’s big screens and locals who appreciate a good quality drink at low prices.
More Info
Open In Google Maps
76A Frederiksgade, Aarhus C Aarhus, 8000, Denmark
+4586124050
View menu
Visit website
Visit Facebook page
Send an Email
Give us feedback

Bar, Beer, $$$
Offering more than 20 types of beer, Fermentoren is usually the top choice for the city’s beer buffs. From Pilsner and brown ale to beers brewed with dark malts and a dash of blackberry and coffee stout beer, Fermentoren has something for every taste. Prices are not as low as in the city’s bodegas but those who want to taste a special type of beer should definitely stop by the stylish bar.
Looks like it's closed Hours or services may be impacted due to Covid-19
More Info
Open In Google Maps
24 Nørregade, Aarhus, 8000, Denmark
+4561518268
View menu
Visit website
Visit Facebook page
Send an Email
Give us feedback
Give us feedback