Why Is Prague Known as the City of a Hundred Spires? 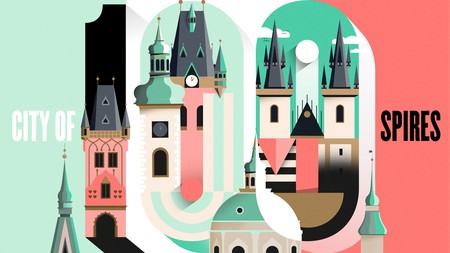 Gazing out across the haze of the Czech capital from the gates of Prague Castle high above the city, it’s not hard to see why Prague acquired the nickname ‘the city of a hundred spires’. But who coined the Czech capital’s favourite moniker, and which spires does it actually refer to?

Atmospheric as the nickname is, it’s incorrect: estimates place the actual number of spires, towers, turrets and steeples in Prague to anything ranging from 500 to over 1,000. However, the name has stuck, and Prague is still sometimes referred to as stověžatá, the compact Czech way of saying ‘sporting 100 spires’.

It was most likely the obscure Austrian historian Josef Hormayr who first penned the phrase, in the early 19th century. It was also around that time that mathematician and philosopher Bernard Bolzano counted Prague’s towers and gave it the nickname. The name stuck, and although Prague is described locally in other ways (most often matka měst – ‘mother of all cities’ – or zlatá Praha – ‘golden Prague’), ‘100-spired’ is the most commonly used.

It’s incredible to think that Hormayr and Bolzano would have looked out across early 19th-century Prague and seen virtually the same medieval city that can still be admired today. In those days, the medieval gates, Baroque belfries and Gothic church spires would have risen even more prominently over Prague, the Czech capital yet to acquire its late-19th-century pomp and Neo-Gothic add-ons.

So just how did Prague’s prickly skyline come to be so well preserved? In the late 19th century, the value of many of the city’s historical structures was recognised, and although many were clumsily renovated in the Neo-Gothic style, they were at least spared demolition. War and communism halted most mid-20th-century additions, and UNESCO arrived just in time, in the early 1990s, to extinguish any plans to ‘develop’ Prague’s city centre. Prague’s towers still lord it over a low-rise historical core, with no high-rise development ever having a hope of gaining planning permission.

Although most of Prague’s towers date from the medieval and Baroque periods, many more have been added since, outside the historic centre. Just before UNESCO stepped onto the scene, the communist authorities hoisted the Žižkov TV Tower into the sky southeast of the historical centre. At 216 metres (709 feet) tall, it’s the highest structure in the capital, dwarfing the steeples of the Old and New Towns. Facing the Žižkov Tower across the city centre is the Petřín Tower, a scaled-down replica of the Eiffel Tower erected by the Czech Hiking Club in 1891.

Other 19th-century additions include Prague’s many water towers, once crucial infrastructure but now finding new lives as museums and galleries. And it seems even Czech people outside Prague are infatuated with the idea of building into the clouds: a national sport is bagging the hundreds of hilltop observation towers around the country, purpose built for the enjoyment of hikers and tourists.

Some of the most notable spires among Prague’s hundreds (or thousands) include the twin steeples of the Church of Our Lady Before Týn in the Old Town, the beautiful Baroque Church of St Nicholas and the Klementium Astronomical Tower. Visitors who manage the climb up through the tower are rewarded with a unique view of Prague’s landmarks from above. It’s the perfect vantage point for trying to count all the spires for yourself.