Beer 101: Where To Enjoy the Best Brews in Prague, the Czech Republic 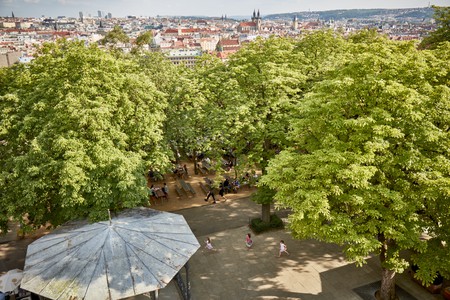 As the capital of the country that consumes the most beer per capita every year, Prague is a beer lover’s dream – filled with atmospheric hospoda taverns, large-scale industrial breweries and cosy brewpubs.

Prague has been a beer powerhouse since the year 993, when the city’s first brewery was founded at Břevnov Monastery. In the thousand years since, hundreds of breweries have come and gone in the Czech capital, with the low point hitting just after the Velvet Revolution of 1989, when the local brewery count dropped into the single digits. Today, the city has about 50 beer makers of various sizes – and that number is rising.

Beyond breweries, Prague is home to thousands of pubs, bars and restaurants, all of which serve delicious draught lagers. The Czech lands gave birth to pilsner, first brewed in the Czech town of Pilsen in 1842. Though many countries now brew beers they call ‘pilsners’, that term is reserved for the originator of the style, Pilsner Urquell, here in its homeland. You’re likely to find Pilsner Urquell and similar golden lagers from other Czech producers everywhere in Prague, as well as the occasional dark lager, another traditional favourite. But it’s not just about the classics: modern craft beer has boomed in recent years, meaning beer enthusiasts can enjoy both traditional and more experimental brews – often in the very same bar.

The first location of what is now a successful chain, block-long Lokál earned its adoring crowds by serving up the freshest Pilsner Urquell in Old Town. Beer here is tapped from large tanks rather than kegs, and the snapshot-friendly speciality pours include the half-foam šnyt and the all-foam mlíko, so named because it resembles milk. Don’t expect quiet: the cavernous beer hall can get very loud, and even the smaller front room is often packed. Don’t miss the excellent, beer-friendly (and meat-heavy) meals on offer.

Yes, the Czech lands gave the world the first pilsner, but the country is also the ancestral home of Budweiser from České Budějovice, a town known as Budweis in German. The main brewery there, Budvar, has been fighting for the legal rights to use the Budweiser name for over a century. This modern pub not far from Prague Castle serves as Budvar’s local flagship, serving the classic South Bohemian lagers along with hearty regional fare, including the traditional brewer’s goulash and dumplings.

Built on a renovated barge anchored near the south end of Štefánikův Most (Štefanik Bridge), ‘The Boat Brewery’ serves both traditional lagers and new-style craft brews, along with a full menu of modern continental cuisine. The cool atmosphere includes great views of the Prague riverfront, and Loď Pivovar’s location near the northeastern edge of Old Town makes for an excellent reward after a long day of sightseeing. Try to get your sea legs: the gentle rocking of the waves might make it seem like you’ve had a pint too many – even before your first sip. 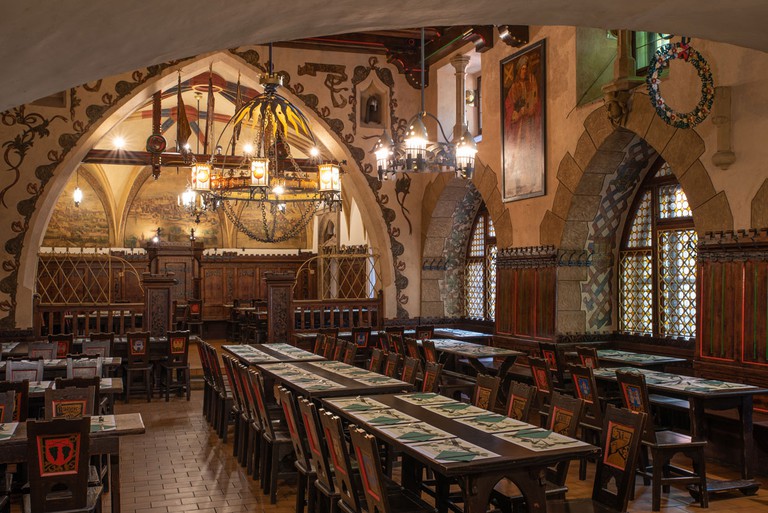 Courtesy of U Fleků

The oldest brewpub in the world may be a bit of a tourist trap, but it’s also a must-see – if you overlook the occasionally surly service (and refuse the shots of liqueur you’ll inevitably be offered), you can have an amazing time at U Fleků. The dark lager, made and sold only here, is a bucket-list item for many beer lovers, and the various historic spaces offer real character. In the Knight’s Hall, built from the ruins of a Gothic chapel, keep an eye out for the door painted with the names of U Fleků brewmasters from 1499 to 1883. 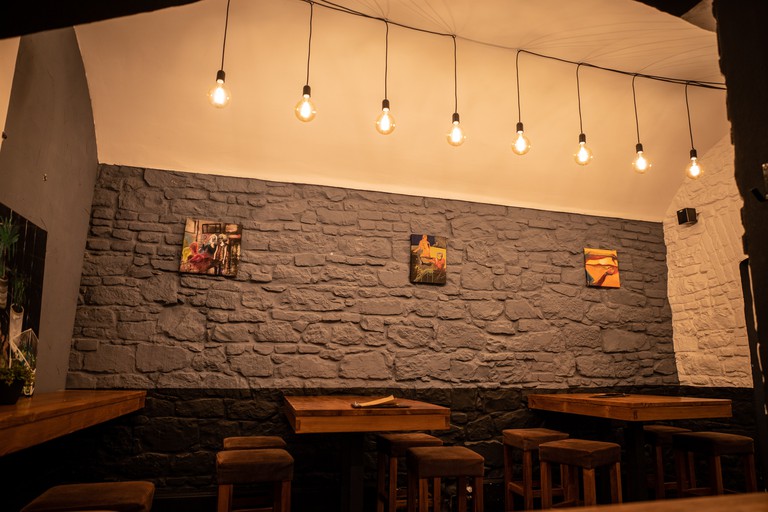 This intimate cellar bar near near the metro and tram station IP Pavlova is run by Jakub Veselý, who also owns the cult craft brewery Pivovar Falkon. “Malý/Velký is the taproom home of Falkon,” Jakub says, “as well as a bar and bottle shop focussed on fresh European craft beer.” In addition to the house brand, look out for rare Czech, Danish, German and Belgian brews on draught, along with cult bottles from around the world. Special events bring in some of the city’s best street food, along with occasional meet-the-brewer sessions. 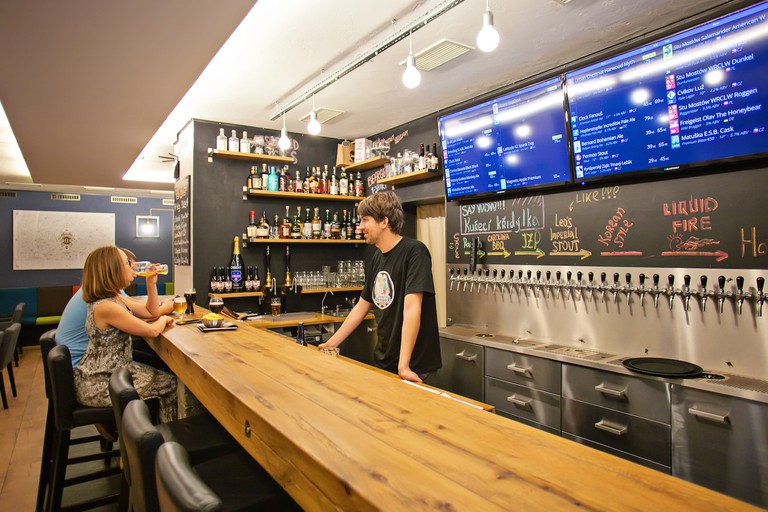 The best of Prague’s new-style craft bars, Vinohrady’s moody BeerGeek Bar offers creative brews from the house brand Sibeeria, which takes its name from co-owner Ruslan Shishmintsev’s home region, as well as other producers. “Our 30 taps are carefully selected for our geeky taste,” Shishmintsev says, “half of which is contemporary Czech craft beer, half of which is foreign, coming from the best brewers around the world.” Expect timeless classics as well as contemporary styles featuring what Shishmintsev acknowledges might be “a nonsensical amount of hops or a crazy fermentation”.

Until recently, the touristic Malá Strana and gritty Smíchov neighbourhoods have lagged behind the rest of Prague in terms of good beer joints. One of the best new places making things right again is this craft beer bar and café, located on a quiet street near where the two districts meet. If you think the atmosphere is more bistro than pub, you’re not wrong: beyond the restaurant-style chairs and large tables, the menu offers marinated ribs and and a pulled pork burger to go with its rotating line-up of unusual Czech, Belgian and other brews. 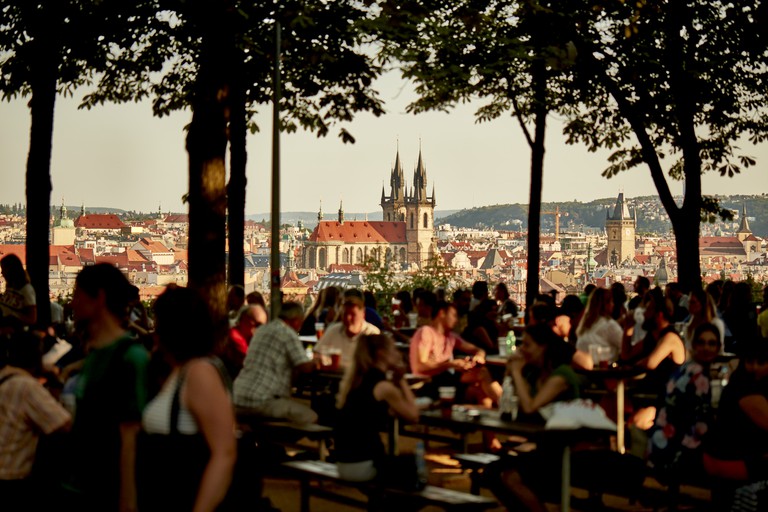 The city’s favourite beer garden offers breathtaking views of the Vltava River, Prague Castle and the rooftops of Old Town from the south end of Letná Park. Get in line at one of the beer kiosks, order a cheap (but delicious) Gambrinus lager in a plastic cup, find a spot at one of the scores of communal tables and join the ongoing party under the chestnut trees. Or, if you’re feeling extra fancy, take a seat at one of the sections closer to the Letná chateau, where you can get full meals, table service and excellent draught Pilsner Urquell served in proper glasses.

When it opened in 2014, this modern brewpub, restaurant and concert venue brought things full circle to a section of the long-vacant Vinohrady Brewery from 1893. Sleek and trendy, the interior feels a bit like an ocean liner – or a spaceship? – thanks to clean hardwood floors and gracefully curved white plaster walls. The excellent Vinohradský beer has become popular at other venues around town, but it’s definitely worth coming here to the source. There’s a full menu of classic Czech dishes, including roast venison and other hearty game dishes in season.

Pivovar Bubeneč is one of Prague’s newest (and smallest) breweries, and is situated in the cosy neighbourhood north of metro station Hradčanská, not far from the aforementioned Budvarka. High ceilings and white brick walls give the main room a modern, urban vibe, as do the IPAs and other contemporary craft brews on tap. The classics here are still treated with respect, however – the excellent food menu includes traditional dishes like the Moravian sparrow pork roll, while the flagship house lager has won multiple prizes as one of the best in Prague.