11 Traditions Only Prague Locals Will Understand 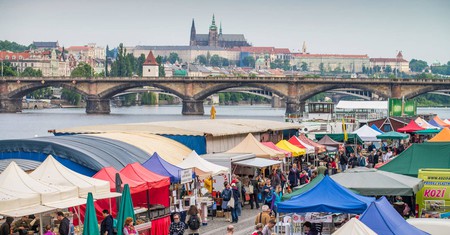 When it comes to customs and traditions, there are some things that only Prague locals will understand | © Ivoha / Alamy Stock Photo

When it comes to traditions in the Czech Republic, there are some things that only a Prague local really knows.

Prague has become one of the world’s hottest tourist destinations and visitors flock from every corner of the world to marvel at the city’s historic castle and enjoy its wild nightlife. However, there are some local traditions in Prague that only those who have spent a lot of time, or lived in the Czech capital, will truly understand.

Enjoying a drink on the river’s edge at Náplavka

Visitors to the Czech Republic may be surprised to learn that the country doesn’t have strict laws about consuming alcohol in public places. In Prague, one of the best places to have a beer with friends on a hot summer’s day is on the banks of the Vltava River. The stretch of pavement known as ‘Náplavka’ comes alive in the warmer months and is a local favourite spot. Grab a drink from one of the bars on the boardwalk, such as bike repair shop-meets-pub Bajkazyl, and sit on the river’s edge dangling your feet over the water. 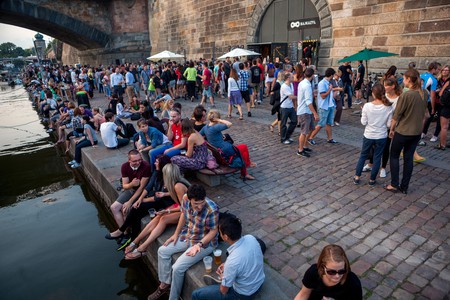 While the traditional witch burning festival Čarodejnice takes place throughout the country, the event at Prague’s Ladronka Park is the biggest in the city and is something that locals look forward to each year. The family-friendly event, held annually on 30 April, involves lots of roasted sausages and beer, live music and a straw witch effigy that is lit on fire to welcome the coming of spring. The origin of the festival is believed to date back to pagan times, but today’s event more closely resembles those of the 17th and 18th centuries, when big fires were lit to ward off evil spirits. Now, the ‘witch burning’ is nothing more than a fun family outing. 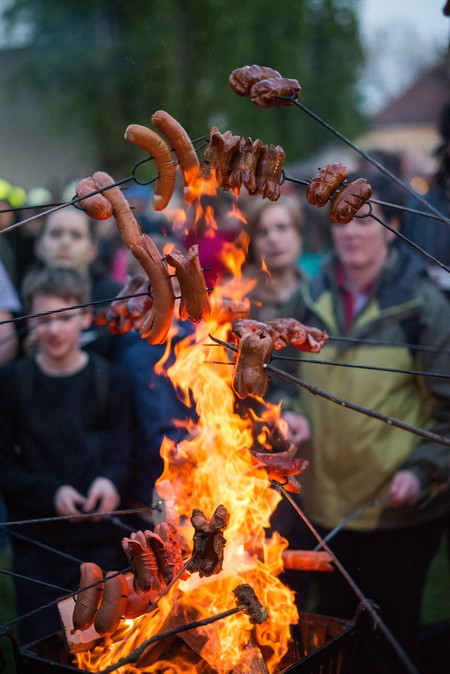 To kick off Lent, the Czech Republic celebrates its own version of Mardi Gras, called Masopust. One of the most exciting parts of the celebration in Prague is the parade that winds through the streets of the Žižkov neighbourhood. Participants wear masks and colourful costumes as they dance and sing their way through the streets, accompanied by larger-than-life floats and puppets. 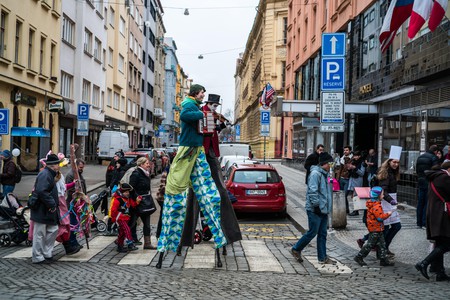 Soak up the views from the Letná Beer Garden

Every Prague local knows that one of the best views of the city can be found at the Letná Beer Garden in Letná Park. Located across the river from the Old Town, this hilltop beer garden provides a stunning panorama of some of Prague’s most famous sights, such as Old Town Square and the Žižkov Television Tower. It’s a popular spot to enjoy a crisp Pilsner with friends in the summer, but the view is breathtaking all year long. 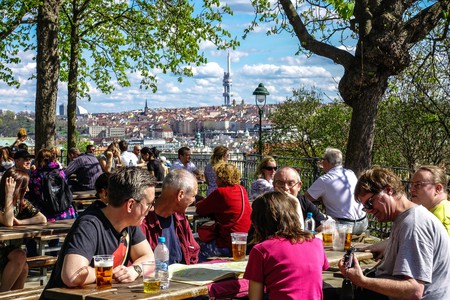 Spending a night out at Stalin

Also in Letná Park, the site where the city’s metronome now sits was once the location of the world’s biggest monument to Joseph Stalin. The statue, featuring Stalin and a line of workers, was the largest group statue in Europe at the time, but it was demolished just seven years later. However, many people in Prague continue to refer to the area where the monument once stood as ‘Stalin’. Now, the small beer stands, loud music and skateboarding have made it the place for cool young Prague locals to hang out with friends on summer evenings. 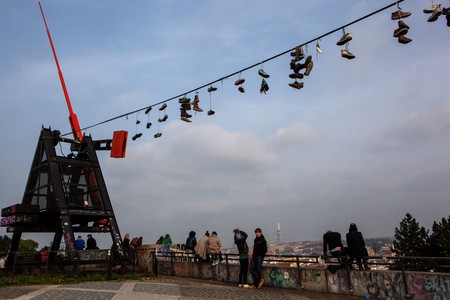 Although it’s been going for only five years, Signal Festival has become a quick favourite with Prague locals. Over four days in October, lighting designers transform some of the city’s most famous landmarks into works of art. The light installations in the streets can be enjoyed by everyone, and the combination of the lights with the historical buildings all around creates an exciting new way to see the city. 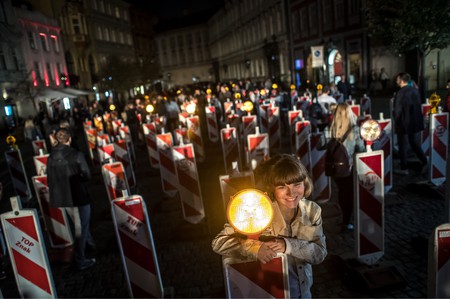 Mandatory Credit: Photo by MARTIN DIVISEK/EPA-EFE/REX/Shutterstock (9928117j) Visitors observe the light installation 'About Being In A Herd' during the Signal Festival in Prague, Czech Republic, 11 October 2018. The festival features international and local artists presenting new technologies and lighting design in the streets of the city through video mapping projections and audio-visual installations. Signal Festival in Prague, Czech Republic - 11 Oct 2018 | © MARTIN DIVISEK/EPA-EFE/REX

While locals generally try to avoid Prague’s tourist-filled Old Town Square, even they have to admit that nowhere else in the city can compete when it comes to Christmas atmosphere. Battling the hordes of visitors for a glass of mulled wine will be worth it when you take in the full splendour of the spectacular Gothic Church of Our Lady before Týn, surrounded by twinkling Christmas lights and small wooden stalls selling unique handmade gifts, honey wine and traditional food. 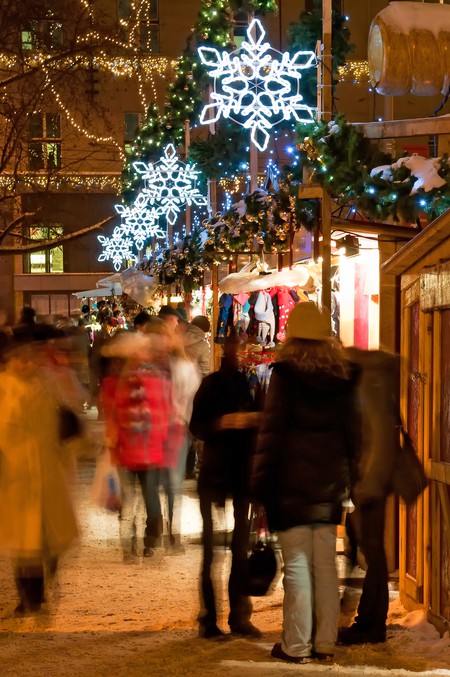 Commemorating Struggle for Freedom and Democracy Day at Národní třída

In both the Czech Republic and Slovakia, 17 November is a public holiday. It commemorates two events: the student demonstration against the Nazis that took place in 1939, and the 1989 demonstration that kicked off the Velvet Revolution. A big festival is held annually in the Národní třída area of Prague to mark these occasions, featuring educational and photo exhibitions, theatre performances, concerts and children’s events. Candles line the street as the people of Prague remember these historic events that took place in their city not so long ago, and recognise those who are continuing to promote democracy and freedom.

Making the trip out to Sapa

Every Prague local knows that the Sapa Vietnamese Market is worth a trip to the outskirts of the city to sample the Czech Republic’s best Vietnamese food. This authentic marketplace, often referred to as ‘Little Hanoi’, is a sizeable complex that gives visitors a glimpse into Vietnamese culture outside of Vietnam.

While there are no maps to help navigate the way around this city within a city, be sure to ask around for restaurant Pho Quynh Anh, which has the best beef pho around, and Hai Phong restaurant, where visitors will find classic Vietnamese fish-based dishes that are nearly impossible to find in central Prague. While it does take some effort to get out here, Sapa’s grocery shops are the best place to go to stock up on your favourite ingredients from Southeast Asia, such as fish sauce, jackfruit and regional spices. 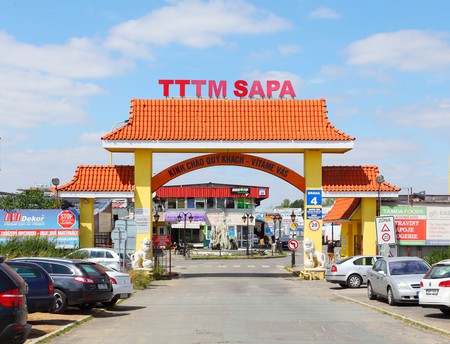 Shopping at the Jiřák Farmers’ Market

Located in Jiřího z Poděbrad square, the Jiřák Farmers’ Market is an excellent place to pick up fresh produce, flowers and handmade treats such as traditional Czech kolaches and a variety of other cakes from local bakeries. Unlike most farmers’ markets, which take place only at the weekends, this one is open from Wednesday to Saturday (although bear in mind that it’s closed in January). As it is open in the week, the market has a more relaxed, local vibe than many of the Saturday-only markets. The square is filled with plenty of benches, making it a perfect spot to sit back and people watch. 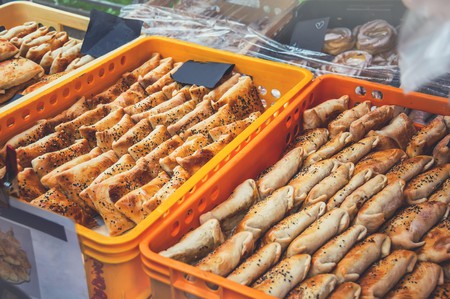 This article is an updated version of a story created by Diana Bocco.