Top 12 Things to See and Do in Olomouc 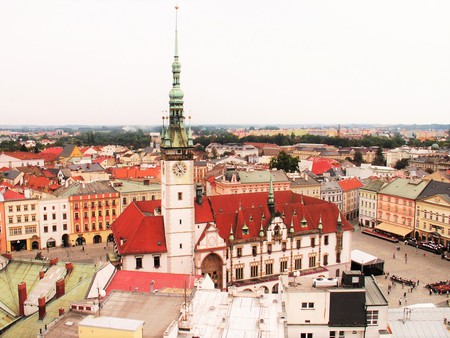 A view over Olomouc II | © Pedro/Flickr

Located in the Moravian region and right on the Morava River, Olomouc is a very old city with much to offer its visitors. From inspiring architecture to beautiful bubbling fountains, Olomouc is a surprisingly majestic city to add to your bucket list!

The Czech Republic is well-known for having some of the most beautiful castles in the world. Olomouc Castle is infamous for being the place where, in the year 1306, Czech King Wenceslaus III was assassinated. The castle itself has undergone many changes and the main buildings that make up the castle complex today are separate units, such as the Bishop’s Palace and St. Wenceslaus Cathedral. While little remains of the original castle, the many historical buildings here are more than worth a visit. 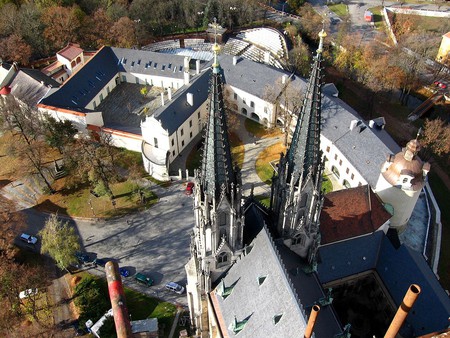 Spend an hour at the Technical Museum

Despite its name, the Technical Museum is more about trains than anything else. Here you can see a mix of diesel, steam and electric engines, including a steam locomotive built especially for the Emperor Ferdinand near the end of the 19th century. During May and June, some of the cars are used for nostalgic tours, offering visitors a chance to experience an authentic steam engine ride.

Walk up the Town Hall tower

Located in the main square, the Town Hall is open to visitors. You can explore the inner courtyard, the ceremonial hall and the Chapel of St. Jerome (which features the oldest ribbed vault of its kind in the country). Walk up the steps of the mid-15th century tower to catch amazing views of the town center, the castle and Olomouc’s other impressive monuments.

Snap a picture of the Astronomical Clock

Located right on a wall recess on the facade of the Town Hall, the clock is decorated with mosaics representing the working class as well as royalty and kings. Although very new compared to other astronomical clocks around the country, this 20th-century clock is still a marvel of mechanics.

See the mausoleum of Yugoslavian soldiers

Although currently closed while waiting for indoor renovations, you can still stop by the Mausoleum to admire its exterior and learn more about its history. Built in 1926 in Bezruč’s Park, this 11-meter-tall chapel and ossuary holds the remains of Yugoslavian soldiers who died during WWI. 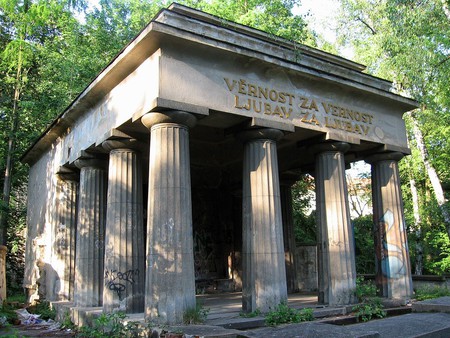 Walk around the Olomouc Fortress

Not much remains of the royal city of Olomouc, but if you know where to look you’ll find a number of ruins, fortifications and ancient gates. A good example is the Olomouc Fortress, located in Bezruč Park. Dating back to the mid-18th century, the circular fortress made it through several battles, including an attack by Prussian troops in 1758.

Stop by the Trinity Column

A UNESCO World Heritage Site, the Holy Trinity Column sits in the city’s main square. Built between 1716 and 1754, the Baroque column is adorned with a number of sculptures, including the Holy Trinity, the Archangel Gabriel and 18 stone sculptures of saints, as well as numerous reliefs. While there, take a peak inside the tiny chapel housed in the column, which features unique relief sculptures – including images of Noah, Jesus’ death and Cain’s offerings. 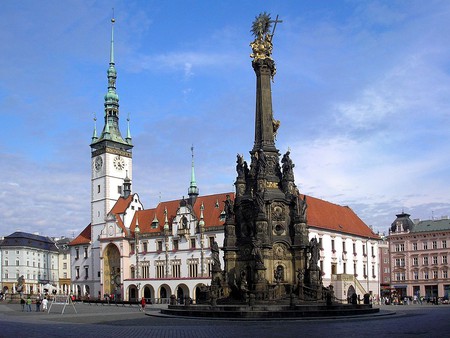 Trinity Column in the center of town | ©Dominik Tefert./ Flickr

Founded in 1107, this is one of the oldest cathedrals in the country. The cathedral also features a 100-meter-tall tower, making the building the fourth tallest in the country. While the original cathedral was designed in the Romanesque style, it was extensively modified and extended in the following two centuries, which resulted in a mix of styles and a heavy influence of Gothic detail.

Catch a show at Kasperle’s Land

A century-old puppet theater, Kasperle’s Land offers mostly classic fairy tales, although the theater troupe also writes their own scripts (and also makes its own puppets).

Olomouc is home to six Baroque fountains. The largest and perhaps most famous is the Caesar Fountain, located in front of the Town Hall. The fountain consists of a rider on top of a rearing horse, flanked by two male figures representing the forces of the nearby rivers, and a dog, which represents the town’s loyalty to the king. Guided tours are provided of the fountains so that tourists can learn more about their history and cultural meaning. 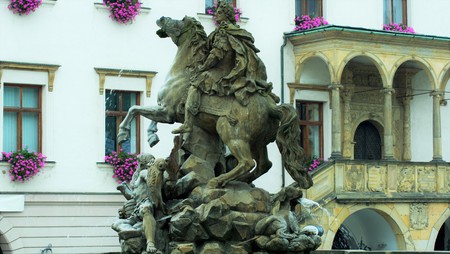 Check out the Regional Museum

A classic museum dating back to the 19th-century, the Regional Museum covers the history and prehistory of the Olomouc area and central Moravia. Permanent collections include archeological relics, antique books, geological and gemstone artifacts, and special audiovisual exhibits about the natural and geographical conditions of the region.

Take a walk through Bezruč Park

One of the several parks in Olomouc, Bezruč Park is a great stop because it’s home to many sights. Aside from a mausoleum and a fortress, the park also contains the Botanical Garden, famous for its Rosarium, which houses more than 10,000 rose bushes.