Top 12 Things to See and Do in Cesky Krumlov 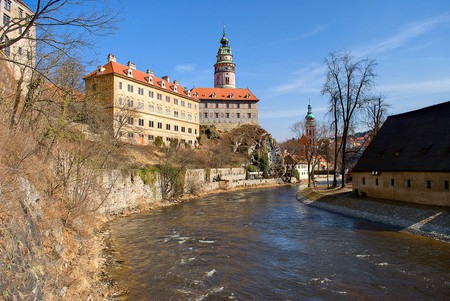 Located in the South Bohemian Region of the Czech Republic, Český Krumlov is a fairy tale town of medieval churches, castles and riverside fun. We take a look at some of the best things to see and do while you are in town.

The second largest castle complex in the country (second to Prague Castle) dates back to 1240. Because the castle kept expanding over the centuries, today it is a fascinating mix of many architectural styles, and includes a large Rococco garden, an 18th-century coach house and an impressive labyrinth of cellars. Visitors can also see the castle fountain, which was originally built in the mid-18th century and rebuilt and modernized a century later.

Český Krumlov’s historic center has been declared a UNESCO World Heritage Site. Walk down the cobblestone streets and along the Vltava River to discover the mix of Gothic, Baroque and Renaissance style buildings.

The festival, which runs for about five weeks starting in mid-July, is the longest-running music festival in the Czech Republic. It is also one of the few festivals in the world that encompasses a wide range of musical genres – from leading soloists and tenors like Placido Domingo to the Czech Philharmonic Orchestra to international figures such as English singer-songwriter Jim Morrison and Maynard Ferguson. 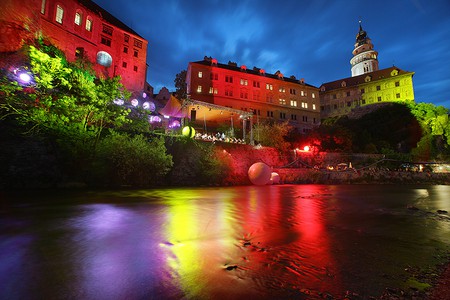 Play in the Vltava

The Vltava river is a wonderful summer playground – and Cesky Krumlov is especially popular for its night rafting. Jump in a raft and follow a trained guide to explore the sights of the town under the moon, or try a water tube for a relaxed afternoon slide down the river. If you prefer something a bit more relaxing, you can take a ride on a wooden raft.

Attend a Performance at the Baroque Theatre

If you’re lucky enough to get a ticket, that is. The theater, located inside Český Krumlov’s castle, is only open to the public twice a year. Built in the 1680s, the theater is one of the very few in the world that still conserves all its original equipment, stage machinery and props, even it’s curtains.

Learn the ins and outs of beer making

Beer brewing has been a big part of Český Krumlov since the 1300s. Once the exclusive drink of royalty and nobility, the Eggenberg brewery has been operating since 1630. A guided tour will show what goes on during the beer brewing process (how things are made, processed and bottled) and will then allow you to taste some original fresh Eggenberg beer.

Stop by the fountain on the Main Square

The fountain was built in 1843 to replace an older version that dated back to the 16th century. Once a main source of drinkable water for the town, the fountain is now a favorite picture spot. Go up the steps, find St. Vitus at the top of the column and then snap a photo with the Baroque buildings serving as background. 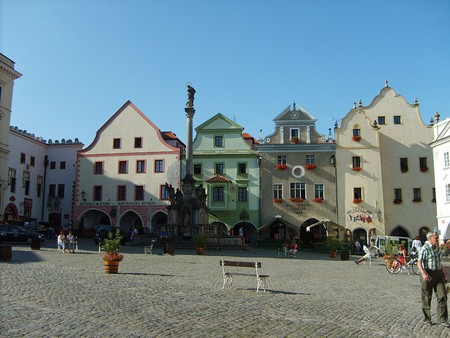 See a mini version of Český Krumlov at the Regional Museum

Museum
Facebook
Email
Twitter
Pinterest
Copy link
Share
Map View
The Regional Museum in Český Krumlov is home to over 22000 items – including Bohemian antiques and archaeological finds – as well as 5000 historical books. The museum’s main attraction, however, is the 1:200 scale ceramic model of the town. Complete with over 800 structures, it includes plenty of details of historic Český Krumlov that are no longer around.
Open In Google Maps
152 Horní, Český Krumlov, Jihočeský kraj, 381 01, Czech Republic
+420380711674
Visit Website
Give us feedback

Step inside the Church of St. Vitus

Church
Facebook
Email
Twitter
Pinterest
Copy link
Share
Map View
One of the oldest Gothic churches in the country preserved in its original state, St. Vitus dates back to the 15th century. The church stands right next to the castle on top of a promontory, watching over the town. Inside, the church features frescoes, a 17th century altar with original paintings and the gravestones of Wilhelm von Rosenberg (a local aristocrat and diplomat) and his third wife Anna Maria.
Open In Google Maps
Kostelní, Český Krumlov, Jihočeský kraj, 381 01, Czech Republic
+420380711336
Visit Website
Give us feedback

Ooh and aah at the Moldavite Museum

Explore an underground mine

Český Krumlov is home to a graphite mine and a rich history of mining everything from graphite to precious metals and minerals. Book a guided tour, gear up with some protective equipment and then head underground to understand what 18th century mining was like and how the “graphite rush” of 1846 shaped the town.

If you can make it to Český Krumlov on the weekend closest to the summer solstice (June 21), you’ll find the town transformed into a medieval wonderland. Craftsmen and musicians bring their tools to the corners of Old Town, while jousters dressed in medieval costumes set the tone for the festivities. Folk theater performances, Middle Age food and fireworks displays add to the fun.