This Czech Church Is Haunted, and Here Are Photos That Prove It 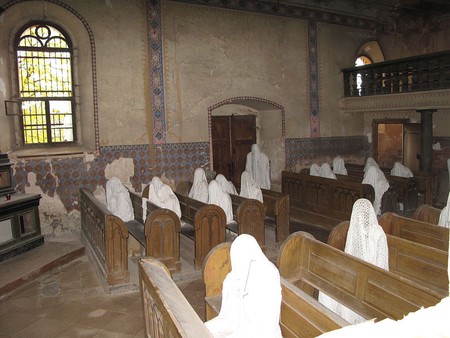 Ghosts are alive in this church | ©Juandev / Wikimedia Commons

While there are many haunted buildings around the world, this Czech Church might be the only one where you are guaranteed to leave with the picture of a ghost.

St. George’s Church in the charming Bohemian town of Luková has been pretty much deserted since the late 1960s. Originally built in the mid 14th-century, the church didn’t have the best of luck and suffered many fires and accidents throughout the years. Even though the rumor was that the church was haunted, it was reconstructed every time it suffered another misfortune – that is, until the final one in 1968.

That year, during a funeral service, part of the roof of the church fell in. Local parishioners decided that enough was enough – the church was boarded and never used again for service.

Under the Communist rule, the church fell into further disrepair. Thieves broke in several times and stole everything from the statues adorning the walls, the clock in the tower, to every single object that could be sold or scrapped. Vandals also spray painted the walls and caused destruction and chaos to both the inside and the outside of the church.

After the end of Communist times, there was a revived interest in rebuilding the church, but lack of funds meant the project was stalled for many years. It wasn’t until 2014 that a local sculpture student, Jakub Hadrava, changed the fate of the church. Hradava was part of a project started by the Ladislav Sutnar Department of Design and Fine Arts, where each art student in a class was supposed to find a dilapidated church for an art installation. Hadrava chose St. George’s and got permission to use it for his art project, as well as permission to keep the church open to visitors throughout the summer and fall. For his installation, he decided to populate St. George’s with plaster ghosts – 30 of them, to be exact – and place them in the church’s pews and aisles.

According to Hadrava, the ghosts are a reminder of the Germans who lived in the area before WWI and were then expelled from Czechoslovakia after the War ended. For some people, they represent the spirit of the parishioners who once loved and cared for the church.

Best scene in Insidious 2 has to be inspired by St. George's abandoned Church in the Czech Republic. It is now a tourist attraction thanks to artist Jakub Hadrava who created statues of ghosts in the pews. #ghost #statues #insidious2 #creepyplaces #jakubhadrava #church #touistattraction #horror #horrormovie #filmlocation

Hadrava’s hard work paid off and word soon spread about the haunted church now permanently inhabited by ghosts. As a result, visitors started to arrive from all over the country and soon from all around Europe. And because visitors started making donations, it was possible to establish a fund to help local authorities and historians begin to repair the church.