The Essential Guide to Prague's Bridges 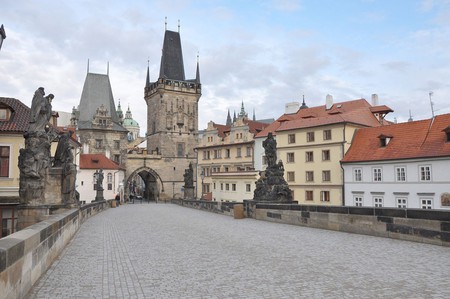 Prague might be known as “the city of the 100 spires,” but this ancient town also has an impressive number of bridges waiting to be discovered. Culture Trip takes a look at some of the best.

Prague’s oldest and most famous bridge no longer allows any kind of vehicular traffic to cross it. Built in the year 1357, Charles Bridge survived several disasters, including a severe flood in the year 1432 and a major battle in the year 1648. It wasn’t until the end of the 17th century that the famous Baroque statues (mostly representing saints) on the bridge were added. The statues you see today aren’t the original ones, those were moved to the National Museum in the 1960s and replaced by replicas. The bridge is guarded by three bridge towers, of which the Gothic Old Town Bridge Tower is certainly the most impressive. Today the bridge is a favorite spot for visitors and a place for artists to sell their wares. 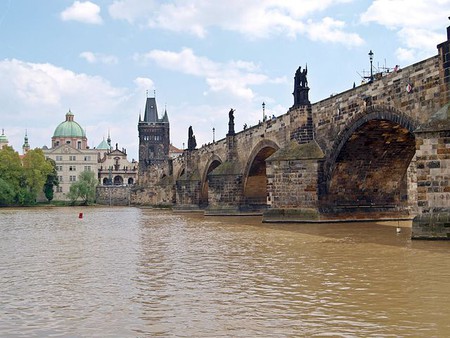 The shortest bridge in Prague (about 169 m/ 554ft long) is made of iron arches and intrinsically carved stone pillars. Čechův is the only Art Nouveau style bridge in Prague and it’s particularly popular because it takes you right into the heart of Prague Jewish Quarter. One of the first things you’ll see as you walk off the bridge is the Old New Synagogue.

This neo Baroque granite bridge near the National Theater also allows access to the tiny Střelecký Island, a popular spot for summer concerts and open air festivals. The island is also home to a movie theater and a cafe. Built between 1899 and 1901, the bridge’s name is an homage to the Czechoslovak Legion, which played an important role in helping Czechoslovakia obtain its independence in 1918.

Located just across from Prague’s darling Dancing House, this bridge was originally built just for trams, but in 1933, cars and pedestrians took over and trams were banned. A modern looking bridge built of reinforced iron and concrete, Jirásek is one of the “plainest” bridges in Prague (it was meant as a transportation bridge), no special statues or ornate decorations were added except for the pylons and obelisks at both ends of the bridge. 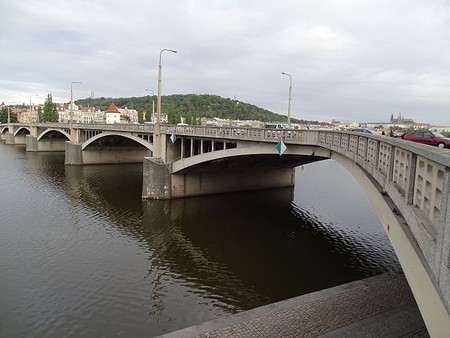 Technically, this early 1900s iron bridge doesn’t have an official name, but it’s known to local as the Vyšehrad Railway Bridge because of the neighborhood it’s located in and the function it plays. This train only bridge also boosts a wide pedestrian walkway on one side, and offers great views of the water and St Peter and Paul Church. 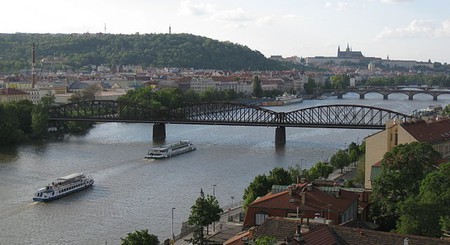 Although not the prettiest bridge in Prague, the 500 meter (1640 ft) Nusle bridge is probably the most important when it comes to transportation. Technically a concrete viaduct, this newish bridge (completed in the 1970s) has six traffic lanes, an underground metro lane and a pedestrian lane. As one of the highest bridges in Prague (40 meters from the ground), it also gained a reputation as the “suicide bridge” and required a modification that made it impossible to climb and access the top.