While most people conduct their public lives following implicit social guidelines, Czech conceptual artist Jiří Kovanda focuses on deliberately challenging these norms. Whether it’s sustained eye contact with a stranger or a blatant shoulder check, Kovanda has been subverting standard social practices through public performances in the Czech Republic since the 1970s. 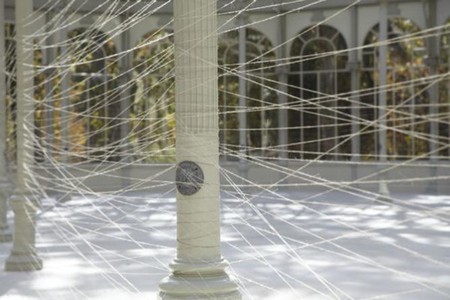 Kovanda began his performances, or ‘actions,’ while living in Prague in the 1970s.Though Kovanda does make tangible visual art, his primary artistic remains his own body, which he uses to create public ‘actions’ that range from the bizarre to the barely noticeable. Oftentimes these actions break social taboos, leading to some uncomfortable situations—turning and staring down the stranger behind him on the escalator,suddenly running away mid-conversation and purposely bumping into people in public. But Kovanda also engages in more subtle if not utterly unremarkable acts, such as the ironically titled Theatre (1976), in which he followed a script of actions in public that appeared deliberately natural and untheatrical.

Kovanda’s most well known and perhaps most replicated act, ‘Kissing Through Glass,’ allows passersby in public to smooch him, albeit on the other side of a window. While the glass suggests a sense of detachment between Kovanda and his kissing partner, it’s clear by people’s reactions that there’s often something going on in that kiss. When Kovanda performed this action at the 2014 Swiss Sculpture Exhibition many kisses from strangers were just a peck followed by a quick, nervous retreat. A few were playful and coy. But some kisses were undeniably sensual as people would let their lips linger on the glass, even coming back for more. One girl even waved goodbye, as if hoping Kovanda will call her back next weekend. As Kovanda explains, ‘It’s about connection—very close but very distant.’

While Kovanda has claimed that his art is not meant to be interpreted as a political statement, the context in which he first began his actions—that is, communist Czechoslovakia—has undeniably influenced his art. ‘It was strange situation in Czech Republic, former Czechoslovakia,’ Kovanda described. ‘People were more…not open. Closed and shy and afraid about contacts.’

Kovanda’s actions were meant to disrupt this withdrawn social atmosphere, to defy societal norms in an often subtle way that didn’t draw too much attention to himself (which is important considering that under Communism, public acts of defiance were banned). Actually, he technically wasn’t even allowed by the government to be an artist given that he had received no formal artistic education—which was fine with Kovanda. He didn’t own nor want a studio, and his actions were often spontaneous, and used nothing more than whatever he had at hand.

Since the ending of Communism, Kovanda has been rediscovered by both local and international art communities. While he continues to perform his famed actions in public and in exhibitions, he doesn’t think they’re ever as good as the first time they’re performed. Rather, Kovanda prefers to work in the moment. ‘My ideas have always appeared out of the blue. They’ve never been the result of some intensive reflection or rational justification,’ he claimed.

Kovanda has moved on from many of his original public performances, and describes his artistic career as having having had four main stages.

Of course, he started with his informal ‘actions’ in the 1970s, and then moved to informal installations, which involved him leaving something behind in public—’traces of my activities.’ In the late 80s, Kovanda began creating collages, and finally, only a few years ago, Kovanda began exhibiting his contemporary art in traditional settings like galleries.

His more recent works, however, remain just as deceivingly commonplace and often tongue-in-cheek as his original actions. Some examples include Treasure (2012)—bags of sand on a shelf, Untitled (2008)—2 kg of sugar arranged in a line, and Car and Cake (2010), which is, well, a miniature car pushing a piece of cake.

Indeed, Kovanda works with the simple and commonplace—with whatever (or whoever) he can get his hands on. In doing so, he explains that his goal is ‘to bring to you these very simple things… To open eyes to these everyday objects, everyday situations, everyday surroundings.’

In other words, Kovanda asks us to pay attention—to be active participants and, perhaps, agitators in the world around us, whether it’s in the middle of the Wenceslas Square in Prague, or on a crowded escalator.