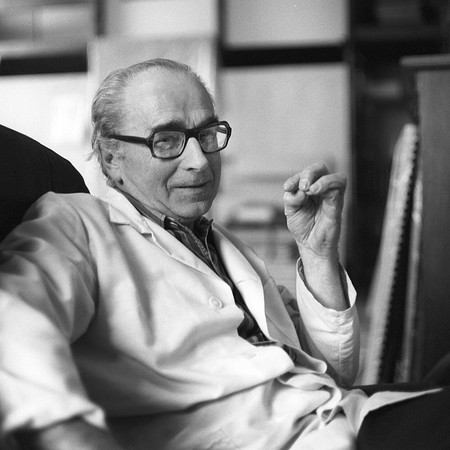 Jiří Kolář is a key artistic and cultural figure in the Czech Republic. Born in 1914, Kolář saw first-hand and was influenced by many of the momentous changes that occurred in Europe during the 20th century. Although full of whimsy, his work contains strong political undertones and spans across many genres and mediums. 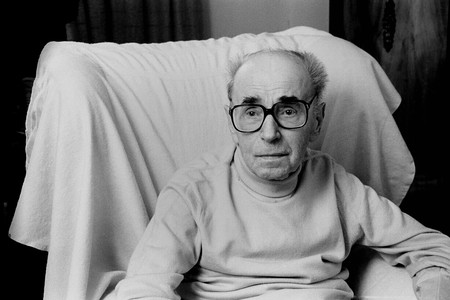 Between the establishment of the Czechoslovak Republic in 1918 and the division of the Czech and Slovak Republics in 1993, Eastern Europe had experienced two World Wars and the oppressive stranglehold of the Eastern Bloc. Jiří Kolář – a prolific Czech poet, artist, and translator – was born in 1914 in Protivín, Czech Republic, and spent much of his formative years in Kladno and Prague. Café Slavia, where Kolář held a permanent table with friend and writer Václav Černý, still sits on the bank of the Vltava in the Praha 1 district. His writings, and later visual art pieces, were vastly experimental in form and pushed the boundaries of modern art. Kolář’s first exhibition in 1937 showed collages and mixed media sculptures, which worked to disrupt the field of vision. His work adopted ‘Rollage’ techniques, which playfully married vertical slices of reproductions of old master paintings with torn pieces of magazine and everyday objects.

Kolář’s first published collection of verse, Křestní list (Birth Certificate, 1941), demonstrated elements of the existentialist musings of Skupina 42, a Czech poetry collective which emerged in the late 1930s. Skupina 42’s work explored the existential impulse of a working class homogenized by the monotony of everyday routines; they borrowed from Heideggerian philosophy, the magical realism of the burgeoning Surrealism and Avant-Garde movements to critique the repressive Communist regime. Kolář produced around ten anthologies of his writings, and his poetic works are commonly considered to be his greatest contribution to Czech culture. In 1953 authorities discovered Kolář’s manuscript of Prométheova Játra (Promethetus’ Liver, 1950) in the house of Václav Černý, a fellow member of Skupina 42, and the poet was consequently imprisoned for nine months.

Kolář’s verse often presents existential meditations on Heideggerian problematisations of ‘semblant truth’ or the ‘illusion’ of truth. In Prométheova játra Kolář writes, “love by purity/ truth by obviousness/ sorrow by genuineness/ that when you ask after man/ you must ask after mystery/ that when you look at yourself/ you see nothing,” (The Czech Reader, 2010).

This quote can be seen to relate to Heidegger’s thoughts in Being and Time (1927), where he finds causality between the bypassing of philosophical questions such as “the meaning of being,” and false attribution of ‘obviousness’ to what he terms as “untruths.”

After 1953 Kolář migrated away from writing and began to focus on the visual arts: ‘poetry of silence.’ This divergence marked a period of a more necessarily insidious defiance of rigorous Communist control over art and literature. The artist’s adoption of less figurative art forms outlined a canny strategizing, such as in his Lady with an Ermine (1966) and Breakfast in a Cow (1967), which whimsically re-worked Da Vinci’s painting of the same name (1489), and Manet’s Le Déjeuner sur l’Herbe (Breakfast on the Grass, 1862).

These works showcase his predisposition for visual jokes and his kaleidoscopic handle of visual motif and repetition. The artist describes his attempt to provoke a heightened sense of perception and consciousness from the viewer through layering, pleating, crumpling and cutaways to toy with depth and dimension. Kolář – whose works sit in conversation with his Cubism-inspired Dadaist predecessors Raoul Hausmann, Man Ray, Hannah Höch, Kurt Schwitters and Max Ernst – similarly eschewed conventional aesthetic values. He created collages underscored with abstraction and narrative nonsensicality in defiance of a society enrobed in dangerous dominant discourses, which had engendered the travesties of World War I. Kolář’s collages riled against Socialist Realism, whose doctrines condemned non-representative forms of art. Later known as the Zhdanov Doctrine, this vehicle of censorship imposed by Soviet authorities was a tense web of prohibitions that strove to sculpt Czechoslovakian art and literature into shining billboards of Communist ideology.

In Kolář’s work, methods of distortion and distress effect a disruption of the plane. In Venuše (1968), the artist adopts precise regularity to slice and replicate Boticelli’s Venus, appropriating his favoured motif of the Renaissance female nude (he returns to this again in his re-figuring of Gabrielle d’Estrées et une de ses Sœurs, 1594). Similarly, in Oro Olimpico (Olympic Gold, 1972), Kolář splices one of Italian Romanticist Francesco Hayez’s sensual nudes, Ruth (1835), with a photograph of an Olympic high jumper.

Whilst Kolář’s Dadaist influences might posit a resistance to interpretation, the artist’s selection of images is far from arbitrary. In Oro Olimpico, the ‘gold’ medal being won in the black and white photo becomes thematically linked to the warm amber tones of Hayez’s wheat field. These collaged works additionally belie a sinister sense of metamorphosis: an unnerving changing and assimilating of perception without us realising. Equally, these respective images of iconic sporting prowess, religion, innocence and beguiling beauty are mashed together in a symphony of human achievement and experience. In all of his works, we get the sense that Kolář is both revering the human condition, but through scrap-book joviality, is also reminding us not to take ourselves too seriously.

In the 1960s, when Czechoslovakia belatedly entered a period of de-Stalinization behind the rest of the CEEC, Kolář enjoyed limited freedom to explore experimental art forms. However, the failure of the Prague Spring in 1968 – the quashing of First Secretary Alexander Dubček’s attempted political liberalization by Soviet Union and Warsaw Pact members – shunted his work again into the prohibited realms of “anti-Soviet” art. In 1977, Kolář signed Charter 77 – a declaration demanding the acknowledgement of international human rights agreements by Communist authorities and which collected over 800 signatures – and immigrated to Berlin. Kolář later resided in Paris and exhibited globally; these filigree scraps of torn magazine acting as tokens of resistance against the grand narrative of creative oppression in 20th Century Czechoslovakia.