Those interested in winter sports and World War II history will certainly be drawn to Liberec, Czech Republic. In addition, there is a formidable culinary scene – we check out the 10 best restaurants in the city. 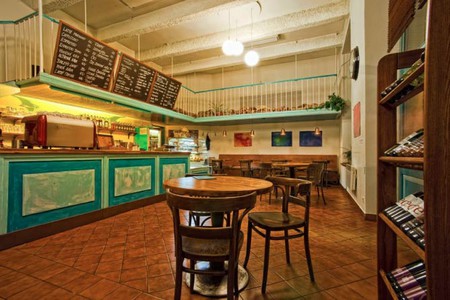 The name Kavárna bez konceptů translates to ‘coffee shop without concepts’. If that’s so, then perhaps no coffee shop should ever have a concept. It’s a little oasis of peace and calm in an already laid-back city. If you sit there for long enough and enjoy your coffee, sandwich or cake, you’ll see people from all walks of life come through. There is often families with young children, high-schoolers with friends, old men with their dogs, skiers on their way back from a day-trip. The cafe also constantly changes the artwork on their walls, giving local artists a chance to exhibit their work. Plus, it’s generally agreed that they have the best coffee in the city. If the Husova location is full, have no fear. They have their ‘student cafe’ just up the road on the university campus. 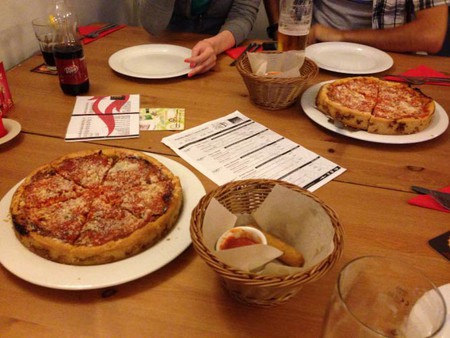 Come November, American expats go looking far and wide for ways to make their Thanksgiving dinner even a shadow of what it would be at home. Those who can get to Liberec have no such problems, and not just at Thanksgiving. Chicago Grill’s native Chicagoan owner takes extreme pains throughout the year to find the best and most authentic ingredients from across Europe. The result is fantastic burgers, fajitas, ribs and turkey dinners. The lunch specials, burgers and cheesecake flavors are always changing and evolving. You never know what exactly to expect, but you can trust that it will be delicious. 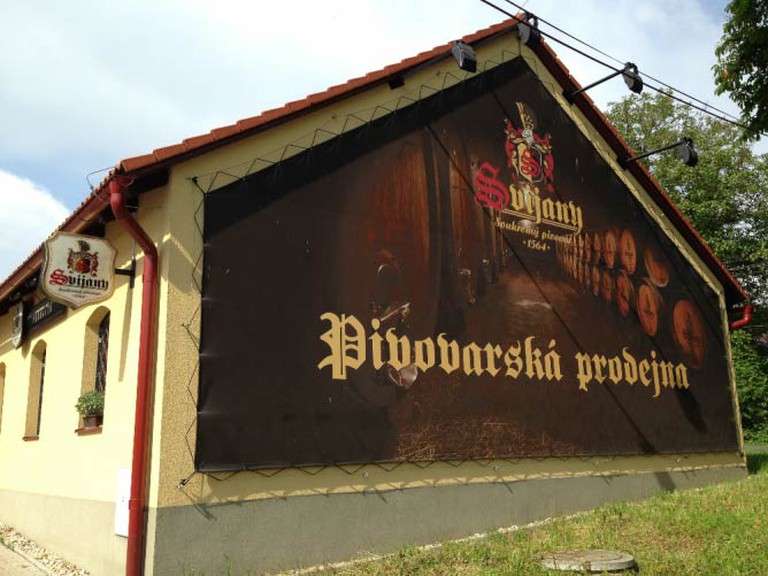 At the Svijany brewery | © Lani Seelinger
Plaudit recently moved from their location exactly in the center of town to a place slightly more out of the way. With the move came a much bigger, more open space, including plenty of outdoor dining opportunities on one of their multiple patios. Plaudit has two main draws – the pizza, and the Pilsner beer that comes directly from a tank in the restaurant. While you won’t have many choices to make about the beer, the pizza menu is almost overwhelming in its options. They’ve got something for every taste, with numerous veggie pizzas, plenty of choices for meat lovers and even several options with a sour cream base. If there’s a particular game you want to watch, Plaudit also has big screen TVs and they do take requests.

You could scour the country and you still wouldn’t find a more typically Czech place than Svijanská hospůdka u Lva. All the beer choices come from Svijany, the local (and much loved, even throughout the country) brewery. This is one of the few places besides the brewery itself where visitors can choose between the different varieties of Svjiany. Secondly, the menu has all possible Czech options, from Czech goulash to beef with a cream sauce and beef tartar. Have a Svijany and enjoy the kitsch around you and the company of old Czech men. These men have been coming for a quiet drink every week for the last 30 years.

It is probably already clear that Liberec’s options are not limited to Czech pubs. But when Masa Buka řecká taverna opened, it still managed to fill a gap. The white and blue tiled interior makes visitors feel like they’ve just stepped onto a Greek isle and the food will only intensify that feeling. They have all the Greek favorites, like tzatziki and hummus for appetizers, fresh seafood, moussaka, lamb and pasta dishes, in addition to a great wine list. Want to go a little bit further? Try the traditional Greek ouzo. In addition to this, Masa Buka does what most Czech places do not yet do by giving every table a complimentary basket of bread and olive paste.

Restaurant, German, European, Czech
Facebook
Email
Twitter
Pinterest
Copy link
Share
The Ještěd Tower is a Liberec institution and the food at the restaurant is famously delicious. Czechs across the country see the tower as the symbol of Liberec. Liberecians really embrace it, to the point of pushing to have it included on the UNESCO World Heritage list. It’s up at the top of the Ještěd mountain. The shape of the tower continues the shape of the mountain, making for a striking silhouette. Once you’ve taken the ski lift, hiked, or driven up to the top, you’ll be treated to an amazing 360-degree view of Liberec. You can also see the surrounding countryside – which is Czech, Polish, or German, depending on which way you look. Retro fans will love the interior, and the ever-changing Czech food choices won’t leave you hungry. 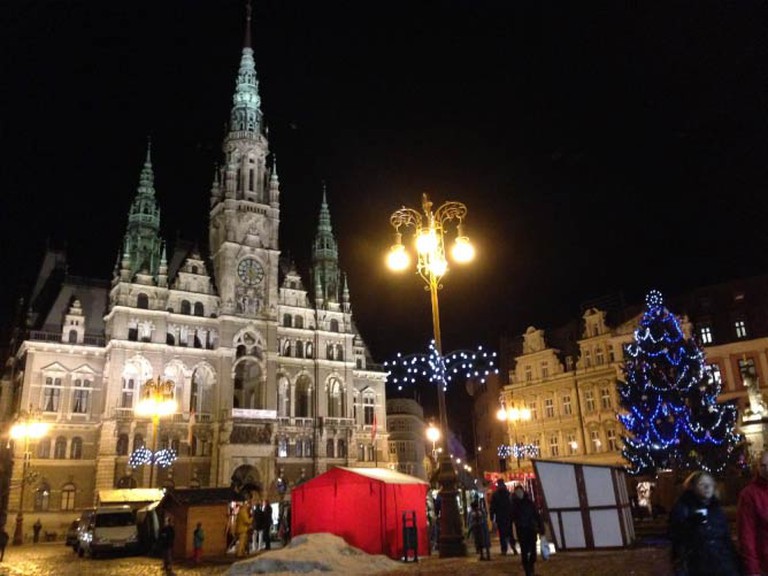 Town Hall at Christmas | © Lani Seelinger
This Irish restaurant opened in 2012, after a Czech pub with the same name in the Czech language closed at the location. Ever since then it’s been a favorite for people in the city hoping for a sophisticated night. Every menu comes as a sealed envelope, like a special card for whoever has the good fortune to open it. They have very authentic Irish food, like seafood chowder and bread pudding. Additionally, they introduce new specials continuously. Black Horse is a little more expensive than your average Liberec restaurant. However, it also offers a warm, cozy atmosphere with Irish folk music flowing through the rooms and remains one of the only bars in the city with Guinness on tap.

When Restaurace radniční sklípek opened just at the end of 2014, it was an immediate hit. The name translates to Town Hall Cellar, which is exactly what it is. The town hall, in addition to being at the center of the city, is a very impressive building and another symbol of Czech pride. Next, it was the Svijany brewery that bought the space and it is now the only place besides the brewery itself where visitors can get Svijany’s beloved brews straight from the tank. Add to this the decor, which is a perfect mix of old Czech pub and fancy downtown establishment, and you have the perfect beer hall. 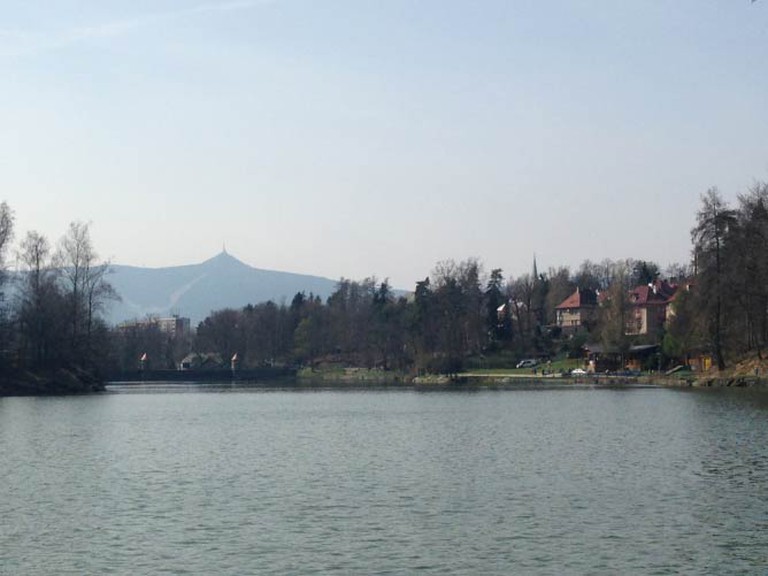 The Liberec Reservoir (the restaurant is on the waterline on the right of the photo) | © Lani Seelinger
Stepping into Balada feels like entering an alpine ski lodge, especially on one of Liberec’s many snowy days. The old wooden beams and ski paraphernalia hung up on the walls creates a cozy atmosphere that the huge selection of Czech and European food only enhances. One particular recommendation is the Czech garlic soup, which is an ideal way to give your body some warmth and nourishment during the long winter. There’s also the potato pancake with meat, which leaves you full in the best possible way. Another great one is the halušky, or small potato gnocchi, a Slovak specialty that can be hard to find in the Czech Republic. Here, it is prepared with cabbage and sausage. And don’t forget to have a pint of Svijany, the beer produced in a village just outside Liberec.

When the weather’s nice, all of Liberec is outside. One feature of the city is its reservoir, next to which is Restaurace na Liberecké přehradě, where much of the city gathers on sunny days throughout the year. The food is what you can expect to find at a sporting event. Think sausages, fried langoš, or the Czech vegetarian favorite, fried cheese – but you’re not there just for the food. Instead, soak up the laid-back spirit of the town in a gorgeous setting, with the sun shining on your back.