An Introduction to Prague's Jazz Scene in 12 Artists 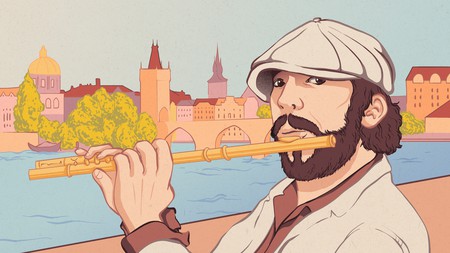 Jazz has long since been at the heart of Prague’s music scene, thriving behind the scenes even in times of turmoil for the city. In modern Prague, jazz is as lively and soulful as it has ever been, thanks to the legends who passed on their legacy and the next generation of musicians who have happily embraced it.

Jaroslav Ježek was a jazz musician and composer who flourished in pre-war Czechoslovakia. While his earliest works leaned toward the classical genre, he later found his own modern sound. Throughout his career, Ježek made compositions for the performances he conducted and wrote music that people could dance to, with his own arrangements of popular jazz compositions like ‘Tiger Rag’ and ‘My Chinatown’ becoming huge hits. He even worked with comedy legends Voskovec and Werich, even after he was forced to leave the country during the Nazi occupation, and sought refuge in New York, where he taught piano and served as a chorus director.

Karel Krautgartner was a saxophonist and clarinettist who became a central figure in Prague’s jazz scene. Born in Moravia in 1922, he moved to Brno as a young man and became entranced with the jazz played on the radio, which inspired him to turn his musical skills to the genre. Krautgartner performed several times at Reduta along with the band he had formed, the Karel Krautgartner Quintet. Playing all kinds of music, from modern jazz to swing, including Krautgartner’s own compositions, the band often accompanied singers and drew in massive crowds. In 1960 he led the Dance Orchestra of Czechoslovakia Radio (Taneční orchestr Československého rozhlasu) which was later renamed Karel Krautgartner Orchestra in his honour.

Karel Velebný was known as something of a jazz prodigy – a talented pianist and saxophonist from a young age, he became a member of the Karel Krautgartner Quintet in his 20s. As he blossomed musically, he began creating his own compositions, which would eventually become important and influential contributions to the Czech jazz scene. In 1961, Velebný co-founded the Spejbl + Hurvínek Quartet/Quintet (SHQ), arguably the most popular combo in Czech jazz history. His role in the SHQ was multifaceted, as he was composer and conductor, played multiple instruments and mentored the younger members. While his music might have a tinge of inspiration from bebop, a form of jazz developed in the 1940s in the USA, it was an entirely new style with no precedent on the Prague jazz scene at the time.

Jiří Stívin is well known in the Czech Republic as a composer and jazz performer. Playing as a flautist and alto saxophonist along with Karel Velebný in the SHQ, he produced some of the most masterful jazz performances that the country has ever heard. Stívin is unmistakably one of the best jazz players in the Czech Republic today. He is best known for his incredible skills of improvisation, exploring different territories and drawing on musical genres other than jazz. Status Quo Vadis and Výlety are among his most notable albums, demonstrating the creative prowess that continues to light up Prague’s jazz scene today.

Dubbed the first lady of Czech jazz, Průchová was born in Slovakia to Czech parents. Her first encounter with jazz happened shortly after World War II, when she watched the Elit Club perform at the Film Harvest Festival. Little did she know that one of the musicians who played there that day – Jan Hammer Sr – would later become her husband. He was also the one to persuade Průchová to join the band. In her lifetime, Průchová performed with the most illustrious musicians in Czech jazz. Like many artists during the Communist regime, she was prohibited from making new music, as it was deemed too American. As a consequence, she left just a few records as a mark of her enormous influence on the world of jazz.

Jazz pianist Emil Viklický also began his career as a member of the SHQ, joining in 1974, a few years after graduating university. He became a part of the group in 1974. That year, he also received an award for the best soloist in a Czech jazz fest, just the first of many accolades he has received for his skilful playing. Viklický soon gained the attention of foreign audiences for his synthesis of modern jazz’s expressive elements. While he produced songs as upbeat as ‘Trochu Funky’, his music usually took on sombre tones, such as his album Homage to Joan Miró.

Eva Olmerová, one of the greatest jazz singers that the Czech Republic has ever known, had a rough start to her career. Arrested at 17 for her family’s political activities, and later sent to prison for attacking a policeman, she began singing in the bars of Prague. Her rise to fame was cut short in 1962 when she was barred from taking a position at the Semafor Theatre, or performing in public at all, after an anonymous letter exposed her past. Towards the end of 1963, the ban was finally lifted, and she was allowed to pursue a career in music. Olmerová debuted with The Jazz Feeling, which the SHQ and Karel Velebný helped create. From then on, she would continue to entrance the world through her songs until her death in 1993.

Milan Svoboda is a world-renowned jazz musician and composer, born and educated in Prague. He has led bands and orchestras since the mid-1970s, and now acts as the leader and namesake of the Milan Svoboda Quartet. Their style is founded on modern jazz, with hints of rock and folk music, as well as contemporary classical music, with compositions laced into longer theme-based suites to leave room for creative improvisation. Although they tour internationally, they are primarily based in Prague and going to one of their concerts can be a unique activity to do during your visit to the city.

Czech jazz guitarist Rudolf Dašek rose to fame when he performed as a guest soloist in Karel Velebný’s SHQ band. While studying at the Prague Conservatory, he founded and performed in a jazz trio with one of his fellow members, including jazz bassist and alto saxophonist George Mraz. Dašek also performed with Ladislav Déczi’s band, Jazz Cellula and the Prague Radio Symphony Orchestra.

Prague-born saxophonist Štěpán Markovič started playing when he was only 15. Although he was initially committed to jazz-rock, his inclination towards jazz improvisation grew stronger over the years, Throughout his career, Markovič has played with some of the best jazz musicians in Prague and in the world. However, his most famous performance was not with a professional musician at all, but with a president. On a trip to Prague in 1994, former US president Bill Clinton was given the gift of a Czech saxophone on a visit to the Reduta Jazz Club, one of Prague’s most famous live-music venues, and Markovič accompanied his playing.

Award-winning guitarist David Dorůžka has been part of the jazz scene since he was 14 years old. He represents a new wave of jazz artists in Prague. In his music, he steers clear of furious riffs, favouring more spacious sounds. From 1999 to 2002, Dorůžka studied composition and improvisation at Berklee College of Music under the tutelage of famous musicians such as Joe Lovano, Mick Goodrick and George Garzone. Dorůžka recorded his first album, Hidden Paths, in New York. Now back in Prague, Dorůžka has been making music and performing with his trio. Their album, Autumn Tales, was named the Best Czech Album of 2016 in the jazz category.

New York-based Ondřej Pivec has never strayed far from his roots, which lie firmly in the Czech contemporary jazz scene. He performs on the Hammond organ and moved to New York in 2009, proving that Czech jazz has a place in the international scene. In his home country, he mostly shares the stage with the band Ondřej Pivec Organic Quartet, performing with a band called Kennedy Administration when he is in the USA. Pivec has crossed genres to collaborated with artists as famous and diverse as the Wu-Tang Clan and Andra Day.