Even if you’re unfamiliar with Czech artist Alphonse Mucha’s name, it’s almost certain that you’ll recognize his works. His rich color palette, curvilinear forms, and floral details permeated 20th century culture – from stained glass windows and theater advertisements to biscuit box and beverage labels that are still used today. We take a closer look at the artist’s life and work. 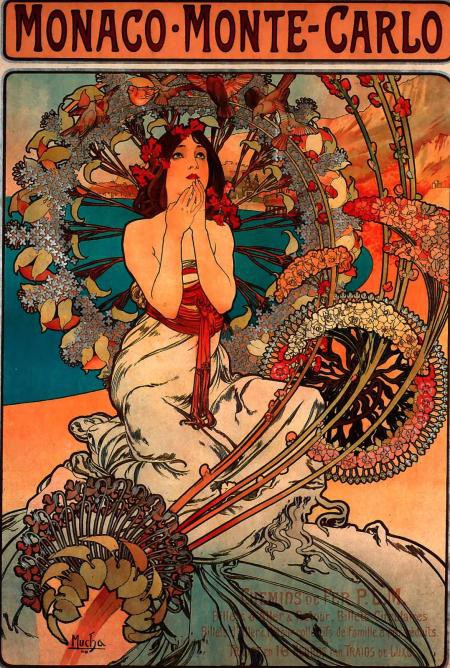 Mucha was born on July 24th, 1860 in Ivančice – a town in the Moravian region of what is today the Czech Republic. The Czech National Revival movement, which encouraged the revitalization of Czech culture and national identity, was at its peak and would have a profound effect upon the young Mucha, later redirecting his career and manifesting itself in much of his works. After being expelled from school for his poor academic performance, he vowed to become a professional artist and became involved in design work for local magazines and theater companies, moving to Vienna in 1879 where he continued these artistic pursuits.

After his sketches came to the attention of Count Karl Khuen-Belasi, Mucha earned his first commissions and used his income to fund formal art training, first in Munich and then in Paris. It was in 1894, whilst producing sketches for both French and Czech publications in between his studies, that the serendipitous occasion, which was to propel Mucha to fame, occurred. He one day obliviously entered a Parisian print shop to find the frantic store owner in desperate need of an advertorial poster for Sarah Bernhardt’s forthcoming play, Gismonda. Bernhardt was at the time Paris’s most famous theatre actress. It was thus extremely brave of the young Mucha to volunteer his services.

He swiftly produced a long, narrow poster of delicate, pastel hues, which illustrated Bernhardt in intricately patterned neo-classical robes and an impressive violet headdress. It was dramatically different from previous, somewhat garish poster designs. Sophisticated, feminine, and subtly sensual, the advertisement received remarkable attention – so much so that the French public would take to the Parisian streets after dark to razor his posters down in order to own a copy. Mucha subsequently signed a six-year contract with Bernhardt, which would have him designing not only posters but also stage sets and costumes for the actress as well. 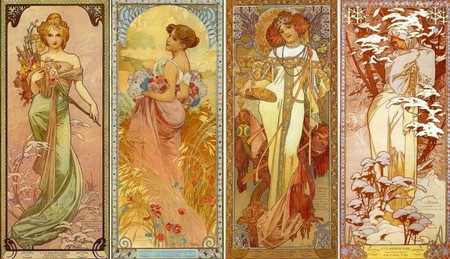 A plethora of commissions followed – decorative panels, cigarette commercials, exhibition posters – all of which echoed his legendary Gismonda poster. His designs, composed from a pastel color palette, virtually always featured ethereal, nymph-like women swathed in elegant, flowing garments, and immersed in sinuous floral patterns. These came to be featured on menus and calendars as well as in fashion and household items, launching the Czech artist into international stardom. Refreshingly different, Mucha’s work was hailed as Art Nouveau, or ‘New Art.’ He had unintentionally pioneered a significant artistic movement with which his name has become practically synonymous – not that Mucha was particularly fond of this label, nor was he pleased with the commercial nature with which his oeuvre was being used. 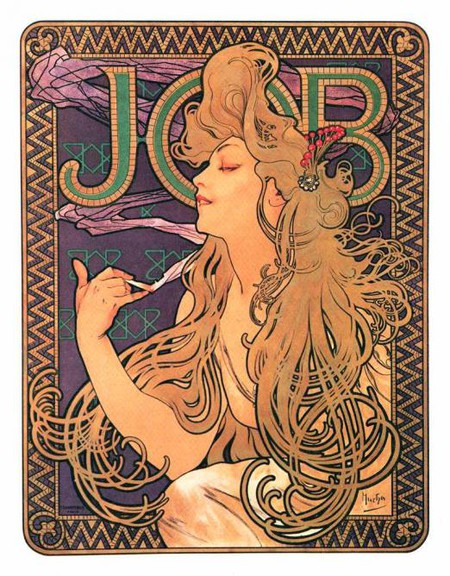 He began to direct his talents towards more personally appealing projects, and thus towards the turn of the new century his work became increasingly imbued with political significance. Mucha had always been fond of his native Moravia, and during a sponsored tour of the Balkans for an Austro-Hungarian government commission, his admiration was heightened. This patriotism culminates in the Slav Epic – a strikingly different, more solemn and somewhat haunting collection of paintings that illustrated the most significant events in the Slavic nations’ rather turbulent history.

Mucha wished to document the trials and tribulations of the Slav people and to essentially celebrate their strength and solidarity. It was a project for which he determinedly sought funds, the pursuit of which took him on numerous occasions to the United States – it is largely thanks to the financial support of American businessman Charles Crane that the Slav Epic became viable. It was a task that would immerse the Czech artist for almost two decades. The complete series, the final installment of which depicts a glorious Messianic figure representing the liberated, independent Slav nations, was presented to the city of Prague in 1928, coinciding with the 10th anniversary of Czechoslovakia’s formation. 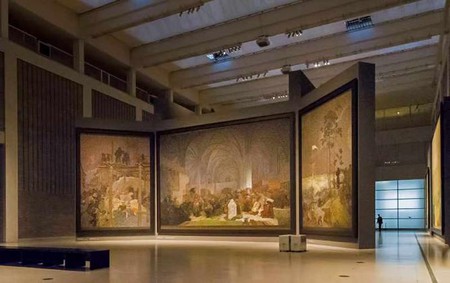 It is particularly poignant and incredibly sad, therefore, that Mucha’s health should deteriorate amid further political turmoil in Europe. Just before the Nazi invasion of Czechoslovakia in 1938, Mucha contracted pneumonia and passed away on July 14th, 1939, only ten days shy of his 79th birthday. Mucha’s artistic legacy is momentous. His designs still feature on the postage stamps and banknotes of what is now the Czech Republic, but several of his earlier and most iconic illustrations are strewn the world over – on posters and postcards, food and drink labels, as well as café and restaurant menus. His enchanting, fairytale-like designs are particularly prolific in his native Prague and of course in Paris, in which he is a star.