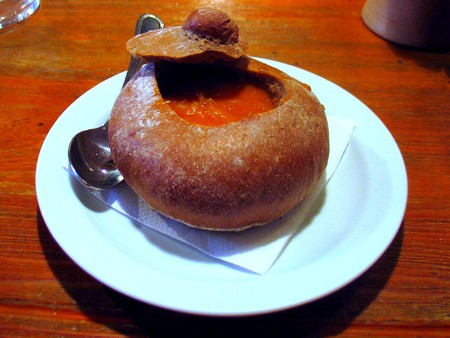 Czech soup served in a bread bowl I © Artur Orujaliev/Flickr

Artur Mushrooms are a big part of Czech cuisine. Available in their wild form at the many farmers’ markets around the country, mushrooms are also popular in dried form. If you want to try some of the best, check out our round-up of these eight famous dishes where mushrooms truly are the star of the show.

Houbový kuba is a dish commonly served during Christmastime. It consists of barley cooked with mushrooms, fried onions and garlic. Although there are a number of recipes available, the traditional dish is spiced using caraway and marjoram before being placed in the oven to take on a golden colour.

A rich mushroom soup with lots of cream, this dish is similar to the typical cream of mushroom soup we’re used to having in other countries – except that Czechs often roast the mushrooms in butter before adding them to the soup.

A hearty dish of tender beef covered in a creamy mushroom sauce, hovězí na houbách is cooked with caraway seeds and served with a side of mashed potatoes or dumplings.

Fried mushrooms are the Czech Republic’s alternative to French fries. Often served as a side dish, appetizer or a snack to pair with a cold beer, the mushrooms are coated with flour or bread crumbs before being deep fried. They are often eaten with a serving of salad and covered with seafood sauce or sour cream.

Say the word “soup” in Czech and you’ll be offered this dish, the “soup of all soups.” Kulajda is a thick, white soup made with wild mushrooms (which give the soup its distinctive scent), cream, quail’s eggs and potatoes.

Despite its name, this hearty soup is made not only with potatoes but also a number of other root vegetables, leek, cabbage, onion and garlic. Although the soup can be served at any time, it’s particularly popular in the Fall because this is when Czechs go “mushroom hunting” in the local forests. During the rest of the year, you can use regular mushrooms to add to the recipe, but wild mushrooms provide a unique touch to this traditional dish. It’s often served inside a loaf of bread that serves as a bowl.

Kyselo, which translates to “sour,” is a traditional soup made with mushrooms, rye sourdough and fried onions. It was a common dish for poor country folk, especially in the area of the Krkonoše mountains, where the recipe originated. Modern recipes often include potatoes and eggs, although the traditional recipe included neither.