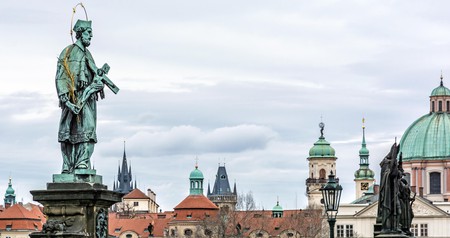 Walking through the streets of Prague is a magical experience, with countless beautiful and historic buildings and landmarks to marvel at. The Czech capital is also home to an array of sculptures that cover a range of subjects and artistic styles. 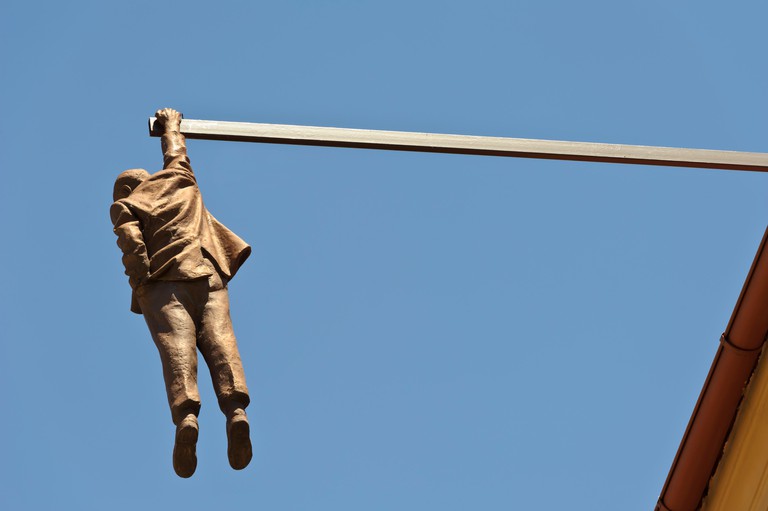 This sculpture, found in Prague’s Old Town, is easily missed if you’re not looking up. It depicts the psychoanalyst Sigmund Freud hanging by one hand on the top of a building, seemingly pondering whether to hold on or to let go. Freud was born in Freiberg, which is now known as Příbor and is part of the Czech Republic. During his life, he suffered from a number of phobias, including the fear of his own death. Artist David Černý, whose work can be found throughout Prague, chose to depict the psychoanalyst in his constant struggle with this trepidation. Unexpected and eye-catching, Man Hanging Out has often been mistaken for a real person and has prompted calls to the city’s fire and police departments. 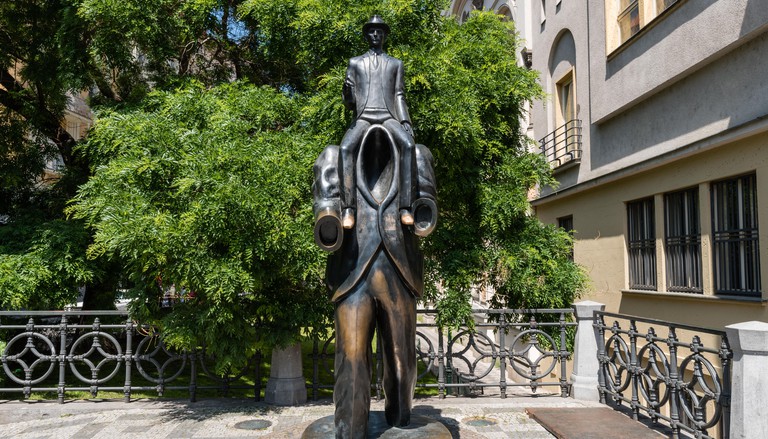 This surrealistic sculpture depicts a mini Kafka riding on the shoulders of a giant, empty suit. It was commissioned by Prague’s Franz Kafka Society in 2003 and created by Jaroslav Róna. The image was inspired by the writer’s short story ‘Description of a Struggle’ (1912), in which the narrator explores a fantasy landscape from the shoulders of “an acquaintance”. The monument stands in the historic Jewish Quarter in Prague, where Kafka spent most of his life, close to his former family home. It is also close to the Vltava River waterfront, where an important part of the story takes place.

Touch the Statue of St John of Nepomuk for good luck 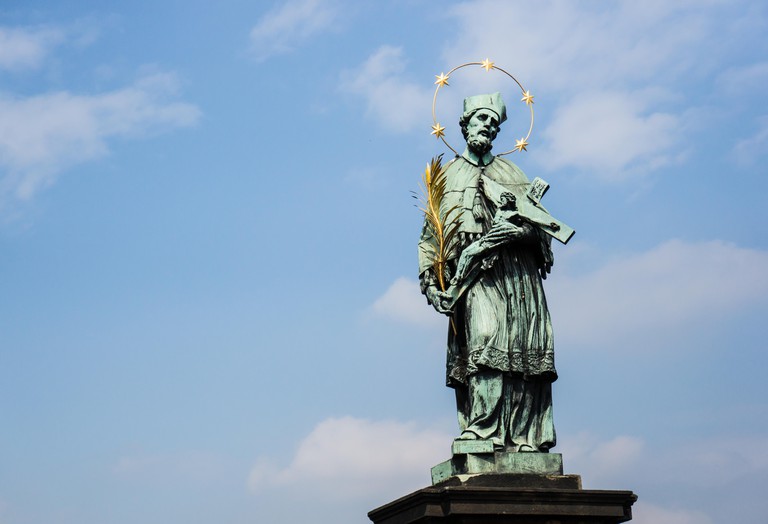 The Statue of St John of Nepomuk is one of the 30 sculptures mounted to the balustrade of one of Prague’s most famous landmarks, the Charles Bridge. The statue represents the court priest of King Wenceslas IV, who supposedly died after being thrown off the bridge in 1383. Legend has it that the king had him killed because St John refused to reveal the secret confessions of the queen. Touching the statue is supposed to bring good luck and ensure that visitors return to Prague soon. A few steps away, you’ll find a cross with five stars on the left parapet of the bridge, which is said to mark the spot where the priest was thrown in the water.

Pay your respects at the Memorial to the Victims of Communism 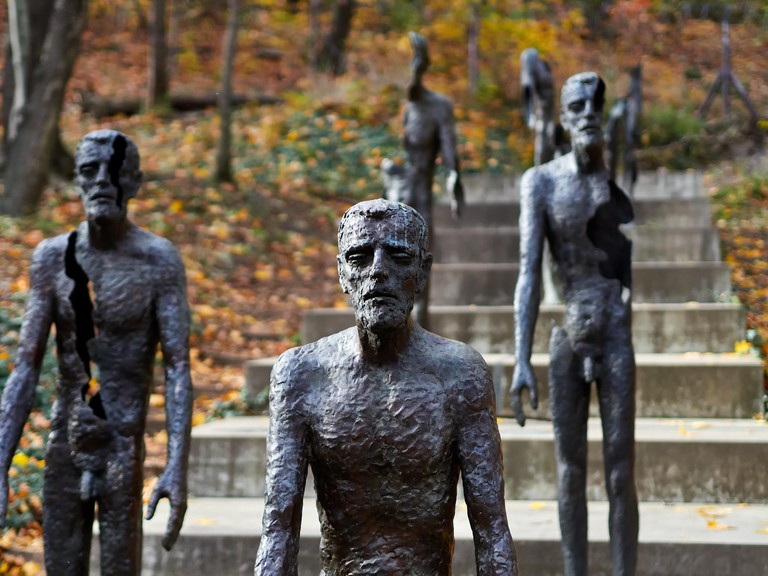 The Memorial to the Victims of Communism displays the seven phases of a man living in a totalitarian state | © Armando Borges / Alamy Stock Photo
This harrowing series of bronze statues portrays seven broken, decaying men descending a flight of stairs. The work of sculptor Olbram Zoubek and architects Jan Kerel and Zdeněk Holzel, these sculptures commemorate the victims of Communism in the Czech Republic. It shows seven phases of a man living in a totalitarian state, representing the gradual physical and psychological destruction of humanity. A bronze strip that runs along the centre of the memorial tells the devastating story of the years between 1948 and 1989. Over 200,000 people in what was formerly known as Czechoslovakia were found guilty of political crimes. Of these, 248 were executed, 4,500 died in prison, 327 died when trying to escape the country and over 170,000 people fled or emigrated.
Open In Google Maps
420/14 Újezd, Malá Strana, Praha 1 Hlavní město Praha, 118 00, Czech Republic
Visit Website
Give us feedback

Stop by the ‘Czech Musicians’, a representation of four major rivers 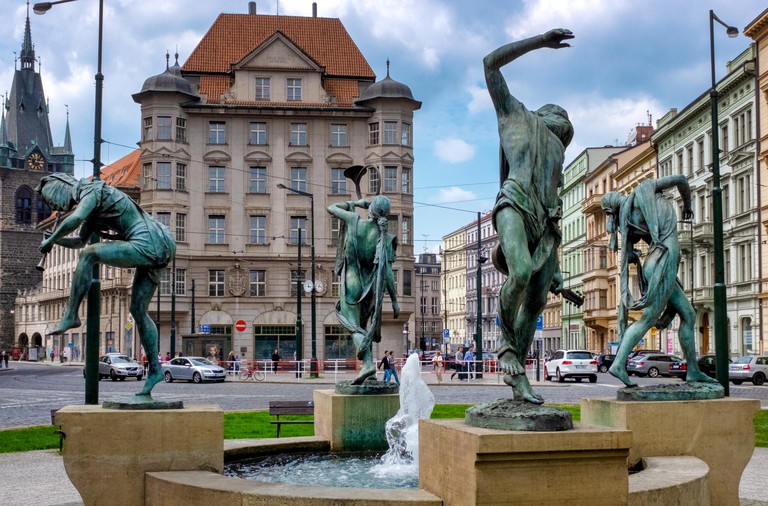 In Sénovàzné Square in Prague, you’ll find four bronze figures dancing around a fountain. These are artist Anna Chromý’s Czech Musicians. All are blindfolded, and each plays a different instrument. They represent four major rivers of the world: the Ganges, the Amazon, the Danube and the Mississippi. The dancers are so expertly captured that it is hard to walk by the figures without stopping to admire their fluidity and expression – it’s almost as if you can hear their music being played.