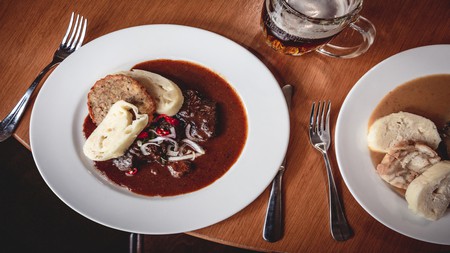 The Czech Republic has a very traditional meat-and-potatoes cuisine, with dishes heavy on gravies and root vegetables. Winter is perhaps the best time to try Czech food when hearty soups take centre stage.

This popular dish consists of braised beef covered with a thick, creamy sauce of parsley root and carrots. It’s usually accompanied by a side of cranberry sauce and whipped cream.

Perhaps the most traditional Czech dish you can ask for at a restaurant, vepřo knedlo zelo is basically roasted pork with dumplings and a side of pickled cabbage.

While schnitzels aren’t exclusively Czech, řízek is unique in that it can be made using a number of different meats, covered in both flour and breadcrumbs before frying and served with a side of potato salad. Pork schnitzels are particularly popular in the Czech Republic, but there’s also a trout schnitzel commonly eaten during Christmastime.

The Czech version of meatloaf is made combining half pork and half beef mince and then adding slices of bacon, onions and garlic. Herbs such as marjoram and parsley are also sometimes added.

A garlic-heavy soup with croutons, česnečka also contains a raw egg, which is added near the end of the cooking process and left alone to cook in the heat of the soup. Small pieces of sausage, pork or cheese is sometimes added to it as well.

Uzené technically means just smoked but the dish is always made with meat, usually pork. Juniper berries and peppers are often used as a side.

A pork stew (although beef or game is sometimes used) with lots of onions, guláš is usually served with bread dumplings or slices of dark bread. A common meal during winter, it’s also one of the simplest and cheapest Czech dishes you can try at a traditional restaurant.

Technically, this is beef in any type of tomato sauce/soup, although soup is the usual liquid of choice. The soup is often made using a mix of chopped tomatoes and tomato paste, to which already cooked beef, onions and spices are added.

Don’t let the name scare you – this is actually a popular pork dish. Served with sides of sauerkraut and dumplings, Moravský vrabec is rich and heavy and best enjoyed with a glass of cold beer.

Don’t let the name confuse you. This is just a meat patty (not an actual full burger with bread and toppings), made with minced pork, fish or sometimes beef. Once shaped into a patty, it’s often covered with breadcrumbs and fried.