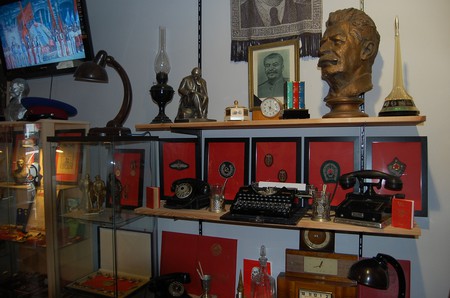 This small museum is owned and curated by a very enthusiastic (and eccentric) Russian, who has made his private collection of KGB memorabilia available to the public. Even if you only have a small interest in this period of history, this place is well worth a visit. We take a look at some of the interesting things on display at the KGB Museum in Prague.

A death mask is a plaster impression taken of a person’s face after his death. The result is a template image that can be used to create sculptures or preserved as a memento. The KGB museum is home to communist revolutionary Lenin’s death mask, made in bronze.

Russian revolutionary Leon Trotsky was assassinated in 1940 on Stalin’s orders. Trostsky had fled to Mexico hoping to evade capture but was found by a Soviet agent, who killed him in his own studio using an ice axe. The murder weapon somehow disappeared and wasn’t found again until 2005. After some dispute regarding its ownership, the weapon ended up here, in the museum.

While KGB agents often wore civilian clothes (they were, after all, spies who wanted to remain anonymous), they also had official uniforms and insignia that looked very similar to the uniforms worn by Soviet Union soldiers. There are some on display in the museum.

The museum has several incredibly tiny but very real guns on exhibit. Most are concealed guns, the kind that could be hidden inside a pack of cigarettes or a tiny metal container. 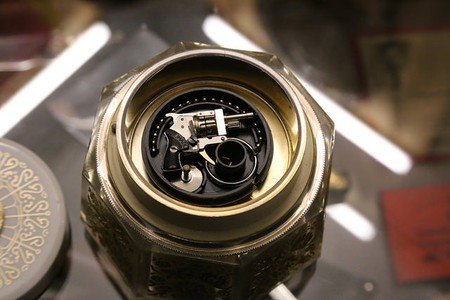 The museum has a collection of photographs extracted directly from the KGB archives. Many of the photos are images taken in Prague by an agent on assignment. Because nothing is known about the assignment itself, visitors to the museum can play guessing games trying to figure out what the agent could have been photographing and why. There is also an extensive collection of images of former KGB agents.

Propaganda posters were used during Soviet times to influence public opinion. The colorful ones on display at the museum contain poignant messages about equality, the power of the Red Army and the importance of the Revolution.

Guns abound at the museum. There are also a range of knifes, automatic rifles, and even an obviously used, original garotte – a special wire with handles used to strangle people, known as “Stalin’s scarf.” 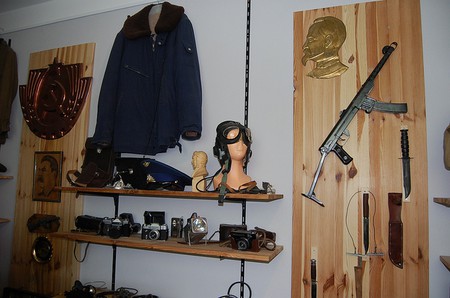 The Communist regime wasn’t adverse to using torture methods as a way of extracting information. The KGB was particularly fond of electroshock as an interrogation device. Since it’s less messy than other forms of torture, it can be used almost everywhere and it tends to produce quicker results. An example of an electric “interrogation machine” can be seen on display.

Hidden tiny cameras might seem like a modern invention, but the KGB was using them too. From the standard cameras of the time to the unusually tiny and easy to hide in a pocket for more secret missions, the museum has a great collection of cameras used by the KGB. 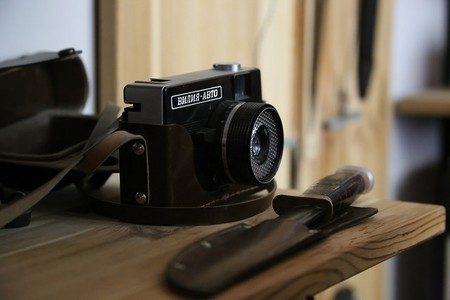 The museum houses an impressive collection of merit badges and medals given to KGB agents and civilians who helped agents. The medals were considered a high honor and were highly regarded during the Soviet times.