The Best Villages To Visit In Cyprus

Cyprus, an island in the eastern Mediterranean, has long been famed for its warm climate and sun-drenched beaches. There are many gems which lay further inland too, idyllic areas that are often overshadowed by the wine-growing regions and archaeological sites traditionally drawing the tourist crowds. Scenic villages lay dotted across the central mountain range, places which offer a wealth of opportunities to explore the different stages of the island’s rich history. Oozing charm and with an abundance of historic architecture, these remote villages are Cypriot must sees no matter what the season.

Village in Cyprus I | © Lukes_photos/Flickr

Kakopetria is supposedly named after an evil rock, with kako meaning evil and petra meaning rock in English. Local legend says this rock originally rolled over to crush two newlyweds. But despite the ominous reputation, Kakopetria is a top spot exuding friendliness and unbeatable Greek hospitality. Located on the foothills of the beautiful Troödos Mountains, the village is just a short drive away from the bustling capital of Nicosia, and the enchanting medieval quarters of the village are primarily composed of winding streets filled with flowerpots, quaint stone houses and charming overhanging balconies. Tall trees shelter the vibrant stone paved central square, where one can indulge in some of the best traditional Loukoumathes (Greek honey doughnuts) in the region.

The name ‘Lefkara’ derives from the combination of Greek words ‘Lefka’, meaning white, and ‘Ori’, meaning hills, and indeed it is located on the idyllic and undulating southern slopes of the Troödos Mountains. The village is most famous for its production of top quality lace, and according to local legend even the famous Italian artist Leonardo da Vinci made a trip here to purchase a lace cloth in 1481. A main draw for tourists today are the groups of women who sit outside in the streets working diligently on fine embroidery. Other attractions within the village include a small Turkish delight factory and a folklore museum, an establishment which provides an enthralling glimpse at what life in Cyprus was like hundreds of years ago.

With only 100 permanent residents, Lofou is the perfect location for visitors to find a piece of relaxation in Cyprus. Arab invasions preceding the Frank era in the 12th century meant Cypriot locals were forced to abandon the coasts and relocate further inland, and the large hills surrounding this village made it a well-protected, sought after spot in which to settle in. Since this time, Lofou has been renowned for its stunning mountain terrains, picturesque, cream colored buildings and verdant vegetation.

Situated geographically within the renowned wine region of the Limassol district, Omodos is a village which prides itself on producing sweet grape flavors and exquisite wines. Fruit trees and luscious vines are regularly cultivated in the region, and many local outlets offer visitors the chance to sample wines free of charge. The encompassing mountains here provide a stunning backdrop for the contrasting red rooves and pale stone of the village houses, elevating this place as one of the most picturesque in the region. The native villagers are renowned for their enthusiastic friendliness and warm hospitality, and other local sites of interest here include the medieval winepress, a wine-making device dating back 500 years, and the Monastery of the Holy Cross, one of the oldest and most historically significant religious sites on the entire island. 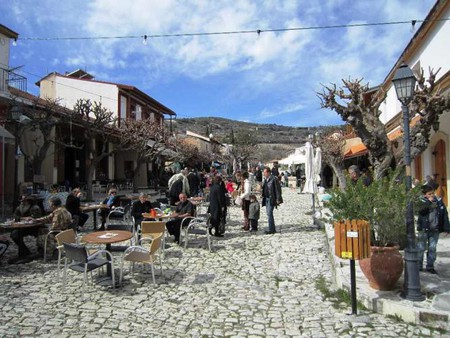 Platres is an idyllic destination surrounded by lush greenery. A versatile spot, in the summer, city residents flock to the village to escape the sticky coastal heat, and in winter the resort serves as a skiing base for the nearby slopes at Mount Olympus. Its location deep within the mountains means it is a spot offering a wealth of outdoor hiking and biking trails, and the number of visitors to the region has flourished rapidly in recent times due to the number of quaint hotels established here by colonial settlers. Observe the region’s rich local flora at the nearby Caledonia nature trail, and when you reach the end you will discover a surprise in the form of Cyprus’ tallest waterfall.