The Most Beautiful Buildings in Cyprus 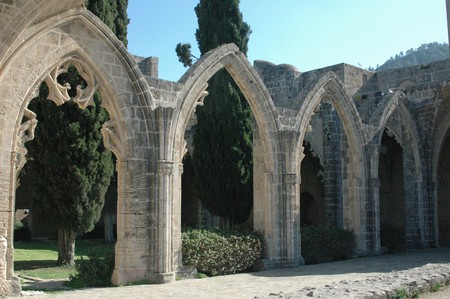 Cyprus is home to some truly striking architecture, including significant monuments spanning the time from the birth of human civilization right through to the present day. If you want to learn more about beautiful buildings in both in north and south Cyprus, check out our ultimate guide.

The Oval is one of the tallest buildings located in the heart of Limassol, Cyprus’s cosmopolitan city. The iconic landmark stands 75 meters (246 feet) high and sits just a few steps away from the Mediterranean Sea. With 14 levels and two underground parking areas, the Oval opens to a light-filled reception space overlooking a rainbow palette of flower gardens stretching towards the water. The working space accommodates people’s need to work, interact and experience the spectacular view of the sea and the landscape across Limassol. Its extensive glazing maximizes daylight and minimizes heat gain, while the materials used help to reduce carbon emissions, energy and water consumption.

The ruin of Bellapais Abbey or ‘the Abbey of beautiful peace’ is set at the foot of the Five Finger Mountain Range, in a small beautiful village of Bellapais. It stands at an altitude of 220 meters (722 feet) above sea level. With its advantageous high ground, Bellapais commands a fantastic view of the town of Kyrenia and the Mediterranean Sea. The 13th century French Gothic abbey of Bellapais has survived historic periods; from the French to the Genoese, then the Ottoman and later the British each leaving significant traces on it. The present-day abbey buildings show a mixture of destruction, restoration, and repair since 1960 and excellent survival over a long period of time. 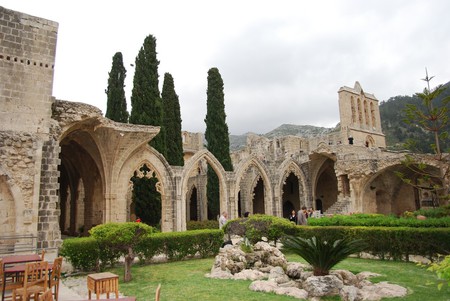 Formerly known as ‘The President’, the Wargaming HQ as its new name suggests is owned by an online gaming expert. Located in Nicosia’s Demosthenes Severi Avenue, Wargaming is 75 meters (246 feet) high, with 15 floors above the ground and two floors below, and uses a photo-voltaic system along with automation of machines, making it energy efficient. Rotos Developers sold the President to Wargaming in 2013, after which the design of the building was changed to accommodate the needs of the gaming company.

Inaugurated last March by Cyprus President Nicos Anastasiades, the Russian Church built by Russian businessman Viatislav Zaragovis is the first church on the island constructed in the Russian style. With its exotic golden domes made with a mixture of gold and titanium nitrate, the rather lavish and imposing Orthodox church has attracted attention from near and far. The onion-shaped domes glitter under the Cyprus sun, while the central dome weighs nearly eight tonnes. The church, which was designed by Andreas Mouktaris Architects and is located in the village of Episkopio in the Nicosia district, is designed to hold 400 people. It also features a children’s park to cater for children with special needs. 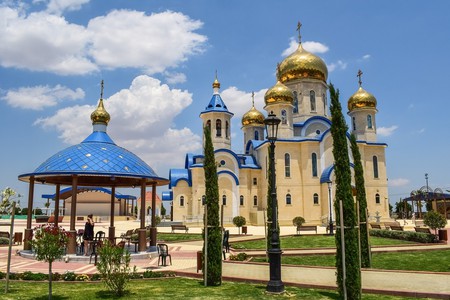 Towering 62 meters (203 feet) high on Nicosia’s skyline, Tower 25, also known as the White Walls, is yet another landmark designed by the world-famous architect Jean Nouvel. The high-rise building borrows largely from the island’s architectural design, intertwined with modern specifications. The mezzanine areas and the first six floors are offices of Ernst & Young, and have unique views of the city from all directions. The next seven floors host luxurious apartments overlooking the whole capital. The last two top floors contain the penthouse. Additionally, the building features a swimming poo,l making it the most expensive apartments in the city.

Lala Mustafa Paşa Camii (mosque), formerly the Gothic Cathedral of Saint Nicholas, is a medieval building in Famagusta, north Cyprus. According to analysis on the remains that have survived severe earthquakes and the Ottoman attacks in 1571, the architectural design was inspired by that of Reims in France, particularly the twin towers.

The Cathedral was begun in 1298 and consecrated in 1326. Until 1372, it was used as grounds to crown the Lusingnan Kings as King of Jerusalem- a purely ceremonial honor, since the Crusaders lost the Holy Land in 1291. As is in the Muslim religion, all images of the human form were whitewashed, plastered over or removed. Other than that, the ancient tracery has been preserved.

Lala Mustafa Paşa Camii is not the only cathedral turned into a mosque – St. Sophia in Nicosia is another, while several other churches that were converted into mosques when the Ottoman Turks captured the island are scattered across Cyprus. 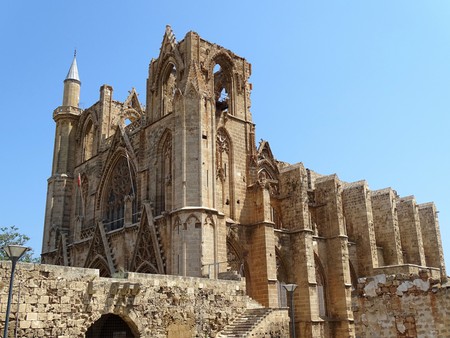 Limassol Del Mar is strategically set on the sea front, and measures 170 meters (558 feet) – it is a perfect example of the ultramodern curvilinear designs being seen across Cyprus lately. Its unique design gives each apartment breathtaking view of the Mediterranean Sea from every angle. The development also has lavish penthouses and duplexes with roof gardens and private swimming pools.