Somewhere Wonderful in Cyprus is Waiting 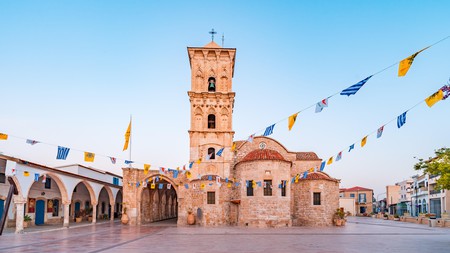 The church of Saint Lazarus, built in the late ninth century in Larnaca, is well worth a visit | © Evgeni Fabisuk / Alamy

With a rich history, glamorous seaside hotels and a thriving restaurant scene, Cyprus is a top destination among many travellers. With year-round sunshine, the Mediterranean island is also great if you’re looking for a winter-sun break – here’s our pick of where to go and accommodation recommendations, bookable on Culture Trip.

With its natural beauty, unique traditions and mind-blowing historical sites and monuments scattered around the island. If you’re looking to spend some time on the beach, the resort town of Ayia Napa should be your go-to destination. But if you’re looking to delve deeper into Cyprus’s culture, history and culinary character, we’ve singled out three cities that will give you an idea of the island’s rich heritage and of all the exciting things to do while there. 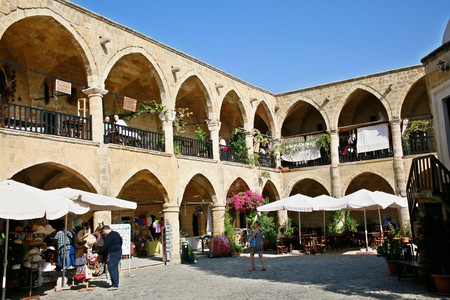 The Cyprus capital, Nicosia, is probably the island’s most characterful city, the only capital in the world that is divided in two, following riots that started between Greek Cypriots and Turkish Cypriots in 1963. The Green Line was created to separate the Greek from the Turkish side, but you can now cross easily from one side to the other and discover the rich history on both sides. Ottoman and Venetian monuments, such as the majestic 16th-century Famagusta Gate, Byzantine archaeological finds and grand medieval churches sit on the Turkish side. On the Greek side, walk the streets of the Old Town and discover its quaint shops and cafés, immerse yourself in the giant Athalassa National Forest Park with its hidden trails and serene lakes, and relax with a rejuvenating massage at the Hammam Omerye. No matter how divided, Nicosia is seamlessly delightful. 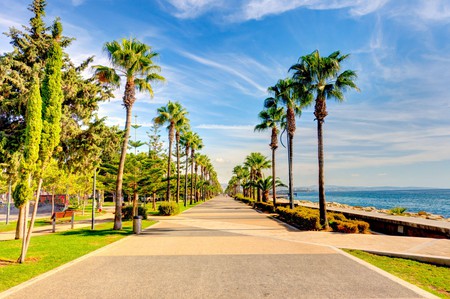 Limassol has to be Nicosia’s cosmopolitan sister. Next to equally impressive historical monuments and archaeological sites, the city is also known for its lavish marina, luxurious hotels, and Molos – a state-of-the-art seaside park stretching between the Old Port and Limassol Zoo. The most distinctive part of Molos is its plush, palm-tree-lined waterfront – a cross between Miami and Los Angeles. The park behind it features bike lanes, skate-boarding ramps, art installations and restaurants. On a more traditional note, Limassol’s little villages – such as the dreamy Omodos – will charm you with their stone houses, cobbled alleyways and excellent wine. History buffs will enjoy a visit to the medieval Limassol Castle, which houses coins, weapons and ceramics from different epochs. 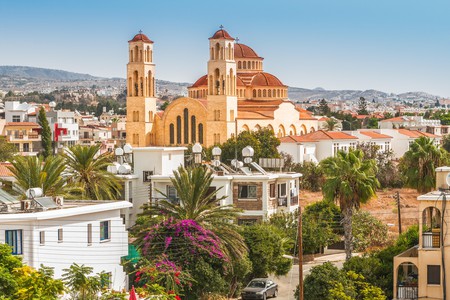 Known as the primary hub of worship of Aphrodite, goddess of beauty and love, Paphos exudes natural beauty at every turn. There are wine trails that take you to nearby wine-growing villages; for nature lovers you can visit Blue Lagoon beach, Avakas Gorge, or Akamas, home to monk seals and sea turtles. That doesn’t mean the city lacks history, though. The Tombs of Kings, a fourth-century BCE necropolis, the Kato Paphos Archaeological Park and medieval Paphos Castle are some of the city’s historical gems. The upper part of Paphos has some interesting neighbourhoods worth a visit, such as the Turkish Mouttalos district with its natural rock caves.

Things to do in Cyprus

Travellers visiting Cyprus will never run out of historical landmarks and archaeological sites to marvel at or attractive neighbourhoods to explore. In between Nicosia’s dual Greek-Turkish identity, Limassol’s ultra-modern waterfront and Paphos’s amazing beaches and villages, Cyprus has preserved its glorious past, while perfectly integrating it into its affluent present. Discover the best things to do in Nicosia, Limassol, Paphos, Larnaca and Ayia Napa through our extensive guides, search for your favourite tours, activities and experiences or read on for some of the highlights below.

Explore the Old Town of Nicosia 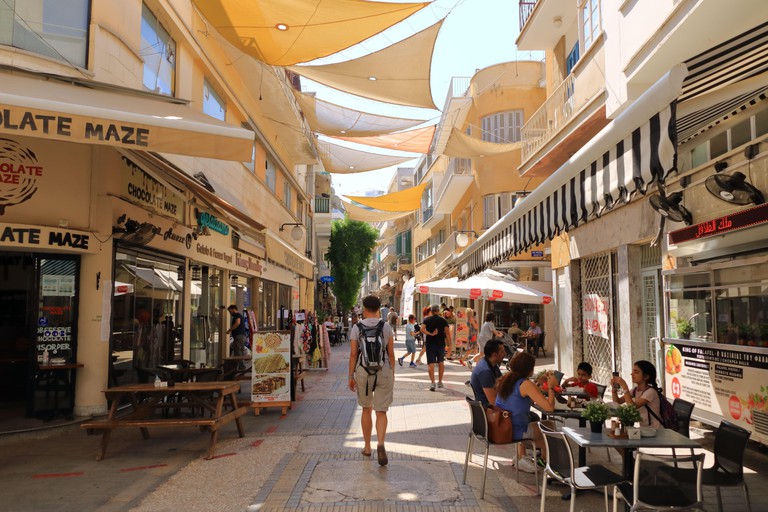 2F3D337 October 03 2020 - NICOSIA/Cyprus: People walking around the Ledra street. It is is the major shopping thoroughfare in central Nicosia | © Dynamoland / Alamy

Most of Nicosia’s fascinating and tumultuous past – and present – unfolds in the Old Town, around the pedestrian Ledra Street. This brims with local shops, restaurants and cafés where you can order a cup of strong Cypriot coffee, and ends at the Green Line’s main checkpoint. Just before you cross over to the Turkish side, remember to pass by the beautiful Phaneromeni church, which is known as the Lady of Nicosia thanks to its classy, Venetian structure. It’s also worth gazing at the city from the top of the high-rise Shacolas Tower. The 11th floor offers a panoramic view of Nicosia, along with old photographs and prints unveiling the town’s history. Show your passport at Ledra checkpoint and get ready to meet the other side of Nicosia. The 14th-century gothic church of Agia Aikaterini will instantly draw you in.

Visit Limassol's ancient town of Kourion and the sanctuary of Apollo 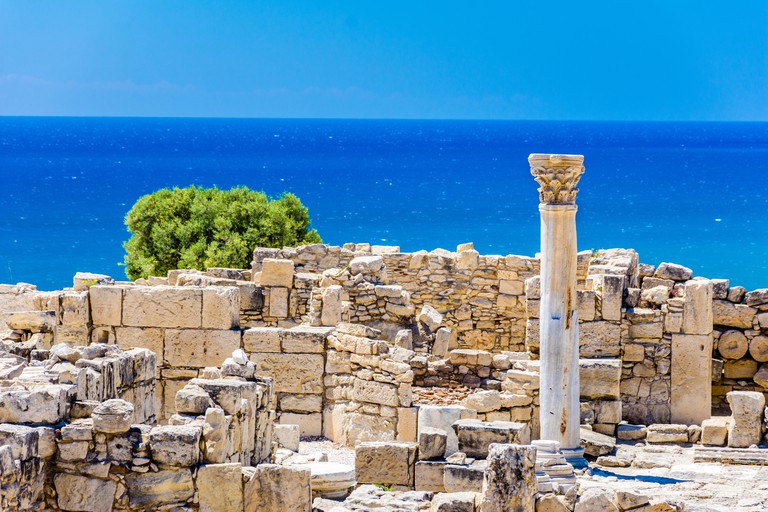 One of Limassol’s most prominent archaeological sites is the Unesco-protected ancient town of Kourion. This Greco-Roman city, which once overlooked and controlled the valley of the river Kouris, was one of the most important city-kingdoms in ancient Cyprus but was destroyed in 365CE by an earthquake. Excavations have since brought a great part of it to life through splendid buildings, mosaics and statues. Perched on a cliff, the superb Greco-Roman theatre, built in the second century BCE, still hosts musical and theatrical performances during the summer. West of Kourion, you will also find the sanctuary of Apollo Hyllates, the God-protector of Kourion, which served as one of the main religious centres of ancient Cyprus from the eighth century BCE to the fourth century CE.

Swim in the rejuvenating waters around Aphrodite's rock 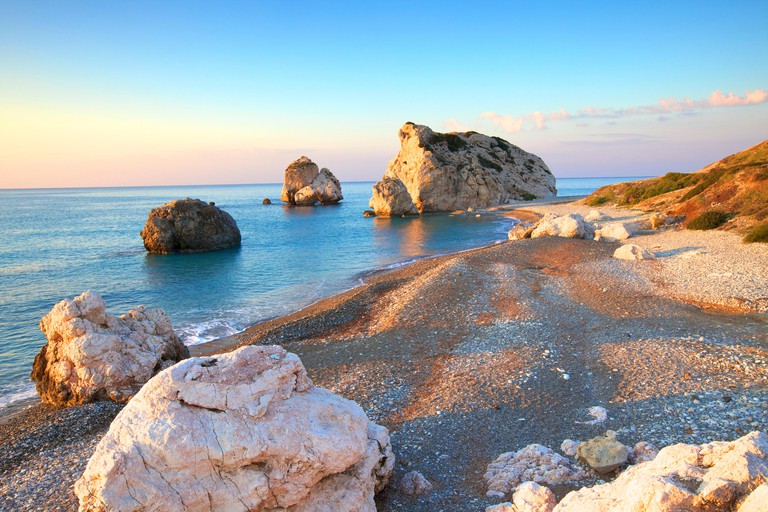 About 25km (15mi) east of Paphos lies the Unesco-listed Aphrodite’s Rock, also known as the Rock of the Roman. According to mythology, the goddess Aphrodite emerged from the foamy waters on this very spot, before she took to Mount Olympus to claim her place among the other gods. Today, people swim in the cool waters around the rock in the hopes of being granted eternal youth. Legend has it you can still catch a glimpse of Aphrodite’s silhouette as she’s rising from the sea in a scallop shell. To access the beach, you will need to follow a narrow pathway under the road. If you’re feeling adventurous, climb to the top of the rock and take in the magical views of the vast blue sea.

Where to stay in Cyprus

From sumptuous resorts to elegant villas, the accommodation options in Cyprus will make you feel like royalty. Pick your favourite from our curated list of the island’s best villas or take a look at our detailed accommodation guides for Nicosia, Limassol and Paphos. If you’re a fan of quirky yurts and old cottages, check out our guide to the most unique places to stay in Cyprus. Or if you’d rather search for your own dream hotel, you can use our handy search function. In the meantime, here are our top three picks below. 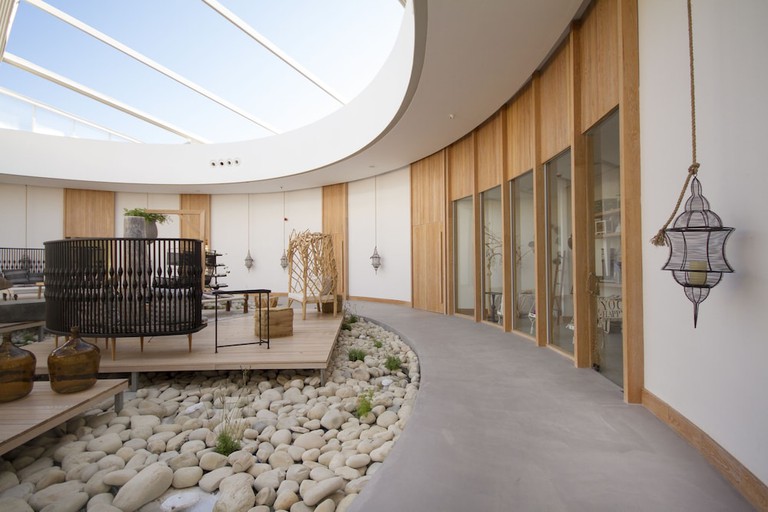 An ethereal, de-stressing experience awaits on the outskirts of Nicosia. Aelia Wellness Retreat serves as a deluxe, peaceful oasis that is bound to soothe your soul, while offering a good night’s sleep. The minimalist décor in white and earthly hues blends with ropes, bamboo and wooden elements, all amounting to Aelia’s calming powers. This eco-resort has 14 rooms – complete with private balconies or patios – whose primary energy source is the sun. The main draw is the Cocoon Spa, offering a series of wellness treatments that rely on fine natural ingredients, pure extracts and essential oils. On site, there’s also a 24-hour fitness centre and a restaurant serving healthy Mediterranean dishes. 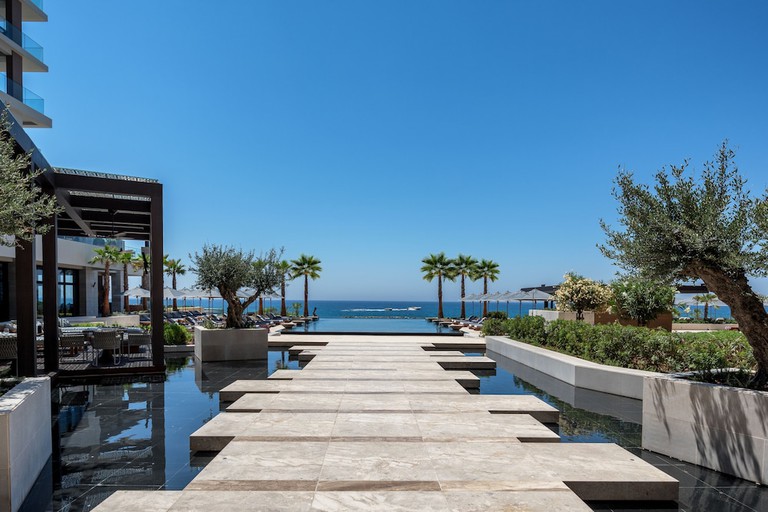 Its name is taken from the ancient Greek word amarantos, meaning everlasting, and Amara guarantees continuous relaxation in one of its 207 luxurious rooms. The hotel boasts panoramic ocean views from every room. Opt for a seafront cabana with a private pool, or take advantage of the private garden and cosy lounge from the rooftop duplex suite. Amara has two outdoor pools, two Michelin-starred restaurants and a full-service spa, complete with a fitness centre and an indoor pool. Don’t miss the spa’s signature treatment, a gentle exfoliation using organic olive oil, crushed carob seeds and warmed citrus fruit, which will leave your skin extra-smooth. 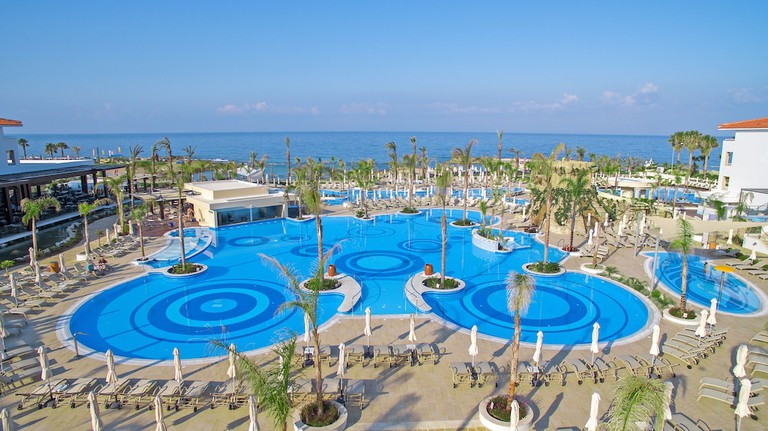 The seafront Olympic Lagoon Resort Paphos feels more like a resort town rather than a hotel, with 270 rooms each with a private terrace or balcony, five outdoor pools and one indoor pool, five restaurants, a tennis court, gym and spa. You can relax by the Hawaiian-style exotic pools or slide down the Mayan temple waterslides. Alternatively, indulge in massages and body treatments at the Serenity Spa & Health Club, or spend some quality family time, taking part in one of the 170 activities tailored to kids. You may also live the American dream at the 50s US-themed Rock’n’Roll Diner, with burgers, fries and a large milkshake.

Where to eat and drink in Cyprus

Apart from great wine, Cyprus also offers colourful cocktails and Mediterranean or ethnic flavours in its bars and restaurants. Choose from traditional tavernas, buzzing beach bars and sophisticated seafront restaurants. Explore all the culinary scene has to offer through our Food & Drink lists. For now, here are three of our favourite restaurants and bars. 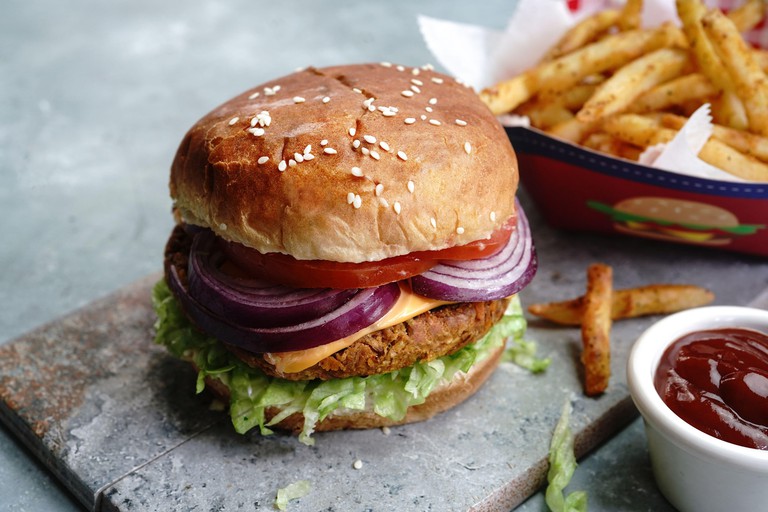 This stylish restaurant in Nicosia Old Town is famous for its Mediterranean cuisine and delicious brunch, offering gourmet salads and fish with a twist, such as the calamari with Asian herbs and homemade hummus. The luscious eggs benedicte with mushrooms, and the fruit-filled croissant topped with white chocolate are among the brunch offerings. Also popular with locals are the burger options – from the classic beef burger with cheddar to the veggie quinoa burger. The vintage décor completes the feelgood, homely ambience.

Bar, Pub Grub, $$$
Facebook
Email
Twitter
Pinterest
Copy link
Share
Map View
Partygoers will love Guaba, an exotic beach bar in Limassol that hosts wild DJ parties by the sea until the early hours. The bar is open seven days a week and serves anything from light snacks – such as bao buns and mini burgers – to signature cocktails such as the Kanhizakura Sakura, with Japanese sake and Midori mixed with port, guava juice, crystal syrup and fresh lemon. The DJ parties ahere re legendary, having turned the bar into the ultimate dance venue. Among the long list of DJs and acts who have played here are Martin Garrix, Fedde le Grand, DVBBS, Above & Beyond and Roger Sanchez.

For a South African culinary experience, the Lodge Steak & Seafood Co in Paphos, in a typically African setting with superb coastal views, has an impressive menu of chicken, steak, seafood and vegetarian dishes. The wooden furniture and the basket of warm complimentary bread served to you as soon as you find your seat, will make you feel at home, even if you live nowhere near Cape Town or Johannesburg. For an al-fresco experience, take a seat on the airy, sun-filled terrace.