With a burgeoning and diverse cultural scene, Cyprus has modern and traditional art in abundance and has announced itself as a major force on the international art scene. These ten contemporary art galleries in Nicosia, Larnaca and Limassol showcase the best of the Cypriot commitment to art and culture and are must-see destinations on the Mediterranean island.

Located between the old city and the commercial center of Nicosia is the Point Centre for Contemporary Art, a non-profit organization that aims to help in the creation and support of various fields of contemporary arts including film, music, performance and architecture. The center hosts international commissions but has a distinctive Eastern Mediterranean context that brings a certain vibrancy to the art from its local surroundings. Born of a collaboration project, the foremost goal of Point Center is to provide an exhibition space to Cypriot artists. Seminars, workshops and lectures are also held at the gallery in order to help further the artistic ambitions of interested locals. 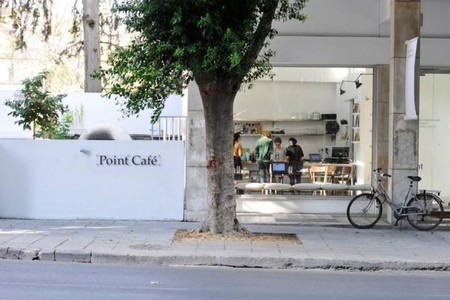 Founded in 1977, Gloria Gallery is the longest established venue for contemporary arts within Cyprus, exhibiting artists both from around the island and based overseas either in a unique or cross-cultural context. A small gallery with an exhibition space on its ground floor and first floor, it offers up an intimate interaction with the artists and work it showcases. Such a broad range of artistic endeavor from around the globe makes the art inside the gallery far-reaching and diverse in both its origin and its subject matter. With regular exhibitions running for around a month, there is often something new for regular visitors.

Housed in the Old Electric House, donated by the Cyprus Electric Authority, the Nicosia Municipal Art Center was built to the principles of the Bauhaus movement. The inside is no less impressive as it is home to an array of contemporary art pieces from well-known artists and, since its opening in 1994, has established links with many galleries around the world allowing it to host exhibitions of work from Vincent Van Gough to Picasso. One of the main interests of the gallery is the link between art and technology and how they help, hinder and complement each other in this modern age.

With a 250-square-meter exhibition space which is specifically designed for the showcasing of art, the Alpha C.K. Gallery sets itself up well with a wide-ranging assortment of artists, styles and movements decking out their collection with painting, prints, and sculptures all jostling for attention. Focusing predominantly on Greek and Cypriot art, Alpha shows the best of what the island has to offer in the way of cultural significance and artistic relevance. They do, however, also exhibit art from Europe, America and Eastern Europe to bring a more international feel to the gallery overall.

Cinema, Theater
Facebook
Email
Twitter
Pinterest
Copy link
Share
Map View
The Artos Cultural and Research Foundation is unique in its approach to blending art and science harmoniously and presenting them as one and the same. With directives aiming to produce and promote quality and contemporary cultural work it organizes and undertakes multifaceted events from the worlds of dance, theater, music, cinema and the visual arts as well as hosting seminars, lectures and presentations about scientific endeavors and breakthroughs. Showcasing material from the Euro-Mediterranean area and broadening the scope of arts within Europe are just a few of its many aims.
Open In Google Maps
Agion Omologiton, Agioi Omologites Nicosia, Nicosia, 1080, Cyprus
+35722445455
Visit Website
Give us feedback

The open-plan space of the Argo gallery lends itself to a level of versatility and flexibility for each of its exhibitions meaning that with each different display the gallery itself can take on a separate life and completely embody what the artist intended, with previous exhibitions including site-specific installations or wall-mounted pieces. Open since the 1970s, Argo hosts Cypriot, Greek and international artists whose work is exhibited for around three weeks, thus making sure that there is always something fresh and exciting on view for regular attendees or just the casual viewer.

One of the leading contemporary art galleries in Cyprus, Omikron Gallery opened in 2005 and has a programme of regularly changing monthly exhibitions which was inaugurated by Aggelos Makrides, one of Cyprus’ best known artists. Since then it has continually hosted some of the best in emerging talent from Cyprus along with established artists who have gone on to find international acclaim. With a goal to introduce Cypriot art onto the local and international scene in order to show off the dynamic and diverse artistic creations coming from the island, Omikron represents ten Cypriot and Greek artists of international stature.

Perhaps a little unexpected in the middle of the Mediterranean, Proud gallery represents contemporary Russian artists and aims to bring the art of Russia to the people of Cyprus through its exhibitions. With paintings, sculptures and decorative arts all housed at the gallery and constantly changing exhibits, there is an eclectic mix of work from the Eurasian state that tells an intricate and expansive story of its people and their drive for artistic perfection. Previous exhibitions have featured dolls, toys and teddy bears as well as mosaics and other more figurative works.