A Glimpse of Cypriot Art: The Seductive Symbolism of the Everyday

Largely marginalised in discussions of European Art, Cyprus is more famous for its classical references than its contemporary art scene. However this island has produced some compelling contemporary masters, five of whom are collected below. 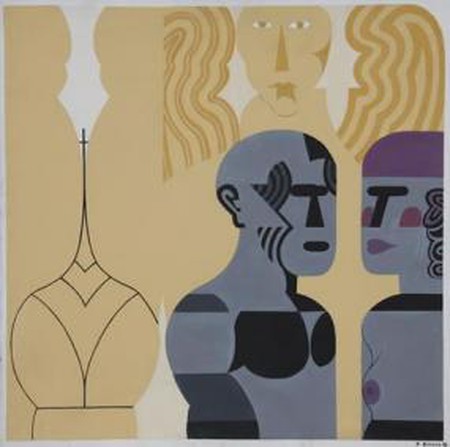 Muse,tell me the things done by golden Aphrodite, the one from Cyprus, who arouses sweet desire for gods and who subdues the races of mortal humans, and birds as well, who fly in the sky, as well as all beasts all those that grow on both dry land and the sea – The Homeric Hymn to Aphrodite

Mythology tells us Aphrodite, the goddess of beauty, was born in Cyprus. In honour of this privilege, the third largest island in the Mediterranean Sea has produced challenging aesthetic art throughout its history. Despite violent internal conflicts and economic crises that repeatedly overwhelmed an already unstable country, Cypriot art appears the most suitable language to evoke and mimetically portray the beauty of its nature. Here is a vade mecum whose aim is to highlight five representative contemporary Cypriot artists, singularly idiosyncratic carriers of their own style, which will attempt to illuminate the frustrating approximation that easily rules people’s awareness of marginalised countries. 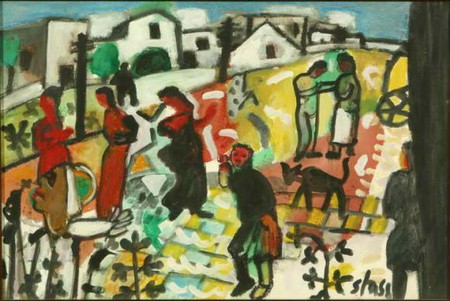 Paraskos, probably the most controversial Cyprus-born artist, describes unpretentious moments of ordinary life by avoiding technicality and sincerely enjoying the basic beauty of forms and colours. The artist (born in 1933, Anaphotia) moved to Leeds with his family in 1953, where he attended the College of Art.

He achieved notoriety in the United Kingdom because of the ‘obscenity case’ he was entangled in; Paraskos’ paintings, often portraying women’s nudes and celebrating a hedonistic sense of life, were attacked for being ‘lewd and obscene’ in 1966. Paraskos lost the case but became a cause célèbre in the art world, which raised his profile immensely. Paraskos’s style is an eclectic fusion of Gauguin’s combinations of colours and Matisse’s sensual exoticism. Despite these similarities, it never loses its ‘here and now’ originality; Cyprus with its folklore and rituals is, in fact, the essential subject of his work. 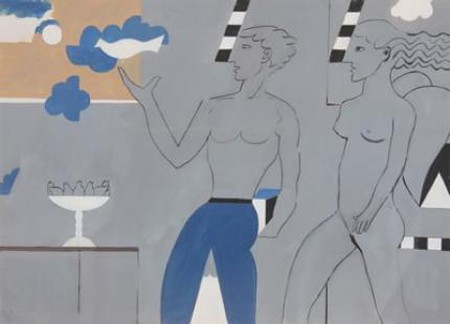 Votsis and Paraskos worked together for many years, combing their own projects in an artistic collective, described by Paraskos’ son Michael as an ‘anarchist commune on the canvas’. Like his friend and colleague, Votsis studied his profession in England. This may be the reason that his work displays such a plangent nostalgia for the daily landscapes of his childhood.

The Cypriot painter maintains a confidential affair with his viewers by openly dealing with themes such as love, relationships, all bonded together in a quasi-spiritualistic way. Some of Votsis’ pieces are architectural drawings, where the order of geometrical shapes might have served as a remedy to the chaos of an untidy soul. In the spirit of untimely works, his art is only appreciated now, while previously the Cypriot public, probably speechless in front of Votsis’ futuristic approach, didn’t recognize its value. 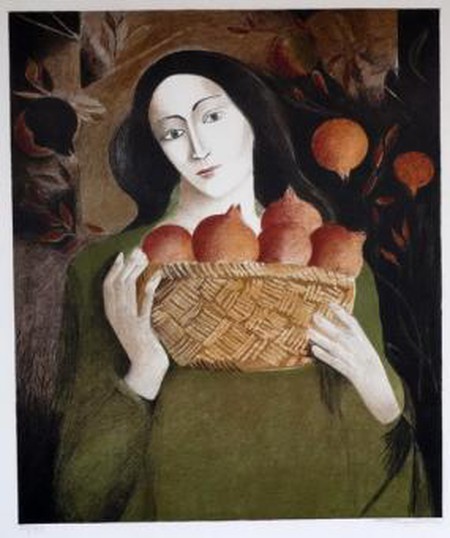 Charalambides, another figurative painter whose education was partly spent in England, celebrates the feminine universe by portraying different kind of women as the symbolic embodiment of a contact with nature.

One of his works is a four seasons panel quadriptych in which he represents the same woman four times; her black bob is always the same, as is the unchangeable background, but each time the painter captures a different expression.

The woman’s ornaments, such as dresses and flowers, become more than mere decorations and enrich the painting with both symbolism and spirituality.

Charalambides’ figures are astonishingly regal and their upright position recalls the same elegance of Felice Casorati’s paintings where ladies, despite their physical presence, have nothing to do with materiality. 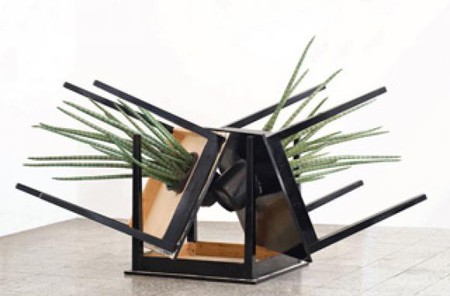 Christodoulides is an artist who manipulates the ordinary object. Garden chairs, tapestries, clothes-dryers are all parts of his repertory. Born in Pafos in 1961, he still lives in Cyprus where he teaches art and design at the Frederick University.

In his work items lose their qualification as commodities; the object is not something the subject has got ‘in front of his eyes’ (from Latin objectum), but a very personal interpretation of it, driven by an intense and unpredictable conceptual spirit. In so doing, tables cannot function anymore as flat surfaces on which one places drinks and food; they have being turned over or broken by an accumulation of other furniture. Christodoulides’ inclination seems to add instead of taking away from reality; old photographs, either personal belongings or found objects, are manipulated by the artist who inserts different materials on them, building layers of meaning, and resonance.

Voskou lives in Limassal where she was born in 1976. She does landscapes, aquarelle, human figures, but of her heterogeneous range of subjects, the one in which she excels the most is doubtlessly the indoors.

The viewer cannot help but act as a voyeur, magnetically attracted by Voskou’s ambiguity; she paints living rooms, halls and tables alluding to the visible absence of humans, who were however present not long before the artist decided to capture the scene.

On the chair there is a pair of trousers and the couch’s blanket is still animated by the shape of a previous body that was set on it. As with Van Gogh’s chair, Voskou seems to be interested in traces and her focus is directed towards what stands for the human, its substitute or the object that replaces the person.

The viewer’s scopophilia is left frustratingly unsatisfied; the doors, which the artist likes to paint, are often obstructing limits to vision. The observer’s view is confined within a certain space, symbolising the unavoidable limits which affect someone’s gaze. However, such a situation also stimulates the viewers’ imagination; they are compelled to fantasize about what there is beyond Voskou’s doors, objects that act as thresholds between the repetitive daily territory and a more unexpected, fantasy scenario.