These Are The Cyprus Movies You Need to See 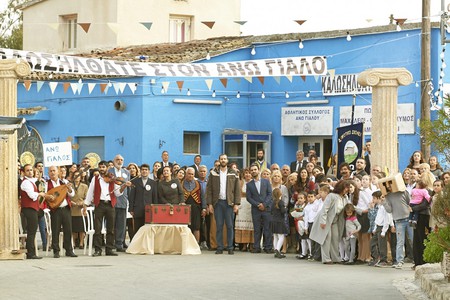 A shot of the villagers from 'Sunrise in Kimmeria' | © Fotocine Studios

Cyprus has the last divided capital in the world, meaning it features in many forms of expression, be it literature, music or film. Migration, nostalgia and the Buffer Zone are recurring elements you’ll spot in some way or another in Cypriot films. Discover below what we recommend watching, whether you’re a traveller wanting to know more about Cyprus, or whether you’re a local wishing to better understand your homeland.

Set in Nicosia during the 1974 war, The Story of the Green Line follows two soldiers serving on opposite sides of the Green Line that separates the north of the country from the south. The soldiers, Murat and Kipros, are forced to leave their homes and serve for the other side, meeting during a chance encounter while serving on the border, and decide to visit each other’s homes. Though strictly forbidden, the experience is highly emotional for the main characters, triggering memories of pre-war Cyprus, lost loves and family members. It is a powerful, relatable film for many Cypriots, and one that’s highly interesting for foreigners to gain a true insight into the island’s division and the stories that still haunt its people.

A comedy feature film with a deeper message about the perplexing identity of Cyprus is hitting local cinemas next year. Set in a Cypriot village, Sunrise in Kimmeria follows a rural population in Cyprus, showcasing the idiosyncrasies of their way of life. This folk tale revolves around a young villager who gets caught up in tragi-comic circumstances, after a strange sphere, tracked by a foreign intelligence agency, crashes into his potato field. The event raises identity issues that concern modern Cypriot life in a satire-like manner, as different parties fight to claim the sphere as part of their territory. The film includes lots of funny moments based on Cypriot stereotypes, so it’s a great insight into local culture. It recently won best Cypriot Film at the 2018 Cyprus Film Days International Festival.

Listen to the soundtrack here:

Boy on the Bridge is another locally produced film that has received numerous awards on a local and international platform. It’s also one of the local films that have been screened in big, mainstream cinemas of the island instead of independent studios where similar films are usually played. Set in a Cypriot village, twelve-year-old Socrates sees his careless days of cycling around and teasing the locals suddenly end when he finds himself at the centre of a murder investigation, which reveals a dark family secret that changes his life forever. Well-received by the local audience, it’s an interesting example of how Cypriot films are developing.

Director Longinos Panagi’s first feature film recently premiered at the Cyprus Film Days International Festival. Clementine is a surreal comic drama that focuses on a young boy who comes across two strange men in Cyprus, an encounter that triggers a spiritual awakening. The film is set in numerous locations of Cyprus; the daunting Ayios Sozomenos, Pervolia village, Ayios Theodoros village, Athalassa area and the old, divided neighbourhood of Kaimakli. With the traumatic past of the war in mind, this Cypriot-produced film shows the beauty and harshness of the island’s landscape with a young girl named Clementine symbolising the modern history of the island.

Another film that addresses the island’s division in a comic manner is Smuggling Hendrix. The films follows failed musician Yiannis as he attempts to get his dog back to the Greek-Cypriot side of the divide, after he runs away across the checkpoint in Nicosia. With only three days before his move to the Netherlands, Yiannis is faced with absurd regulations that forbid the transport of live animals from one side to another. The struggle to smuggle the dog back is, of course, symbolic of the trials that many Cypriots face every day as they try to deal with the legalities of the Green Line. The film has earned international recognition and has just won Best World Narrative Feature at the Tribeca Film Festival in New York.

On the topic of migration and nostalgia towards a long-lost home, Fish n’ Chips portrays Andy, a Greek-Cypriot immigrant in London who works in a fish shop owned by Turkish-Cypriot Jimmy. Caught between work troubles, his mother who suffers with dementia and his dreams of returning home, Andy realises life in London is not like in Cyprus. He decides to start a life back in Cyprus only to find that nothing is as he thought. Andy discovers that Cypriots aren’t huge fans of fish and chips, and as he struggles to deal with reality, his mother looks for her place back in her homeland. The film presents the desire of an imagined home, of moving away and the restless need to identify with something: a feeling a lot of travelling souls can relate to.

This is an old film that all Greek-speakers should watch to see how Cyprus looked before the 1974 war. Filmed all over the island, the film shows iconic landmarks which today have a totally different meaning and look. Among these are the busy popular beaches of Famagusta that are now mostly empty, and the Ledra Palace Hotel, now home to the UN, which was originally one of Nicosia’s best-known hotels in 1971. The story revolves around two fathers who try to marry their kids, who have other plans and get up to adventures around the island. Try to track it down to also witness how Greek films were made back in the day, which included many songs.

Here are some snippets from the film:

This Oscar-winning film which includes actors like Paul Newman and Eva Marie Saint received global acclaim and is based on the book Exodus by Leon Uris. The story is about the founding of the state of Israel as thousands of Jews – Holocaust survivors – are being held in Cyprus by the British, who will not let them go to Palestine. The film follows those Holocaust survivors and an intelligence officer who tries to get them to Israel, but faces many oppositions as Israel’s independence is declared. Exodus similarly displays the crucial geographic location of Cyprus and many of its landscapes, as the film was half shot on the island.