The Solo Traveller’s Guide to Croatia 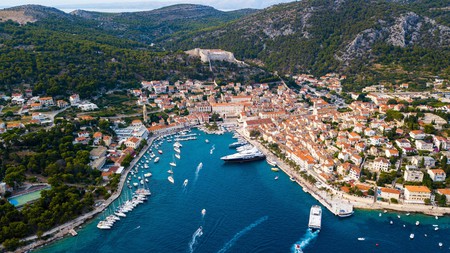 Travelling to Croatia was once considered an alternative holiday. Now, we realise what we were missing out on for so long. An engaging blend of party islands, Unesco World Heritage-listed old towns and dreamy landscapes is a snapshot of what this charming country is all about. It’s well set up for solo travellers, as this dedicated guide will prove to you.

The lowdown for solo travellers in Croatia

Solo travel to Croatia is becoming easier, with a well-honed tourist trail joining the major spots. Female travellers should feel at ease, particularly with an engrained cafe culture that offers relaxed and plentiful places for holing up with a good book or chatting to locals and fellow tourists. 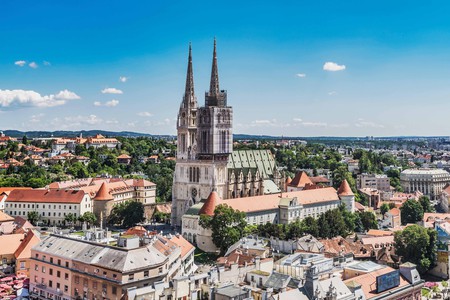 Occupying prime coastline between the Adriatic and the rest of its Balkan neighbours, Croatia is the top choice for solo travellers looking to contrast characterful cities with the rocky islands that have long been the stars of the show. Capital city Zagreb is worth checking out on an extended trip, but you’ll find a stronger flavour of traditional Croatian culture in towns such as Pula, Zadar and Rijeka – the European Capital of Culture 2020 and home to a clash of Cold War concrete relics and ornate ochre Austro-Hungarian villas.

Further west, the genteel spa resort of Opatija seduces with its Belle-Époque-era villas, while deeper south and backed by mountains lies Split, which is a tad less touristy than Dubrovnik. Split’s crowning glory is the Unesco-listed Diocletian’s Palace that wraps around the city centre, one of the world’s most impressive Roman-era landmarks.

Islands-wise, you could either head straight for Hvar – a magnet for young travellers looking to party and the mega-rich looking to moor their multi-million-euro yachts. Or give it a miss and visit islands like Vis or Korčula – both featured on Culture Trip’s carefully curated eight-day Croatia adventure.

Where to stay in Croatia as a solo traveller

Croatia could be Europe’s mecca of heritage hotels – historical buildings meticulously transformed, with all their original structure and character maintained. If you’re willing to push the boat out a bit, you could spend your nights in villas, palaces, family estates and four-star hotels. If you’re looking to keep accommodation costs down, opt for hostels and family-run B&Bs instead – most offer great value for money and are of course great sociable stopovers for solo travellers.

What to do in Croatia as a solo traveller

For a relatively small country, there’s a disproportionate amount to do in Croatia. Selecting key sights will draw you to a particular region; just don’t blame us if you end up lingering longer.

Observe art of the elements in Zadar 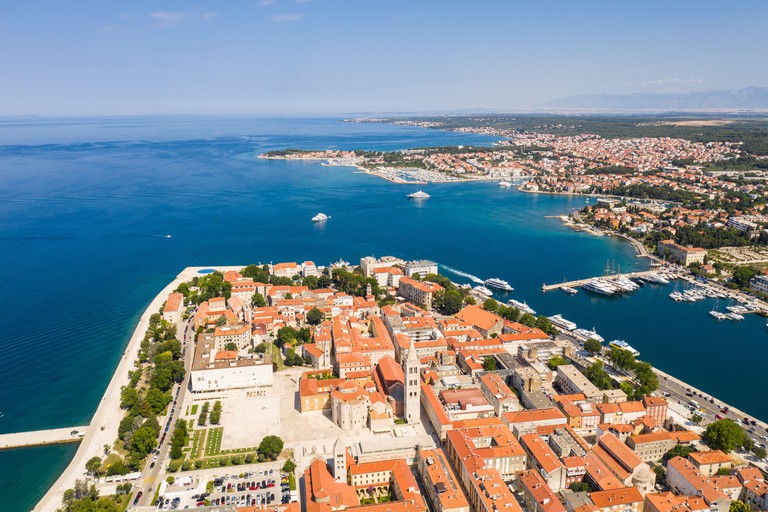 Cosmopolitan, coastal Zadar has playful architectural sites that function as art installations right on the shore. The Sea Organ is a set of steps leading into the water that harness the movement of the waves, transforming it into music. Further along, the sister installation, Greeting to the Sun, is a soporific solar-powered collection of glass plates that glow in different neon colours after sundown. Wander over to hop-scotch with other gleeful tourists or just to admire the illuminated waterfront. 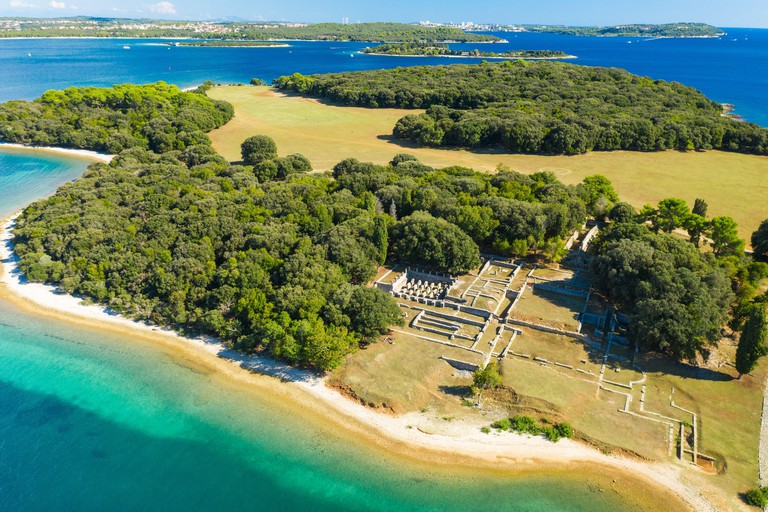 © EyeEm / Alamy Stock Photo
Take a day trip to visit the Brijuni archipelago, home to hundreds of species of wildlife, birdlife and plant life, as well as archaeological sites ranging from a Neolithic settlement and Illyrian ruins to monuments dating from the Byzantine period and the Middle Ages.

State-owned Veliki was the summer playground of Communist leader Tito, who entertained everyone from Fidel Castro to Sophia Loren – pay the island a visit and you’ll spot their photos in the teeny museum. The only residents now are the animals first gifted by visiting dignitaries, added to over the years to form a pine-backed safari park you can ride through on a tiny train. 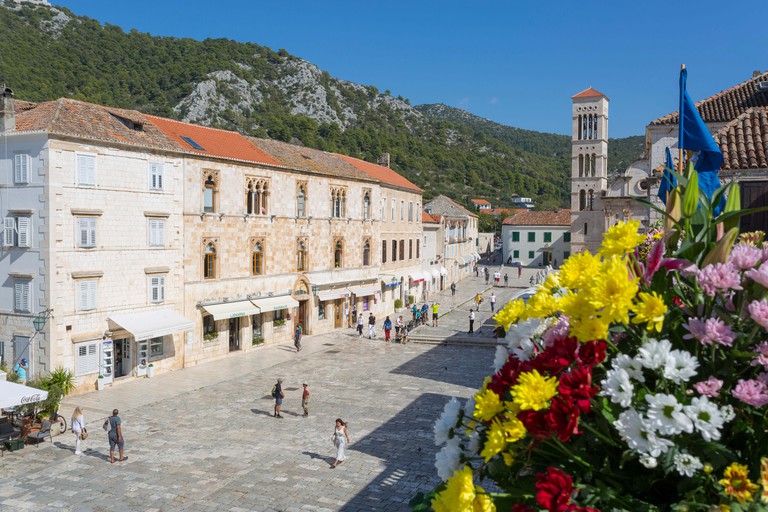 © robertharding / Alamy Stock Photo
Hopping on a ferry to sun-kissed Hvar will wrap you up in a mix of the glamour of Hvar Town, loved as much for its heady nightlife as for the curvaceous Venetian architecture and red-tile roofs contrasted against the sea backdrop. The island’s interior has its own natural beauty, from the lavender fields to the rolling vineyards cultivated by the ancient Greeks.

You can soak up the sun and the sights of Hvar as part of our eight-day adventure along Croatia’s Adriatic Coast, led by our Local Insider.

Eating and drinking in Croatia

Croatian food is as diverse and delightful as its scenery. Maneštra is a popular Istrian soup made with beans, pork and corn – and an excellent match for the region’s white Malvasia and red Teran wines. Walk into any seafood restaurant and you’ll find crni rižot – a black risotto made from squid ink – on the menu, while meat lovers must try Dalmatian pršut (cured ham), which is often smoked in juniper wood and dried in the wind. If that doesn’t whet your appetite, maybe the herbaceous sheep’s-milk cheese produced on moon-like Pag will.

For restaurant recommendations, check out our top picks for Split and the best places to eat in Dubrovnik if you’re a vegetarian or vegan. 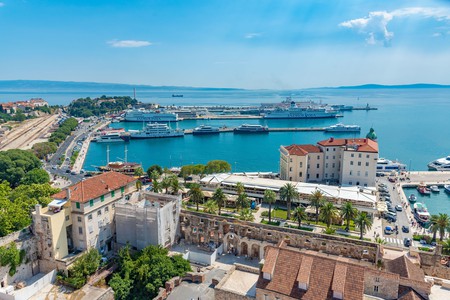 Getting around as a solo traveller in Croatia

You can travel by train from north to east, although buses are the main transport mode along the coast. For exploring the interior, you’ll need a car, which you can easily hire from all airports and some train or bus stations. Roads and toll motorways are in generally good condition up and down the country, with English-language signage and inviting bistros found along the way. Affordable ferries are the old-school way to hop around the islands, although high-speed ships also run from Split.

What to do to fit in – and not offend

Meeting people in Croatia couldn’t be more easy-going – Croatians are laid-back and welcoming of foreigners, and many young Croatians speak very good English. Don’t refuse the flavoured grappa “on the house” after a meal out – it’s the restaurant owner’s way of welcoming you to Croatia.

Solo travel doesn’t mean you have to be on your own all the time. Discover Croatia with our Local Insider and a small group of other culturally curious travellers, on our in-depth eight-day exploration of Croatia’s Adriatic Coast.