Beaches, Boat Rides and Caves: the Best Things to Do in Hvar, Croatia 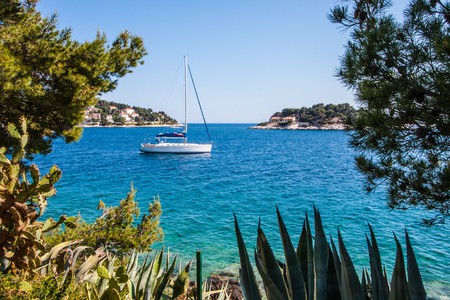 Famed for its natural beauty and party scene, the island of Hvar has become one of Croatia’s top destinations. From visiting lavender fields to exploring caves, discover the best things to do in Hvar.

With atmospheric beachside bars fringing the aquamarine Adriatic Sea and postcard-perfect hikes with viewpoints that overlook the whole island, Hvar is a picture of beauty. Indeed, Beyoncé was so inspired by the island that she reportedly named her oldest daughter, Blue Ivy, after a local tree – covered in blue ivy – that she saw here. For visitors trying to figure out what to do on the island, there are a countless number of activities to choose from, including checking out the oldest public theatre in Europe and attending the island’s annual Lavender Festival.

Although Hvar is an island in and of itself, there are also several nearby islands to explore – namely, the Pakleni, also known as the Paklinski Islands, which is a chain of over a dozen islands with several coastal inlets. Andrew Brown, a resident who rents properties to visitors, says they’re “a must” – and there’s something for everyone, whether you want to sunbathe, swim or even find a nude beach. To get to them, you can take a taxi boat to the main islands – for as little as 40 Croatian kunas (about £4.75) – or an organised tour, but Andrew has a tip: rent a boat instead.

“Rent a small boat called a pasara. You don’t need a licence, and you can explore all of the Pakleni Islands,” he says. Cost-wise, they start around 370 kunas (£44), and a maximum of five or six people can go in one boat, depending on the type of boat and which company you rent from – for example, HvarBoats. However, if you don’t want to captain the pasara yourself, skippers are also available.

As for which island to choose, Andrew’s favourite spots are on Marinkovac (just a few minutes from Hvar): Mlini Beach and Ždrilca. “The coolest bar-restaurant is Mamato,” he says. Partygoers may choose to go to Carpe Diem, a beach bar in the Stipanska area on the island, though Andrew recommends the former areas for a more authentic, less touristy experience. “The only place I wouldn’t recommend in peak season is Palmižana on the island of Sveti Klement – it’s too busy, every restaurant is expensive, and it’s kind of pretentious,” he says.

Take a tour to the Blue Cave and Green Cave

Many companies offer guided boat tours to the area’s legendary Blue Cave and Green Cave on the islands of Biševo and Ravnik, respectively. When sunlight comes streaming into the caves, the result is a somewhat ethereal explosion of colour. Although it may seem touristy, it’s a Croatia-specific experience that’ll stick with you. Many tours combine visits to other islands too, such as the Pakleni, so be sure to shop around to maximise your sightseeing day.

Explore charming island villages either by foot, scooter or car

There are many ways to explore the island of Hvar – by foot, bicycle, scooter or car – but it all comes down to your preference (and energy levels!). Mira Ćurin, president of the Mountaineering Association of Hvar Island (Planinarsko društvo Hvar), is a big fan of hiking. “I recommend a hike from Milna to Malo Grablje and Velo Grablje (and the lavender fields around it) – picturesque villages on the island – and also visiting summit Motokit along the trail,” she says. “The best view would be from Hvar’s highest summit, Sveti Nikola [St Nikola], which is 628m [2,060ft] high.”

You can reach the summit by taking one of many hiking trails. However, Mira suggests starting from Sveta Nedjelja, which is “a beautiful village to visit by the sea, and it also has a great winery and the best climbing spot on the island”. She says you can also reach it by car if you follow the macadam road. From Sveti Nikola, Mira says that you can see all the surrounding islands and mainland mountains, such as Biokovo, Mosor and Kozjak. “And one of my favourite coves is Pokrvenik – on the eastern part of Hvar island – with stunning high cliffs on both sides of the cove and a large pebble beach in the middle,” she says.

Andrew also recommends exploring more of the island of Hvar – “it is a must,” he says – and he suggests doing so by renting a scooter, bicycle or car. He, too, recommends visiting Malo Grablje, as well as Vrboska, a village often referred to as “Little Venice”.

One of the first things you’ll probably see when you get to Hvar Town is the 16th-century Španjola Fortress, set up on a hill above the city. “Španjola Fortress dominates Hvar Town and is accessible in a 15-minute walk from the main square,” says Mira. While you can check out the cannons and jail cells, you can also take in the panoramic views. “The views are really great – you can see the whole town, the busy port and the Pakleni Islands in the distance,” she says.

Partake in fjaka and local cuisine

Coffee is serious business in Croatia and forms part of a way of life known as fjaka. “Drinking coffee in bars is a complex tradition – it is more than just a coffee. It’s a kind of therapy,” says Ivana Šarić from the Hvar Tourist Board. “The taste of coffee is our wake-up call. It is also a break from work, and it’s a chance to catch up with friends and relax.” For coffee, Ivana suggests choosing a café in the main square in Hvar Town.

When you’re ready for more than coffee, you and your taste buds can explore a local restaurant. Antonjeta Rosso Domančić, a resident who rents apartments in Hvar, suggests the Black Pepper Restaurant, which is one of her favourites. She recommends the octopus stew, a 100-year-old recipe, followed by its home-made ice cream with almonds and dried figs.

Marvel at the architecture and art of Hvar Town’s churches

If you want to check out some churches in Hvar Town, the good news is that most of them are within walking distance of one another, and each one has unique touches. For instance, the Cathedral of St Stephen, the main church in Hvar that’s at the end of the main square, has altars and pulpits from the Gothic period, as well as Venetian paintings.

Pro tip: When you visit the cathedral, visit the nearby theatre, too. “If you visit Hvar Town, you should know that the oldest public theatre in Europe – which was built in 1612 – is located in the centre of the spacious St Stephen’s Square,” says Antonjeta. In 2019, it reopened after having been shut for 15 years because of renovations and is “definitely worth seeing”, she says.

Just a 10-minute walk away is the Franciscan Monastery. It’s known for its large painting of The Last Supper, but it also includes a library, museum collection – including liturgical items and collections of Greek, Roman and Venetian coins – and a centuries-old cypress in the garden.

Outside of Hvar Town, visiting the Fortress Church of St Mary of Mercy in Vrboska is an unusual church experience – not least because the building is shaped like a fort. After sustaining damage in a Turkish attack in 1571, the Fortress Church of St Mary was fortified in 1575 to provide shelter for residents in case of another attack. It once housed some Renaissance art and still makes for a great vantage point to see panoramic views of the area.

See locally made lace at the Benedictine Convent

Lacemaking forms a key part of Hvar’s cultural heritage, and today, lace is still made by nuns at Hvar’s Benedictine Convent. It opened in 1664, but the nuns did not start making lace until the 19th century. “Lace is made from young agave cactus strings, embroidered in previously prepared patterns,” says Katarina Matković, who owns Hvar’s Forko Shop, which sells handmade souvenirs. “In fact, in 2009, it made UNESCO’s List of the Intangible Cultural Heritage of Humanity.”

You can see the nuns’ work on display at a small museum, as well as purchase some to take home as a unique keepsake. As for finding the convent, when you take the stairs up to the Španjola Fortress, you will come across a church and the convent of the Benedictine Sisters, in front of which is a statue of St Benedict.

Go swimming and then watch the sunset at the beach

Of course, there are many beaches, with adjoining bars and restaurants, in Hvar Town, so it may be hard to choose which one(s) to visit. If you want a place with plenty of people-watching, Mira says you can choose any bar or café in the main square. “But Falko Beach Bar & Food – which is under some pine trees – is the best place to relax,” she says. However, Andrew’s favourite is Pokonji Dol. “It’s the best, most traditional beach – and it’s also family-friendly with a restaurant and parking,” he says. “After visiting Pokonji Dol, you can walk along the coast towards Milna, and you will find a great beach bar called Pachamama.”

Visit the stalactites and stalagmites at Grapčeva Cave

The southern part of Hvar has a special sight to see: the Grapčeva Cave, which Visit Hvar Island calls “the most significant prehistoric site in the Adriatic”. Relics from 4 BCE were discovered in the cave, and fragments from a piece of pottery that was found inside showed the oldest depiction of a boat in Europe. You can see stunning views of the sea from the entrance of the cave, and a seemingly endless number of stalactites and stalagmites once you’re inside. Just be sure to note that you can only visit the cave by taking an organised tour.

Pro tip: Mira says the now uninhabited village of Humac, which was founded in the 17th century, is a great place to check out on your way to the cave. Here, you can admire traditional stone houses, which are stellar examples of well-preserved rural architecture.

Among other things, including wine, Croatia is known for its production of lavender, and Hvar was once the eighth largest lavender producer in the world. Each June when it blooms, the island’s Lavender Festival takes place in the village of Velo Grablje, a mostly uninhabited 14th-century village with pretty stone houses. At the festival, visitors can view an array of exhibitions, workshops and concerts. “The Lavender Festival is amazing because it takes place in a village where only a few people live,” says Mira. “The village was depopulated – everyone moved to Hvar Town – but the energy and great love for his hometown of just one man, Ivan Zaninović Grande, made the village live again.” Even if you can’t make it to the Lavender Festival, be sure to take some famous Hvar lavender home with you when you visit.