Gundulićeva poljana | © Jennifer Boyer/Flickr
For all its five-star hotels, Dubrovnik is still very much an old-school community, with no giant malls or hypermarkets. Markets still play a vital role in daily life, both in terms of shopping and general day-to-day social interaction. Here’s our pick of the best.

Right in Dubrovnik’s Old Town, behind the Church of St Blaise, the main market fills the enclosed square of Gundulićeva poljana six days a week. As well as being the busiest, this is the most varied of Dubrovnik’s markets, with organic honeys, jams, herbs, spices, oils and lavenders on many stalls, interspersed with heaps of tomatoes, peppers, apples, grapes and oranges. If you look hard enough (or ask!) you may also find home-made rakija spirit and wine. 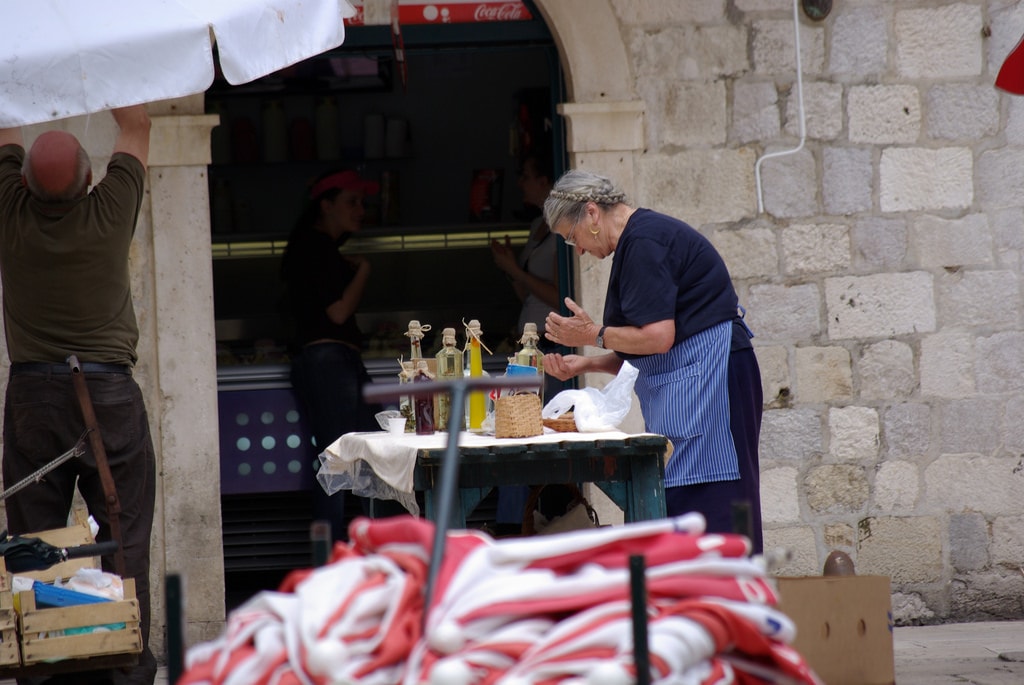 Market, Contemporary
Gruž market | © Donald Judge/Flickr
Gruž is as busy as Dubrovnik’s main market in the Old Town, only there are far fewer tourists here. It’s close to the main port and bus station, allowing vendors (and shoppers) to head over from the islands and the Dalmatian hinterland. Gruž market is very much focused on produce. Ladies of a certain age buy ingredients for soups and cakes, and–if they’re quick enough–fish for dinner. It’s worth having a look at the peasant farmers who stagger here from the Neretva Delta or Konavle, some in traditional dress.
More Info
Open In Google Maps
21 Obala Stjepana Radića, Dubrovnik, Dubrovačko-neretvanska županija, 20000, Croatia
View menu
Visit website
Visit Facebook page
Send an Email
Give us feedback

Market
Dubrovnik Christmas Market | © Donald Judge/Flickr
Advent in Zagreb has been a huge commercial success, but Dubrovnik’s far more modest version, the Dubrovnik Winter Festival, feels more homely. It’s smaller for a start, essentially a Christmas market with a tree set up on the main square of Loža, with occasional carol singers and a choral performance at the Church of St Blaise. It’s also significantly warmer – this is southern Europe, not Central, and you can sit outside in comfort by day.
More Info
Open In Google Maps
Dubrovnik, Croatia
View menu
Visit website
Visit Facebook page
Send an Email
Give us feedback

Market
Lapad is the least known of Dubrovnik’s markets, set around a small square where Mata Vodopića meets Kralja Tomislava. Like Gruž, it’s very much a resource for locals, but given its proximity to the beach, it can provide ample supplies for a family day out. The fruit will be naturally organic, and you’ll find a baker’s shop alongside to grab some fresh bread to go with the tomatoes being sold.
More Info
Open In Google Maps
Dubrovnik, Croatia
View menu
Visit website
Visit Facebook page
Send an Email
Give us feedback
Give us feedback