The 6 Best Islands to Visit Near Split, Croatia 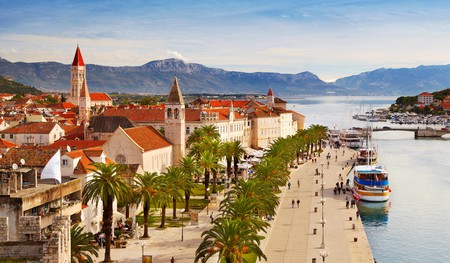 There are plenty of great things to do in the city of Split, but the delights of island-hopping are hard to overstate. With secluded coves, crystal waters and fragrant pines, the magnificent rugged landscapes of Dalmatia’s islands offer a quintessential Mediterranean escape.

A gateway to a string of Adriatic islands, Split is the ideal place to begin your island-hopping odyssey. The closest is the Unesco-protected Trogir, which boasts medieval architecture in droves, surrounded by ancient fortifications. Next along is Čiovo, with a lively marina offering seaside dining and lively bars. For variety, Brač Island provides both well-equipped tourist resorts and untouched beaches, while a shell’s throw away is Hvar, an island that brims with high-end hotels, upscale restaurants and hedonistic nightspots. But if you’re really looking to get away from it all, the southernmost island of Vis offers spectacular natural scenery at every turn.

If your visions of an Adriatic island consist of sunny beaches, blazingly blue waters and palm-lined seafronts, then Šolta is just the ticket. Conveniently located near Split, the island is best reached by catamaran – and the ride takes just half an hour. A settlement of terracotta-roofed villas splayed out across 59 square kilometres (23 square miles) of pine forests and scrubland, this teeny-tiny island offers a quieter, more relaxed experience than Split. Here, visitors revel in the gentler pace of Dalmatian life and its family-run restaurants. Be sure to sample a glass of Dobričić wine, named after the ancient red grape that’s native to the island. Šolta anchovies served in lashings of locally produced olive oil are also a speciality.

Natural Feature
Facebook
Email
Twitter
Pinterest
Copy link
Share
Map View
The most easily accessible of Dalmatia’s idyllic islands, Trogir is connected to the mainland and to the island of Čiovo by bridge, and is set 30km (19 miles) from Split. The well-preserved old town features a handsome parade of Renaissance, Romanesque and Baroque buildings, encircled by ancient fortifications. The stand-out attraction is the 13th-century Cathedral of St. Lawrence, an imposing white-stone cathedral that incorporates several architectural styles, repeatedly built upon since its inception. Climb to the top of the bell tower to enjoy expansive views of the city from its peak.
Open In Google Maps
Trogir, Split-Dalmatia County, Croatia
Visit Website
Give us feedback

Linked to Trogir by bridge, the modest settlement of Čiovo isn’t quite as architecturally impressive as its neighbour, but visitors are drawn to this island by its abundance of pebble stone beaches, stretching along 10km (6 miles) of coastline. In town, the seafront promenade buzzes with late-night bars, seafood restaurants and the occasional local club, flanked by swaying palms. Čiovo is an easy ferry hop from Split, and makes a good base if you prefer to explore the mainland from the tranquility of an island.

Like its signature beach Zlatni Rat – a swathe of pristine white pebbles that moves with the changing of the tide – Brač is an island known for the shape-shifting quality of its landscapes. The main town of Supetar features a harbour front of dazzling white buildings, constructed using the stone for which the island is famous. A transport hub with regular ferry services (and a crescent-shaped beach to sunbathe on while you await your boat), Supetar is just 50 minutes from Split, making it ideal as both a day trip or an overnight stay. The seaside resort of Bol, located next to the popular Zlatni Rat Beach, is pleasant but often crowded – tranquillity-seekers should instead take advantage of the island’s expanse of wild scenery, which encompasses secluded beaches and vast a green interior dotted with lavender fields and vineyards.

Possibly the most luxurious destination in Croatia, Hvar has long enjoyed a reputation for opulence – and indeed, hedonism. The island has experienced a tourist boom like no other, boasting swish contemporary hotels, VIP clubs and a marina packed with super yachts. A popular resort for the holidaying elite, Hvar has welcomed celebrities, film stars and even royalty to its shores. Beyond the main town, the island is a more laid-back affair, with rolling fields of pastoral land, vineyards and citrus groves. The journey time from Split is just under two hours – easily doable as a day trip, but an overnight stay is advisable.

Further out into the Adriatic, Vis was a naval military base until the 1990s, when intrepid travellers began to explore its fishing communities of Komiža and Vis Town. What they found was an idyllic outpost little changed since undercover agent Evelyn Waugh landed in 1944 on a mission to liaise with Tito at his secret hideout. Remote and idiosyncratic, Vis is now a gastronomic getaway, its key dining destinations reliant on the daily catch and locally cultivated produce. The ferry takes between 1.5 hours and 2 hours 20 minutes, depending on the route, meaning that Vis is best experienced as an overnight trip.