The 10 Best Things to Do and See in Split, Croatia

Split Cathedral | © NeilThompson/Flickr
There always seems to be something happening in Split, either along the Riva, amid the alleyways of Diocletian’s Palace, or down on Bačvice beach. This is a Mediterranean culture where people live outdoors, and discovering what’s around the next corner is most of the fun.

There’s no better place to appreciate the work of Croatia’s greatest sculptor, Ivan Meštrović, than the villa he built himself overlooking the Adriatic east of Split’s historic centre. Over two floors and a garden he also commissioned, the Meštrović Gallery displays hundreds of sculptures, plans and drawings created in the first half of the 20th century. 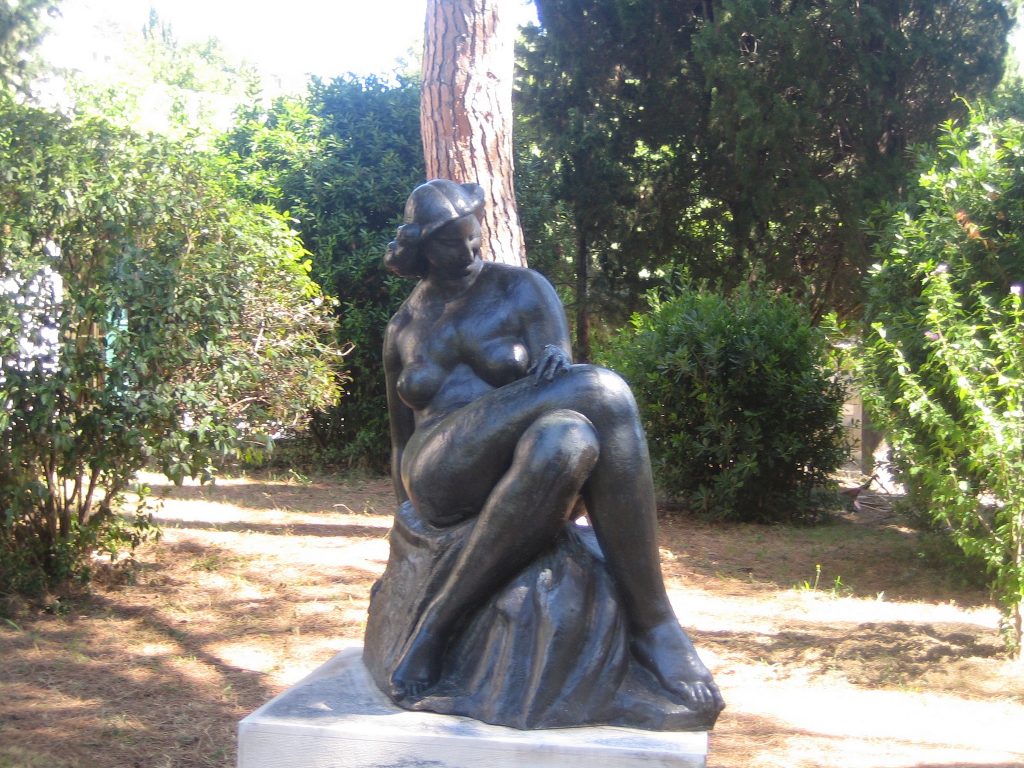 Home to a worthy, if staid, collection of rustic furniture and folksy garments, Split’s Ethnographic Museum would seem a suitable destination for historians, but a rather less essential diversion for casual tourists, if it weren’t for the view it provides. Climb the Roman-era staircase and you are granted an unassailable panorama of the tiled rooftops of Split and the Adriatic stretching out behind. Plus, by doing so, you avoid the crowds scaling the tower of Split Cathedral next door. Away from the relatively niche appeal of Dalmatian ethnography, this is like having your own private view.

Dunk and dine at the Uje Oil Bar

The recent gastronomic transformation of Split has been remarkable. Traditional, affordable Dalmatian taverns are disappearing and in their place, a new wave of contemporary, cosmopolitan bistros has swept through the town. The Uje Oil Bar is more than just bistro – it’s the wine-and-dining outlet of a local firm of olive-oil retailers. Here, with fine Dalmatian wine, first-class olive oil and fresh bread for dunking, and seasonal produce, all in historic Roman surroundings, the Mediterranean experience is complete. Superb desserts, too.

Exploring this Roman garrison is pretty much the first thing everyone does when they arrive in Split. This is not a historic monument where you queue up, pay admission, stand back and admire. The Diocletian’s Palace is the living, breathing heart of Split, dotted with scores of shops, cafés and restaurants, tucked down curious passageways and hiding in corners of enclosed courtyards. Its central square, Peristil, does merit reverent investigation – it features an original 3,500-year-old sphinx from Luxor topping one of its columns. 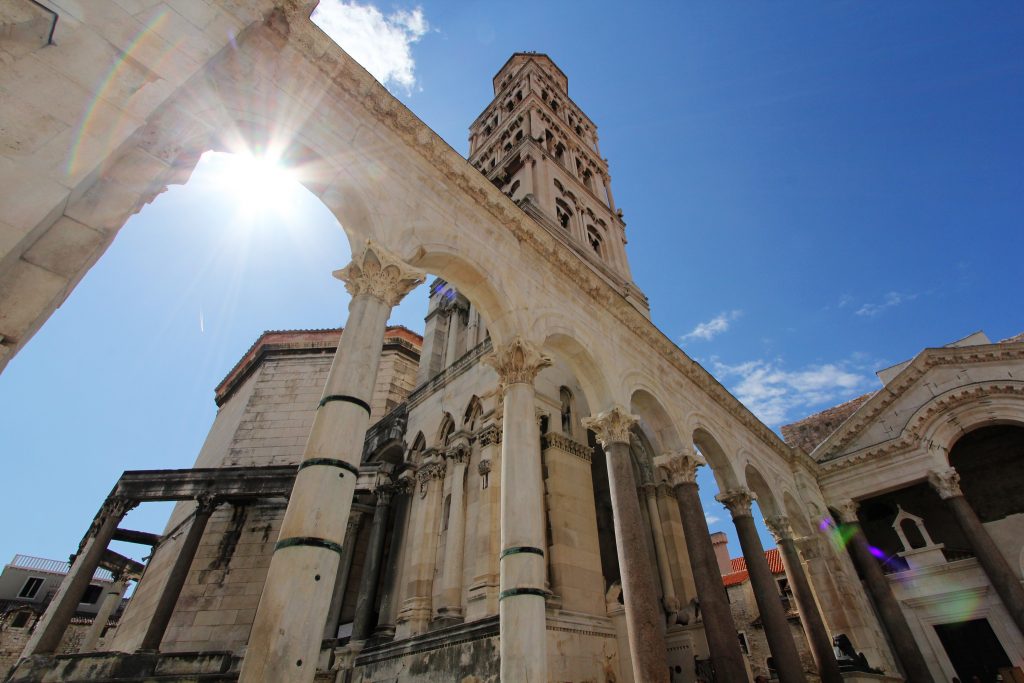 The view of Split and the surrounding sea are best enjoyed atop Marjan, the hill that towers over the twisting streets of Veli Varoš. Up there the perfect vantage point is Vidilica, a bar/restaurant whose terrace sits just before a precipitous drop delineated by a low stone wall. From an outdoor table, the waitress having brought you a glass of affordable house wine or bottle of domestic beer, you can watch the sun slowly set over the horizon, allowing for just enough light as you negotiate the steep pathway back down the hill. 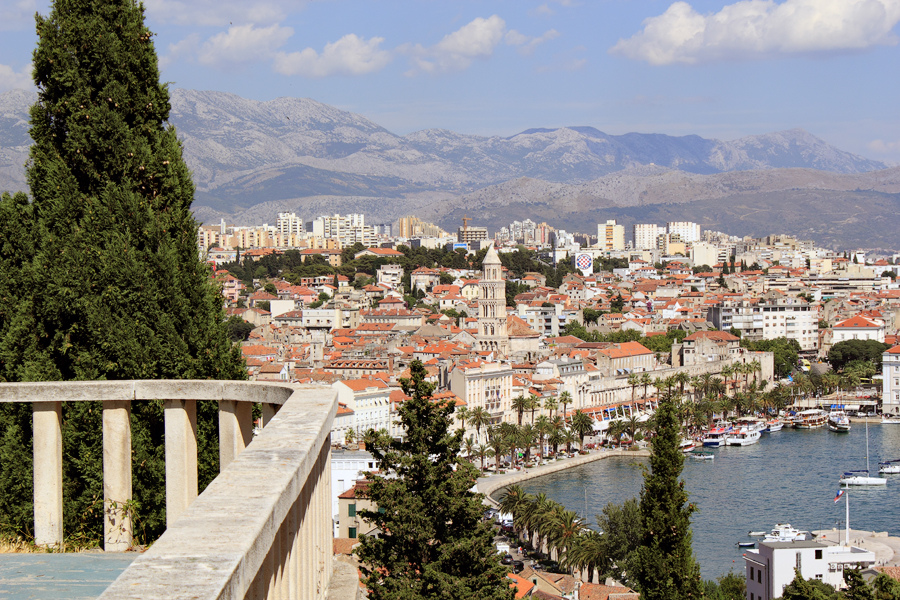 Hang at the Academia Ghetto Club

Split would be infinitely poorer without the Academia Ghetto Club. A long-term favourite hangout in the city’s historic centre, this imaginatively muralled marvel has hosted exhibitions, spun many a fine tune, and provided copious drinks for its predominately bohemian clientele for a decade or more. While a younger, perhaps less discerning crowd parties on cheap cocktails in the jam-packed passageways of Diocletian’s Palace, here a sense of space and decorum prevails. Partly it’s the courtyard garden, partly it’s the fact that the AGC attracts grown-ups who still want to have fun without falling over doing it. 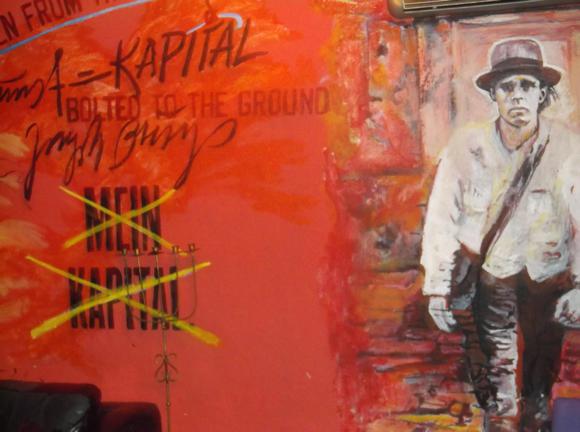 Cathedral
View from Cathedral bell tower | © brownpau/Flickr
In the heart of Diocletian’s Palace, the Cathedral of Saint Domnius may appeal to those interested in ecclesiastical architecture but it’s the separate bell tower that brings in the crowds. A curious mix of styles, it rises over the city’s historic centre for six storeys and the dizzying climb up is rewarded with fabulous views for miles around.
More Info
Open In Google Maps
5 Ulica Kraj Svetog Duje, Split, Splitsko-dalmatinska županija, 21000, Croatia
+38521345602
View menu
Visit website
Visit Facebook page
Send an Email
Give us feedback

Splash out at Adriatic Grašo

For that one big holiday blow-out, Adriatic Grašo ticks most boxes. Stupendous sea view: tick. Quality fresh fish, done how you’d like: tick. Lamb, veal or beefsteak if you’re all fished out: Tick. Delicious choices of sides, salads and desserts? Tick. Even a metre-long pizza for family sharing? Again, tick. Service is first-class, ditto the wine. For those using the occasion to pop the question, the Grašo takes credit cards.

If the Diocletian’s Palace is the heart of Split then the seafront promenade of the Riva is its face. Created in Napoleon’s time, the Riva has been Split’s shop window for 200 years. The Riva is where Spličani stroll, pose, meet, greet, chat, interact, sit, watch and, most of all, take coffee. Initially greeted with horror, its revamp of 2007 has become accepted, the row of LED lights and regular line of palms now the backdrop to the age-old tradition of the early-evening passeggiata. 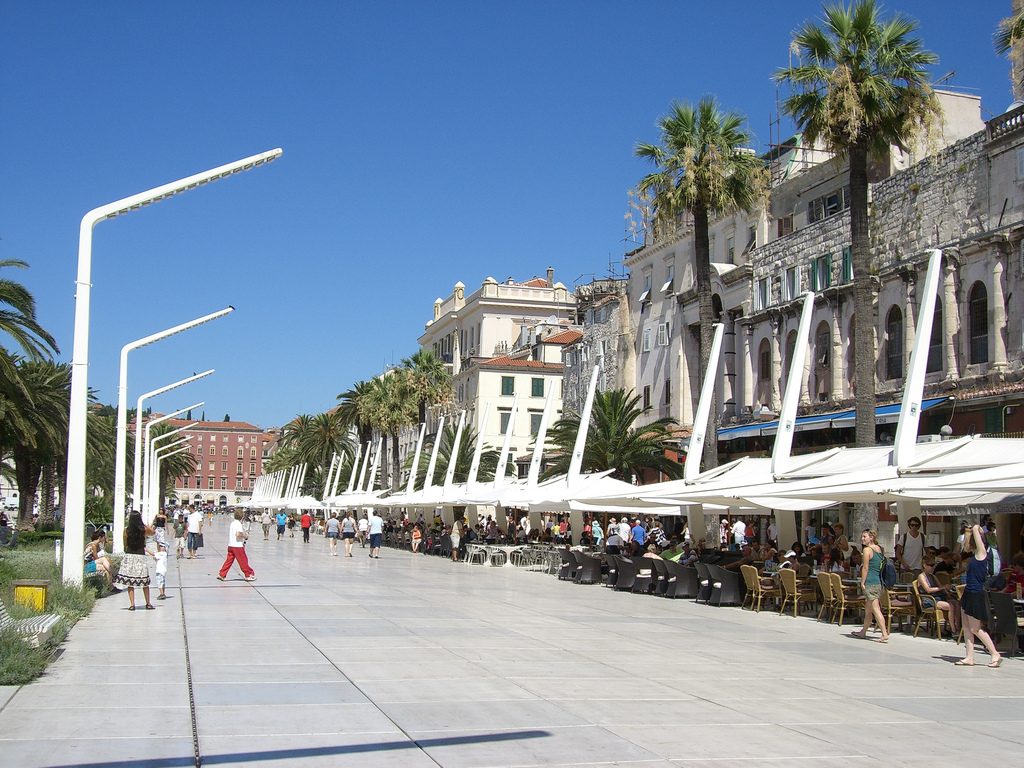