How to Spend 7 Days Island Hopping Around Split, Croatia 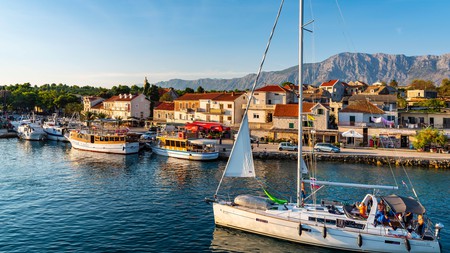 Vibrant medieval towns and ancient fishing villages – this region of Croatia really does have something for everyone. Rarely far from dry land, you can make several stops each day, or pick a channel to challenge your sailing skills. Some of the region’s highlights include Vis, notable for its wartime history, the lesser-known island of Šolta, and Korčula island, with its futuristic marina. Here we reveal how to pack these all in, and more, on a seven-day sailing trip.

Hop between Croatia’s islands by chartering a boat through SamBoat.

Day one: Seget Donji to Maslinica, on Šolta island 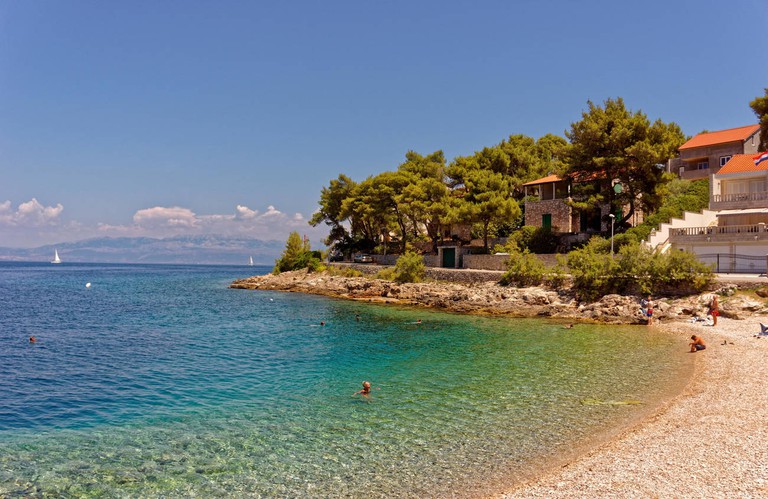 Pick up your yacht from Marina Baotić in Seget Donji, just a short drive from the Unesco World Heritage site of Trogir. One of Croatia’s newer marinas, Baotić’s facilities include boutiques, a supermarket, a pizzeria, a fuel station and a swimming pool. Make sure you arrive in Maslinica well before sunset as you’ll not want to miss the solar spectacle this west-facing bay offers, and you’ll probably want a delicious cocktail in your hand too. This evening you’re berthing at Marina Martinis Marchi, attached to the beautifully restored Martinis Marchi Heritage Hotel. Treat yourself to an elegant dining experience at the hotel, or wander around Maslinica where you’ll find a range of dining choices. Time really has stood still on Šolta and one of the best ways of experiencing island life is with an olive oil tasting tour from an organisation such as Olynthia.

Day two: Maslinica to Uvala Vinogradišće, in the Pakleni islands 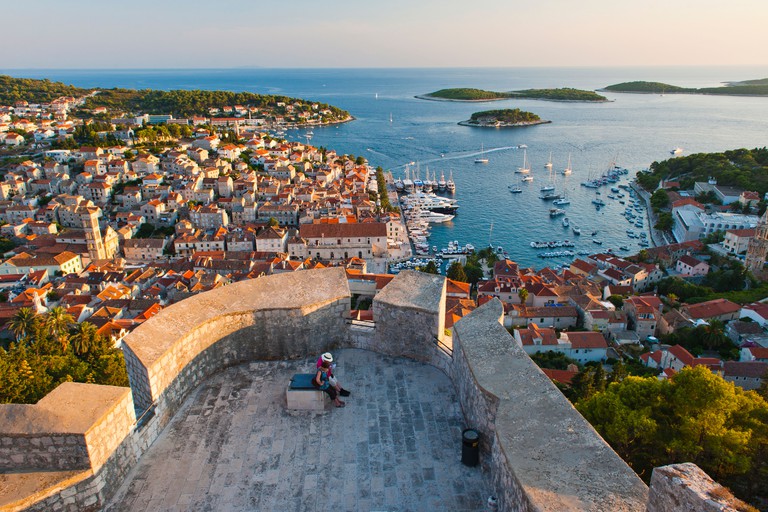 Uvala Vinogradišće is a popular anchorage, especially in the height of summer when Hvar town’s nightlife is in full swing. ACI Marina Palmižana is an easy walk over the hill, as are a choice of restaurants, most with spectacular views. Try Laganini Lounge Bar and Fish House for dining in style or, for fresh local delicacies in a colourful setting, surrounded by plants and local arts and crafts, Meneghello Palmižana restaurant. Take a water taxi from the marina to Hvar town, rather than trying to compete with the super-yachts for moorings in the bay. Overlooked by two Venetian fortresses, the town centre is a tasteful mix of old and new. Home to Croatia’s oldest theatre, it also claims to have one of Thomas à Becket’s fingers in a glass bell in the church. 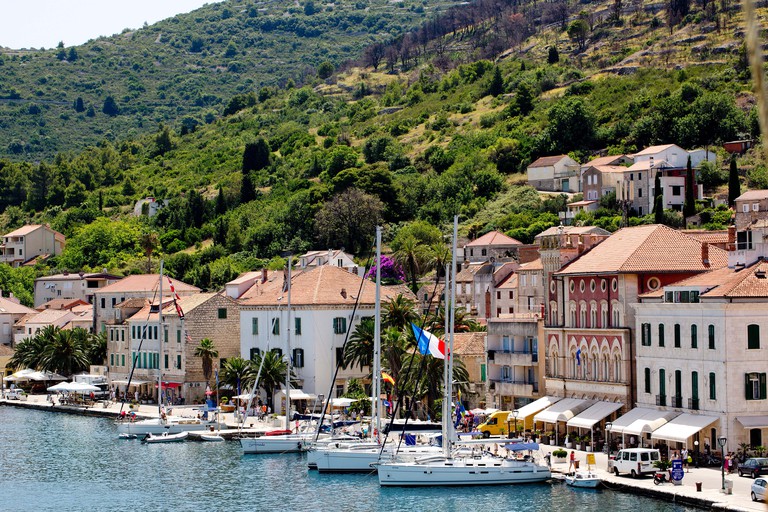 Vis was one of Croatia’s most strategic military outposts, ex-President Tito’s stronghold during the World War II and the last island to open up for tourism after the war, so it’s changed less than elsewhere. The two main settlements are Vis town, to the north, and Komiža on the west coast. You can berth in both harbours but we recommend the more sheltered Vis town harbour for an overnight stay. Buses run between the two settlements and are scheduled to link up with the ferries. Komiža is a picture-perfect traditional fishing village: the ceremonial burning of an old wooden sailing boat takes place annually on 6th December to mark St Nicolas’s Day, the patron saint of travellers, sailors and fishermen. It’s also the base for popular excursions to the Blue Cave on Biševo island. In contrast, Vis town developed around agriculture, and the landscape is dominated by vineyards. The Kut area is full of great restaurants and impressive stone villas. 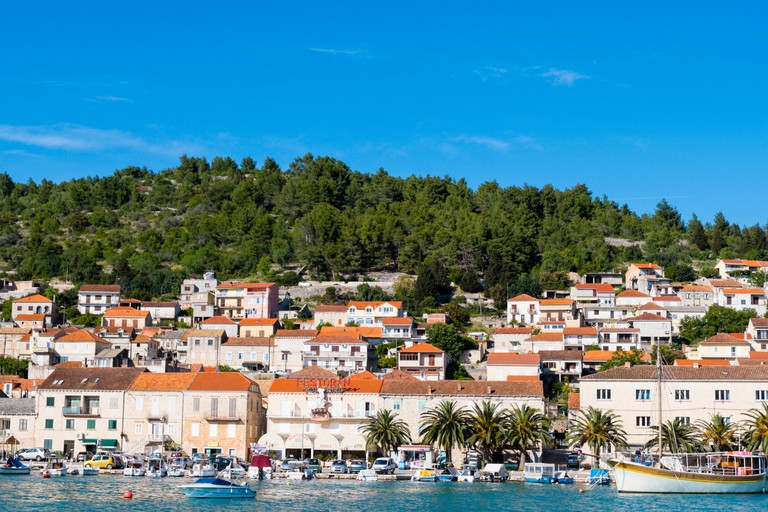 Vela Luka is a good jumping-off point for local scuba diving spots | © Peter Forsberg / Alamy Stock Photo
Somewhat in the shadow of Korčula town, at the opposite end of the island, Vela Luka has plenty of charm of its own. Not least, it has one of Croatia’s newest marinas with unusual curved breakwaters. Marina Korkyra is on the east side of the bay, by the hotel of the same name. You can also anchor further into the bay. Vela Luka has a good range of shops and facilities, a busy street market and a fascinating Cultural Centre. Among many other intriguing exhibits, the centre is the unusual custodian of two Henry Moore sculptures and the home of important archaeological finds from nearby Vela Spila, inhabited in Neolithic times and described by scientists as the cradle of western civilisation. Vela Luka is also unique for the mosaics that dominate the town centre. The artworks were originally created in 1968 and installed fifty years later as part of an international art project. It now claims to have the world’s longest mosaic, and there’s more to come.

Day five: Vela Luka to Lovište, on the Pelješac peninsula 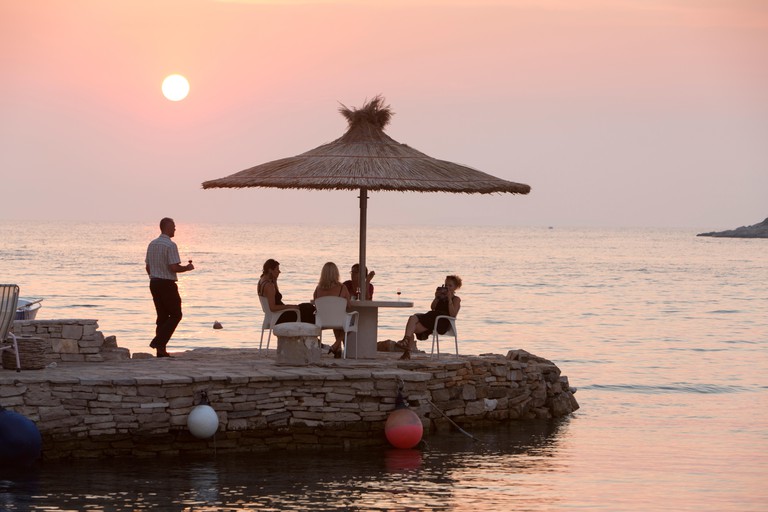 There’s time today to see a bit more of Vela Luka before you head off to the fishing village of Lovište, on the tip of the Pelješac peninsula, one of the largest and safest anchorages in the area. It also has one of Croatia’s best, and rare, sandy beaches. There’s a handful of bars and restaurants in Lovište and another couple around the bay at Mirce and Runca. Source some local figs, almonds and carob ashore and lie on the beach and relax. Look out for the local wines too – in a country known for its good wines, those from Pelješac are considered amongst the best and include Postup, Dingac and Plavac Mali. 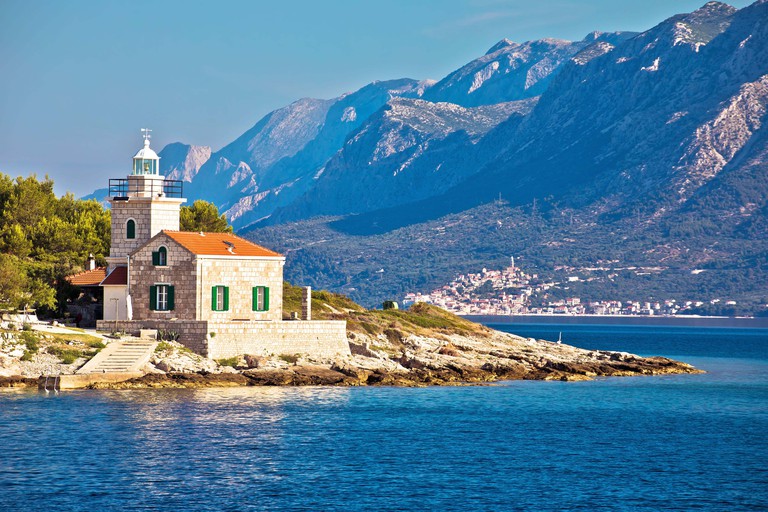 It's possible to rent out Sućuraj lighthouse for a longer stay | © Dalibor Brlek / Alamy Stock Photo
It’s inconceivable that you’d want to sail right by Sućuraj, on Hvar island, without stopping there for an hour or two. Where Hvar town has history, architecture and celebrity, Sućuraj, at the other end of the island, has a simple charm. With the help of the mainland mountain backdrop, it’s also one of the most photogenic coastal villages in the area. You can berth on the inner side of the breakwater while you choose from a handful of good restaurants, or top up supplies at the supermarket and shops.

Back on your yacht, as you head towards Pučišća on Brač island, you’ll pass the Makarska Riviera on the mainland, with its many pebble beaches. As you approach Pučišća you’ll see the quarry for the white stone that Brač is internationally famous for; all around town, you’ll see Renaissance palaces, baroque buildings, street furniture and sculptures made from it. There are plenty of berths around the harbour, all the essential shops and facilities, and it’s a short walk to the best beaches. Be prepared, though, for loud church bells!

Day seven: Pučišća to Seget Donji, via Split and Trogir 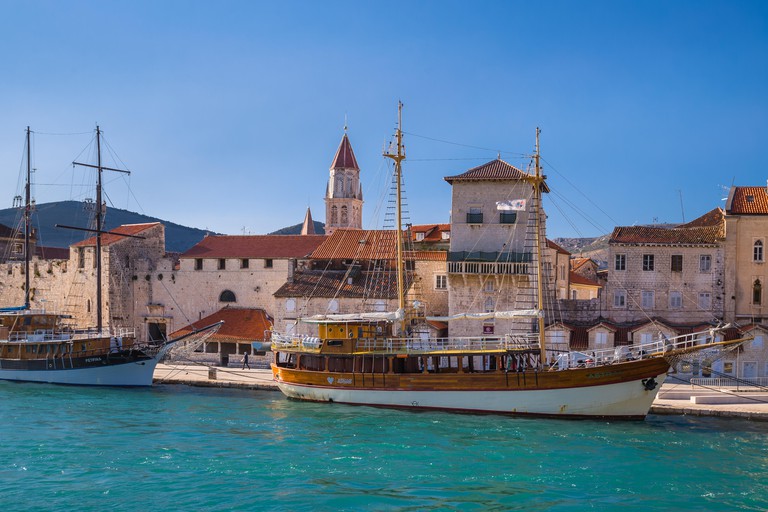 Trogir's cobbled old town is a delight to get lost in | © Ian Furniss / Alamy Stock Photo
You really don’t want to miss either Split or Trogir but berthing and mooring opportunities in the centres are limited. The best option for a short stop in both is the ACI marinas. However, you’ll get a great view of the best bits of Split if you pop into the bay and have a look around, watching out for the numerous ferries of course. Straight ahead of you is the Palace of the Roman Emperor, Diocletian, a vast shell of a building, alive with boutiques and restaurants. In front of that is the town’s Riva (seaside promenade), lined with cafes, controversial street furniture and paving stones. Just before the main bay is a smaller bay and an area known as Bačvica, popular for its family-friendly, sandy, gently sloping beach, where you’ll often see youngsters engaged in the acrobatic game of picigin.

After Split, is the enormous Kaštela bay, with its seven villages originating in the 15th and 16th centuries, each with at least one castle. Kaštela bay is also the best way to get a good view of Trogir and access the moorings at its town wall, normally full of super-yachts, but then you’d have to backtrack and go all around Čiovo island to get back to Marina Baotić, so perhaps go there by land, after you’ve returned your yacht. You won’t be disappointed by this medieval, walled Unesco World Heritage site, situated on its own island and connected to the mainland and Čiovo island by road bridges.

Vis is well worth the extra hours of sailing to get there but if you’d prefer to stay closer to the mainland, cut out Vis and spend more time around Brač and Hvar. For example, on Hvar, Vrboska is known as Little Venice because of its bridges, and the more stately Stari Grad has the Unesco World Heritage Stari Grad Plain – an almost entirely preserved agricultural landscape, set up by the Greeks in the 4th century BCE, but still in use.

You’ll need the appropriate qualifications to skipper a charter boat yourself, and even experienced, qualified skippers sometimes find they get more out of their trip by using a local skipper.

The marina network is extensive and there are local harbours for smaller boats in most bays. Visiting yachts can often find space in the bigger town ports. In nearly all marinas and most of the quays and ports that regularly accommodate nautical visitors, berthing is stern- or bows-to on “lazylines” (lines attached to the shore at one end, which you pick up with a boat hook, and which run to a concrete block underwater behind where your stern will end up once you have moored), a version of Mediterranean Mooring. Otherwise, there are now buoys in most bays, many operated under concession, and so, wherever you stop, especially in summer, you will normally have to pay a fee, or at least eat at the restaurant that has laid down berths or buoys in the less inhabited bays. The National Parks also charge a fee to enter.

Whilst tides are negligible, currents can be strong in some areas and, with all the islands, islets and reefs about, it’s particularly important to navigate carefully. Pay regular attention to the weather forecasts too, and particularly look out for the bora wind from the northeast, which, although rare in summer, can arise suddenly without warning and gust fiercely. We’ve chosen marinas or the best-protected bays as overnight stops, but if you’re trying somewhere else for lunch or a swim, it’s best to avoid bays exposed to northeasterly winds.