A Guide to Croatian Christmas Traditions 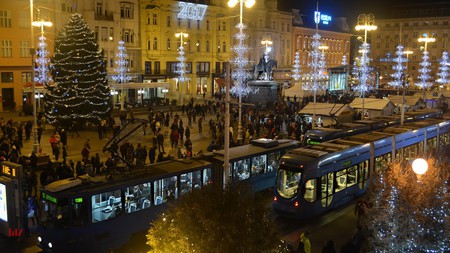 With close to 90% of Croatians identifying as Catholic, it’s no surprise that Christmas remains one of the most important holidays. Historian Andrej Chvala gave Culture Trip the lowdown on the most significant and intriguing Croatian Christmas traditions.

Makovnjača (poppy seed rolls), Christmas trees and candles are all staples of Christmas in Croatia. Even though celebrations officially start on Christmas Eve and last for 14 days, in reality the festivities run on a different schedule: as soon as December arrives, the holiday season kicks off. Homes are decorated, public squares are adorned in glittering decorations, and the air is filled with Christmas carols and the smell of mulled wine spiced with cinnamon and cloves.

Zagreb-based historian Andrej Chvala shares his insights into the meaning of Christmas traditions, which reflect Croatia’s history and culture.

Officially starting four weeks before Christmas, Advent marks the beginning of the holiday season. It is traditional to make (or buy) a wreath of evergreen branches or straw, on top of which sit four candles. With each passing Sunday during December, families light another candle, traditionally during the Sunday lunch. According to Chvala, the wreath symbolises eternity, while the candles stand for different emotions. “The first candle is lit for hope, the second one symbolises peace, the third one stands for joy, and the last one represents love,” he says. ‘‘Since religion plays a big role in the life of Croats, this [Advent] period is particularly important. Early morning masses are held, and prayers are solemnly chanted. Generally, people spend much more time with family and close friends’’, Chvala explains.

Rather than Christmas day itself, the 13th of December was traditionally when children received gifts, delivered by St Lucia (though today many children get presents on St Lucia’s Day, St Nicholas’s Day and 25 December!). Wheat is also sown on this day as a symbol of life. Chvala explains the roots of this tradition: “It dates back to times when agriculture was the main economic activity,” he says. According to Chvala, the belief is that the taller the wheat grows, the more prosperous the year to come will be. ‘‘In some parts of Croatia, people observe the wheat each day until Christmas. It is believed that the weather of each month in the upcoming year will mirror the weather on each of the days in the period from St Lucia to Christmas,” he explains.

Marking the end of Advent, Christmas Eve is a special time when, traditionally, families gather together in the final preparations for Christmas Day. Christmas trees are set up and decorated, cakes are made, and the Christmas wheat from St Lucia’s Day is tied with a colourful ribbon. ‘‘The colours of the ribbon – red, white, and blue – represent the colors of the Croatian national flag,” Chvala explains. ‘‘In ancient times, a log was traditionally lit and sprinkled with wine by the father of the household. It is believed that the log, called badnjak in Croatian, needs to burn all the way through to Christmas day as a symbol of light on the night of Christ’s birth,” he adds. In the evening, Croats visit local churches, attend Midnight Mass, and greet each other with “Sretan Božić” – (Merry Christmas).

In Croatia, Christmas is celebrated in a similar way to other countries in Eastern Europe. Gifts are exchanged upon waking up, after which a family breakfast is served. Many families will attend a Christmas mass at a local church. “In contrast to the festive excess of previous days, Christmas day is spent in a relaxed manner. Traditionally, it is a family day revolving around food and spending time with loved ones,” Chvala notes.

With meals are perhaps the most highly anticipated aspects of a Croatian Christmas, the holiday period merits a specific memu. While Christmas Eve is a fasting day, Christmas Day is all about the food, and particularly meat. The most common dishes on Christmas Eve are fairly light, such as cod, salted sardines, potatoes and salads. On the other hand, on Christmas Day the table is overflowing with a combination of roasted turkey, duck or goose, accompanied by sarma, cabbage rolls filled with rice and minced pork meat. In some regions, it is common to make a beef stew, homemade mlinci (flatbread pasta), or roast suckling pig served with a mix of veggies.

“Even though there are plenty of ingredients on offer, here Croats stick with the basics: nuts, raisins, honey, and chocolate,” Chvala says.

‘‘Even decorating a Christmas tree was not a custom until the mid-19th century, when it became widespread in Croatia thanks to German influence,” the historian explains, adding that “before that, homes were decorated with flowers, fruits, and paper ornaments.’’

According to Chvala, evergreen trees were introduced even later, deciduous trees used at first. ‘‘Although the Christmas tree is considered a Christianised pagan tradition, some believe that it represents the one who always remains, regardless of all changes – Christ.’’ In addition to the aforementioned wreath and wheat, Croats decorate with licitar hearts (hand decorated cookies made of sweet honey dough), candles and Christmas nativity scenes. ‘‘While candles are a symbol of the joy and light that Christmas brings, straw is brought into the house as a reminder of Christ’s original manger,’’ he adds.

Also known as the Holy Three Kings (Sveti tri kralja), Epiphany represents the end of the Christmas season. On this day, the Christmas tree and all the decorations are taken down.

‘‘Some places have a tradition of sending groups of three boys called zvjezdari (star men, referring to the cardboard star of Bethlehem they carry) from house to house giving out presents,’’ Chvala says, adding that these heralds of the end of the season sometimes sing carols as they go.