Croatia on Two Wheels: A Bike Tour of Split 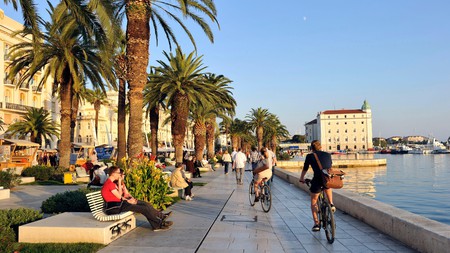 The days of Split being a cycling nightmare are over. Exploring on two wheels offers visitors the chance to see a different side to the Dalmatian capital, all the while keeping their carbon footprint in check.

It might sound somewhat contradictory, but one of the great advantages of exploring Split on two wheels is that the narrow streets and winding alleys of Diocletian’s Palace should be off-limits. With the city’s greatest attraction out of the conversation, the rest of Croatia’s second-largest city becomes ever more inviting. Getting around town on two wheels requires a smidgen of cycling proficiency and a basic understanding of the rules of the road. You’re going to have to be prepared to share space with cars, buses and mopeds every now and then. The rewards are plentiful, however: on a one-day cycling tour of Split, you can expect to discover local football culture, beaches and one of Croatia’s greatest artists.

Bikes can be rented from a number of places in and around Diocletian’s Palace with more options opening up all the time, along with a couple of options near the gates of Marjan Hill. Memento Travel Agency remains the best bet for renting bikes in town, with an easy to find location just inside the Zlatna vrata (Golden Gate) and plenty of information for anyone looking to explore the wider edges of Split and its surrounding towns. You can expect to pay anywhere between £8.40 and £12.50 for a full day’s rental. Worth it? You bet.

Grab a coffee, rent a bike, hit the beach (in that order)

The best way to start the day in Split is with a steaming hot cup of coffee, and it doesn’t get much better than D16. These guys have been at the forefront of the Dalmatian coffee revolution for years, paying homage to the region’s history of caffeine-fuelled invention while focusing firmly on what matters today. D16 also happens to be within spitting distance of Memento Travel, so finish the coffee and head to the agency to rent your trusty steed for the day.

From Memento, it is just a short ride (1.3km, (0.8mi) to be exact) to Bačvice Beach, one of the most popular in town. Morning is the best time to hit the sand, as you’ll likely have it to yourself and won’t have to fight for space. Take in the sea and maybe even enjoy a dip, but get back on the saddle soon enough. Continue 3km (1.9mi) south towards Žnjan beach, the largest in the city. Soak it in, because things are about to get a little more challenging. 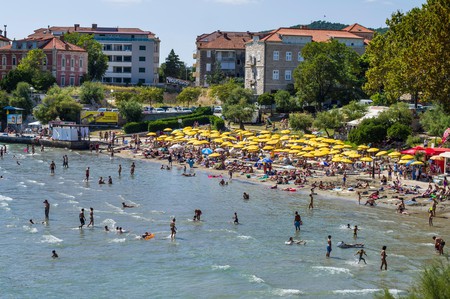 Before Split, there was Solin

Diocletian might be Split’s most famous son, but the great Roman emperor was actually born in nearby Solin, located 6km (3.7mi) northeast of the city. Solin was built on the ancient city of Salona and its archeological remains can be explored today, although many visitors miss it due to its distance from the city centre. Make the most of your bike and follow the pedestrian route from Žnjan before joining the big road on Ulica kralja Stjepana Držislava, which eventually carries on onto Ulica Zbora narodne garde, from which point Solin is fairly well signposted. Nearby is a cemetery for gladiators killed in the arena, another grisly reminder of how brutal Roman life could be. The seven charming villages that make up Kaštela are just a few extra kilometres north if you happen to be feeling particularly energetic. 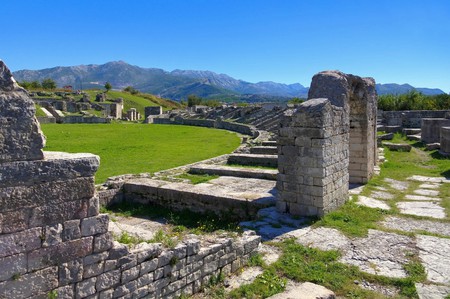 Solin was built on the ancient city of Salona, and you can still check out the ruins today | © LianeM / Alamy Stock Photo

From Solin, head back towards Split but take the long way round, stopping off in the village of Vranjic first. Nicknamed ‘Little Venice’, Vranjic was actually a getaway for the high and mighty of Solin, a chance for the wealthy to get out of the city and relax. Take a selfie with the Angel Raphael statue and stop for refreshments at the Begi Workers Bar, before continuing on your way.

Split is football mad. Hajduk Split might not be as successful in the modern age as they would like, but the club and its hardcore fans (known as Torcida) are among the most passionate and loyal of any on the planet. In fact, Torcida is the oldest football supporters group in Europe. A ride around the northeastern edge of the Split peninsula will take you to Stadion Poljud, known locally as the Poljudska ljepotica (Poljud Beauty). Nip into the stadium and the club shop to pick up a souvenir; you might even get a free tour of this famous stadium.

Fill up by the sea

While most of the city’s best restaurants are found in and around Diocletian’s Palace, there are plenty of excellent options further away from the centre. Restoran Re Di Mare is one such spot, serving traditional food and Italian options with a charming ambiance and quiet confidence that cannot be manufactured. Re Di Mare also offers some seriously gorgeous views of the sea. What more could a diner want?

Get to know Croatia’s finest sculptor

Once you’ve refuelled at Re Di Mare, get back on the saddle and cover the last great distance of your day. The Ivan Meštrović Gallery is just across Marjan Hill from the Re Di Mare, with the route around the hill taking you through plenty of too-often-ignored streets showcasing everyday life and street art in abundance. Bypass the Marjan Hill stairs and head on to the gallery, a great homage to one of southern Europe’s most prolific sculptors. The villa in which the gallery is housed is impressive enough, but it is nothing compared to the genius that hides within. The gallery will also give you a chance to stretch your legs before you attack the last challenge of the day: Marjan Hill. 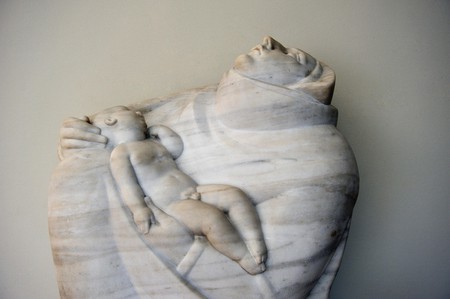 If you’re looking for the best sunset in Split, you’ll find it on Marjan Hill. This magnificent, verdant spot to the west of Split’s centre is roughly the same size as New York’s Central Park and is the most popular place for embracing nature in the city. Gorgeous walks eventually take visitors to the most breathtaking view of Split. Cycling the hills is one of the city’s great experiences, and the vehicle restrictions means relative peace from traffic is assured. 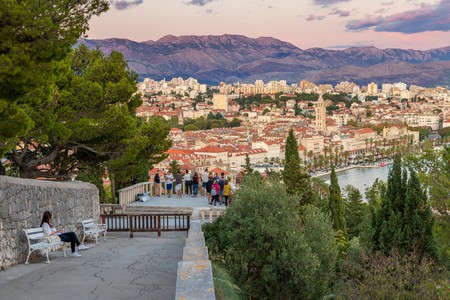 With your bike safely back at Memento, use your last bits of energy to walk the short distance to Marvlvs Library Jazz Bar, one of the finest wine bars in the entire region. Books, live music, friendly service and some seriously good drinks await, as the stories from a day of cycling flow out. Where better to tell a story than the birthplace of Croatia’s great renaissance writer, Marko Marulić?