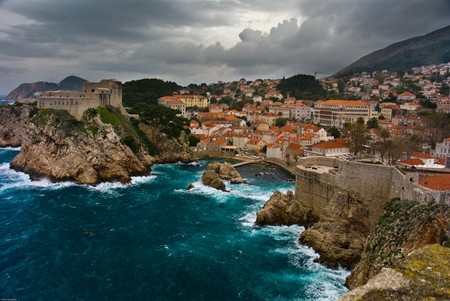 Dubrovnik is a city with history carved into every street corner. There’s a bounty of iconic attractions contained within its walled perimeter, and the best way to familiarise yourself with this ancient city is to explore the town on foot. Here are some of the essential architectural landmarks to navigate by.

Built in 1537 and designed by artist Paskoje Milicevic, the Pile City Gate marks the entrance to Dubrovnik’s historical Old Town. It is comprised of two enormous stone arches built in the Gothic style, which connect to a wooden drawbridge that provided defence over a now dry moat. During the maritime republic of Ragusa (1358-1808), the drawbridge was ceremoniously hauled up each night using a complex system of pulleys and counterweights, before the city keys were handed to the Ragusan head priest. Nowadays, the gates remain permanently open to visitors wanting to cross a beautifully preserved piece of Dalmatia’s history. The Pile Gate also doubles as the entrance to King’s Landing, in the wildly popular HBO series ‘Game Of Thrones’. Nishta is a great vegetarian stop-off if you get peckish, and D’vino Wine Bar is perfect for a post-sunset tipple. 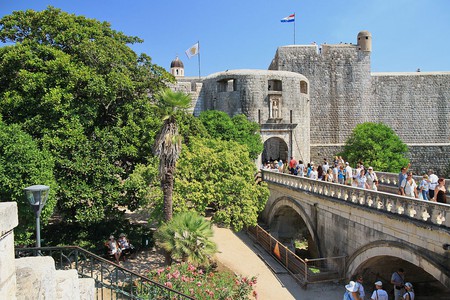 Defending the Pile Gate, as well as the Western sea approach, is the magnificent Bokar Fortress, designed and nearly completed in the 1460s by the pioneering Italian Renaissance architect Michelozzo di Bartolomeo Michelozzi. However, construction was not finalised until 1570, after a century of debate as to whether finishing the project was necessary, and this incarnation is what you see today. Almost perfectly cylindrical in shape, it is said to be the oldest casemented fort in Europe (a fortified structure from which guns are fired), and offers unparalleled views of the Adriatic on a starry night.

The Franciscan Monastery Complex, situated to the left of the Pile Gate, contains a monastery, a church, a library and a pharmacy. It is actually the second Franciscan monastery to be built in Dubrovnik, after the first was deliberately destroyed in 1317 when war threatened the city. Though construction began the same year, it took centuries to complete, and the finished result is a multitude of architectural styles, including Gothic, Renaissance and late Romanesque. Though the church was all but destroyed in 1667 by a devastating earthquake, other parts of the complex remain not only intact but still functional. The library, built in the 17th Century, contains over 20,000 books, among which are 1,200 original manuscripts that have shaped Dubrovnik’s history. The pharmacy has remained in use since 1317, making it the third oldest functioning pharmacy in the world. While visiting, be sure to explore the monastery museum collection, located through the cloisters. 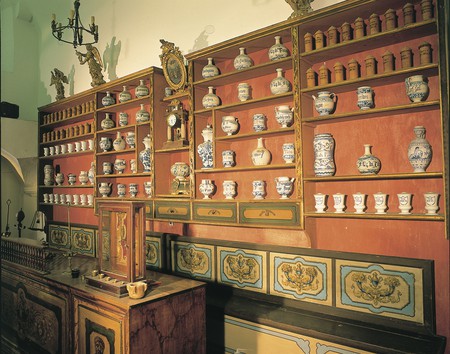 Built between 1438 and 1440 by Onofrio Della Cava, and situated opposite the Church Of Holy Salvation, Onofrio Fountain is one of Dubrovnik’s most famous landmarks, and a spectacular sight to be greeted by as you enter through the City Gates. A huge central dome plays host to sixteen water taps around its circumference, with the surrounding steps making for an ideal resting spot in the afternoon heat. The fountain was designed to channel water from an aqueduct 12km away, which had an enormous impact on a city that had previously suffered great water shortages due to long, dry summers. The same water still flows through its taps and remains drinkable. Despite being badly damaged during the great earthquake of 1667, Onofrio Fountain still stands as a great testament to human ingenuity. 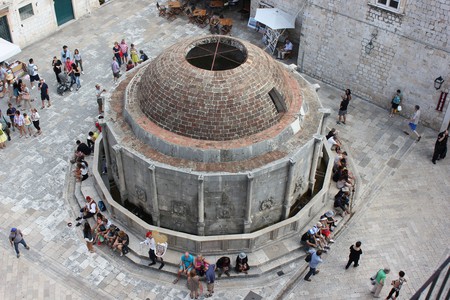 The rectangular Sponza Palace is one of the only historical structures to remain completely unaffected by the aforementioned earthquake of 1667. This stunning Gothic-Renaissance building was designed by Paskoje Milicevic Mihov and constructed between 1516 and 1522. Over the centuries, Sponza Palace has served as a vessel for many public venues, including a mint, bank, treasury, armoury and school. However, it is arguably now that the palace fulfils its most important function to date; that of playing host to the city’s archives. Containing 100,000 individual manuscripts and 7,000 volumes, Sponza Palace ensures Dubrovnik’s cultural heritage is well preserved. 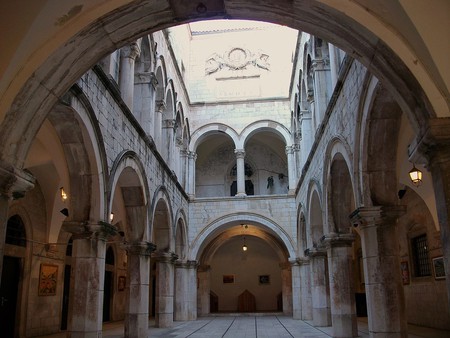 Between Sponza Palace and the Church Of St. Blaise stands a stone column, within which has been carved a sentinel armed with sword and shield. This statue represents the freedom of Dubrovnik, and the flag of the Republic is always hoisted above the column during ceremonial events. Carved by Antun Dubrovčanin and Bonino di Milano in 1418, the figure depicts Orlando, a hero of Dubrovnik who is said to have helped liberate the city from a siege of Arab pirates in the 8th Century. While the legend has been proved to be false, the relevance of the statue is ingrained within Dubrovnik’s history, as the small podium above the figure was a platform from which public proclamations were made. Nowadays, Orlando’s Column plays a significant and ritualistic role in the opening and closing of the Dubrovnik Summer Festival. 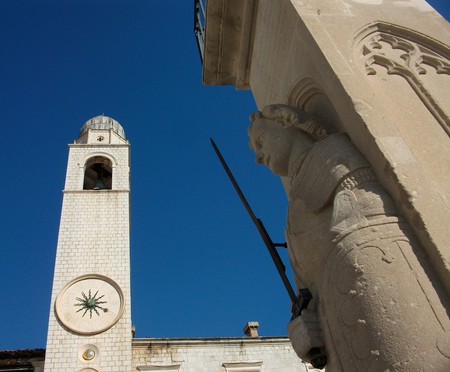 The Church Of St. Blaise

The Church Of St. Blaise is a well-loved religious building, with St. Blaise being the patron saint of Dubrovnik. Designed in the Baroque style by Venetian architect Marino Gropelli in 1715, it stands on the foundations of a Romanesque medieval church that was destroyed following a terrible fire. Gropelli also carved a statue of the eponymous saint, who safeguards the church entrance while holding a miniature of the city in his palm. The interior is intricately designed and exquisitely decorated, and provides wonderful photo opportunities. A gild statue of St. Blaise, adorning the altar, is the most valuable piece of work in Dubrovnik’s rich history. 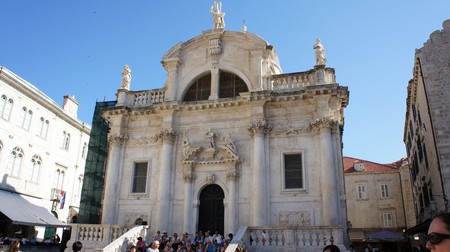